The ‘Old Town Road’ hitmaker has finally secured the No. 1 position on the Billboard chart months after he and his collaborator Jack Harlow unleashed the single.

The track, released on July 23, becomes the countdown’s 1,130th number one, and joins the rapper’s “Old Town Road” and “Montero (Call Me by Your Name)”, which have racked up 19 weeks at the top between them.

Harlow has never hit the top of the charts before, although he came close with “Whats Poppin” in July, 2020 – the track, featuring DaBaby, Tory Lanez, and Lil Wayne, reached number two.

“Industry Baby” is also Kanye West‘s fifth number one as a writer and producer.

Responding to his first number one, Harlow writes, “My first number one. I’d be lying if I said I didn’t see this coming while I was writing my verse. Thank you for having me @lilnasx. This song is something I am gonna be proud to be a part of for the rest of my life. As for what’s next… buckle up.”

Nas X, in the meantime, shares his excitement by writing on Twitter, “IT TOOK A FEW MONTHS BUT WE HERE! THANK U EVERYBODY! INDUSTRY BABY IS THE NUMBER 1 SONG IN THE WORLD! LESSSSSGOOOOOO!” Along with it, he posts a clip of his 2021 MTV Video Music Awards performance with Harlow. 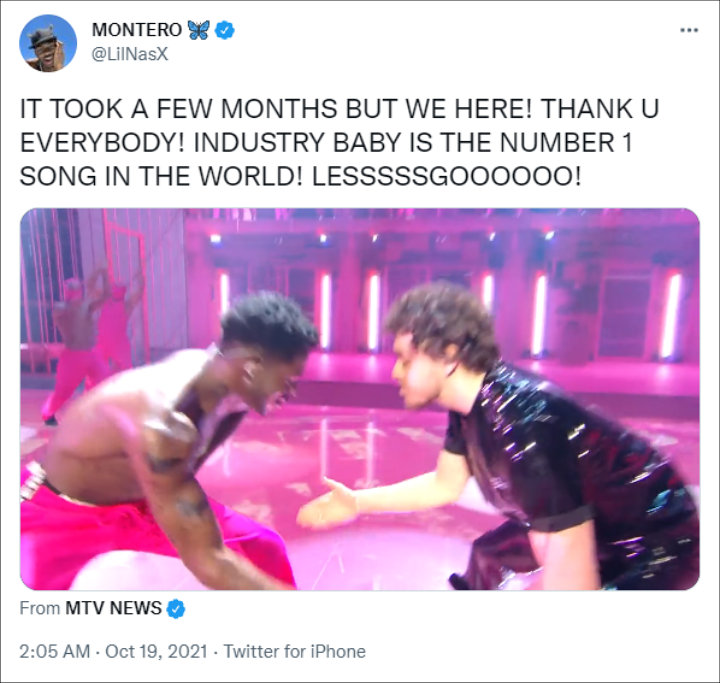 The Kid LAROI and Justin Bieber‘s “Stay” slips a spot to two on the new chart, while Walker Hayes‘ “Fancy Like” holds at three.

Paul McCartney: Why The Beatles Felt The Supremes' Songs Were 'a Bit Boring'

Elvis Presley’s Graceland upstairs bedroom: Were The King’s dogs allowed in his sanctuary?