Malcolm Young: 40 years on the Highway to Hell

Forty years ago today, Sydney hard rockers AC/DC released Highway to Hell, their first album to sell a million copies and make the Top 20 in the United States.

Seven months later their lead singer Bon Scott would drink him self to death in London in 1980, and a year later Malcolm Young, the driving force behind the band, would pay $872,000 for one the best pieces of real estate on the Balmain peninsula, known to locals as "Cockroach Castle". 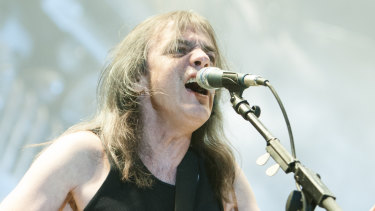 While charismatic singer Scott, and school uniform clad lead guitarist Angus Young may have been the front men for one of the biggest rock bands on the planet, it was his brother Malcolm who was the brains behind the band, a new book claims.

The biography released on August 5, Malcolm Young, the man who made AC/DC, claims the rhythm guitarist with what many have called "the greatest right hand in rock 'n roll" had his hand in not only the band's most recognisable guitar riffs, but also some of its best business decisions.

Buying one of Sydney's most storied homes, Onkaparinga, now worth in excess of $30 million, was one such shrewd decision, according to the book's author Jeff Apter. 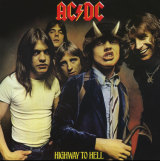 When Young purchased the 1937 square metre stately spread enclosed by a three-metre-high, honey-coloured sandstone wall, it was "a fixer upper" requiring substantial renovations (hence the name "Cockroach Castle") having fallen into disrepair as a boarding house. Members of the Sydney Push would party there and it was said to be the place where Dr Gilbert Bogle went to a party the night before his dead body was found with Mrs Margaret Chandler's on the banks of the Lane Cove River on New Year's Day 1963.

"Onkaparinga was proof of just how far Malcolm had come from the days of struggle street Burwood and the Villawood Migrant Hostel," Mr Apter said.

It was a long way from working-class Glasgow in Scotland, but Malcolm, one of eight children in the Young family, including Angus and elder brother George, founding member of the Easybeats, made it to the top of rock and roll.

“He was the driven one, the planner, the schemer, the behind-the-scenes guy, ruthless and astute, the band's former bassist Mark Evans always said…He was hard with people in the band because they had to share his same level of drive and ambition. So he was tough. But Malcolm's is the ultimate ten pound Pom success story,” Mr Apter  said. 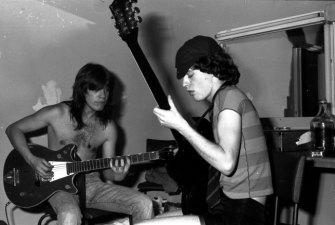 The Young brothers, Malcolm and Angus, at the start of their careers.Credit:Bob King

The book plots Young's story from his days at Ashfield Boys'High to his battles with demons (alcohol) and dementia, which saw him end his days at Lulworth House in Elizabeth Bay. He died at 64 in 2017, a month after his elder brother George.

Apter paints a portrait of a reclusive man, who would retire quietly to the Balmain home he shared with his wife O'Linda and two children. When he moved there neighbours feared the exclusive peninsula would be shook all night long, with noise from wild parties.

They need not have feared though. Young wasn’t often in Balmain; well into the 1990s he was still on the treadmill of recording and touring that had been his life since the band first formed in 1973. He also owned a home in Palm Beach, where they'd often stay. 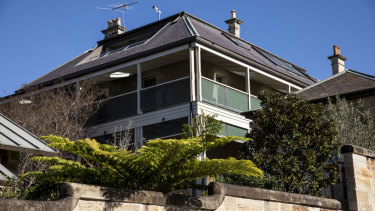 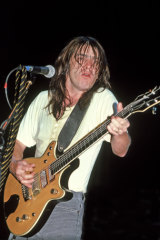 "As one neighbour noted, ‘Malcolm mostly came [home] at Christmas time—he would spend a few weeks.’ Sometimes he and Angus could be spotted together on the verandah.

"Other times Malcolm could be heard noodling away in the attic studio that he had custom-built. His neighbor’s poetically referred to it as Malcolm’s ‘studio in the sky’", the book claims.

Sometimes other music could be heard in the house—his daughter Cara’s latest musical obsession was grunge heroes Nirvana, (Young was no big fan, even though Nirvana’s Kurt Cobain, was said to idolise Back in Black).

Malcolm was described as a good neighbour who would often drink at the local pub and left his keys with his neighbours so they could use his swimming pool when he was not in town.  A tennis court has since been converted into a landscaped garden and Young's son Ross still lives there.

Young had a security camera installed, which still sits atop the home, but rather than use it for scoping out invading fans making a pilgrimage to his house, it was pointed towards the nearby harbour, which he could see from his roof, "so he could have a live stream of the harbour in his lounge room", according to Apter.

"He’d host New Year’s Eve parties for his family; they’d drink in the flawless view of the harbour and the fireworks while Malcolm stood quietly at the back of the room, taking it all in," Mr Apter said.