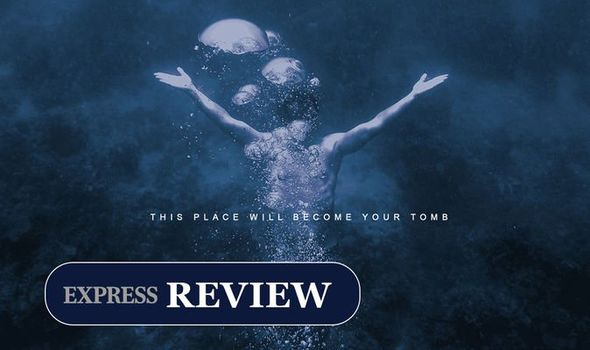 The enigmatic Sleep Token feels like the last of a dying breed. The band’s identities are a mystery (unless you go looking deep enough through Twitter), they wear masks on stage and don’t take interviews. Any other artist using this shtick in the 21st century would presumably be laughed off of Spotify – but Sleep Token really aren’t like any other band. Their first album, 2019’s Sundowning, was a 12-track record of pure bliss. An example of music I, personally, have not experienced before. Their follow up, This Place Will Become Your Tomb, continues that legacy, but will certainly keep their dedicated fans guessing.

This Place Will Become Your Tomb sends Vessel – the band’s faceless frontman – back into the depths of their turmoil – this time with an abundance of water-themed melodies.

In many ways, the opening track, Atlantic, foretells what is to follow in the 12-song album.

The light piano ushers in Vessel’s stunning falsetto that weaves through poetry of going to war for his love; teasing how light and melodic a lot of the record to come is.

Atlantic’s waters soon break, however, into the aggressive second half of the song, welcoming in the guitars and powerful, powerful drums that demonstrate just how versatile the band are.

Hypnosis follows and continues this brutal nature. It is treated like a much more traditional metal song, complete with a breakdown and a palm-muted rhythm section that won’t quit. This is the track you’ll be using to show Sleep Token off to friends from now on.

Depending on your tastes, Hypnosis might be your last welcome surprise in the album.

The previously released singles – The Love You Want and Alkaline – are stunning, and are two of the few tentpoles within the record; with the latter still echoing through my hallways to this day.

But much of the rest of the record is a lot more musically reserved – especially compared to the behemoth that was Sundowning – but that doesn’t mean it’s bad.

In place of breakdowns and hardcore vocals, Vessel plays around with leitmotifs and electronica.

Missing Limbs is a perfect example of this. The song closes out the album and allows Vessel to channel Johnny Cash in a beautifully acoustic ballad that could – honestly – be used to usher a bride down an aisle (okay maybe not, but you get my point).

Before that, Distraction edges the kind of electronic music that sits around the fringes of streaming sites, complete with a dangerously catchy vocal hook and a blast-beat crescendo that will destroy some sound systems.

All of these hits are fantastic, and, crucially, stunningly dense, but listeners looking for the metal-infused stories found in Sundowning might be a little disappointed. But, ultimately, this change is a good thing. It feels like Sleep Token have really grown artistically between albums.

Lyrically, the band have never been better. Their music videos’ imagery focuses on the occult and ye olde magicks, but most of the tracks in This Place Will Become Your Tomb are bleeding-heart love songs.

The almost jazz-infused Telomeres has Vessel crying out: “Your eyes / your lips / are instruments to pick apart the distance within / let the tides carry you back to me.”

This emotional core is exemplified in the album’s third track, Mine, an absolute sleeper hit that is easily the best on the record.

Its simple yet stunning lyrics evoke a certain feeling that I can’t quite put my finger on, but I know I cannot get enough of it. It has to be experienced in reprise to really pick apart its delicate composition.

Not every moment in This Place Will Become Your Tomb is as exquisite, unfortunately.

Some of the album’s songs feel a little stretched (Descending, Like That), but that is manageable in the scheme of things.

On the other hand, the band’s latest single, Fall For Me, is easily the weakest link on the album.

Once again, lyrically Fall For Me is a masterclass in an artist leaning into a theme heavily without taking away from the final product.

In a vacuum, I can see an argument for Fall For Me and its loaded symbolism, but the almost musicless track simply stunts the album. Whether it’s in a playthrough, or on shuffle, it feels out of place within this specific collection of songs.

Will I put it in a playlist of synthwave tracks? Probably. But in this album, it does not belong.

With that said, these few missteps will not be enough to ruin the entire record for fans of the artists.

This Place Will Become Your Tomb is out tomorrow.