“I’ve just done a tour in America with Smashing Pumpkins, and the sight of two goths, one in a Rancid T-shirt, one in a Kiss T-shirt, with their arms around each other, singing “Wonderwall” in Arkansas, is not something you see every day. What is it about that song? It’s crazy.”

He should know — he wrote it. Yet Noel Gallagher is bemused by the enduring cultural potency of “Wonderwall,” more so than any other song in the Oasis catalog. This was a record, remember, which failed to hit Number One in the U.K. (Number Two, behind crooning Brit TV actors Robson & Jerome), Canada (Number Five), and the U.S. (Number Eight) on its release in 1995.

If Gallagher decided to dig deeper into the song’s performance on Spotify, he might find himself even more befuddled. Because, for two years now, “Wonderwall” has shown itself as a fascinating anomaly on the world’s biggest audio music-streaming service: the only pre-Noughties track to consistently appear in Spotify’s daily global Top 200 chart, with the exception of Queen’s biggest smash hits (all of which remain uniquely buoyed by the $900 million-grossing Bohemian Rhapsody movie).

Looking into the Spotify Chart archives, “Wonderwall” began consistently entering the lower reaches of the platform’s global Top 200 list in October 2017, racking up around 570,000 streams per day. It has largely stayed there ever since, even, at one stage, moving into the Top 150 placings.

Although there have been occasions when the song has ducked out of the 200 (particularly during December, when Christmas hits flood Spotify playlists, or when tracks from a blockbuster new album like Post Malone’s recent Hollywood’s Bleeding swarm the rankings), “Wonderwall” has remained on Spotify’s daily global chart for the majority of the past 24 months. By mid-summer 2018, it was pulling in more than 600,000 every 24 hours. As I write this, “Wonderwall (Remastered)” is at Number 182, with 662,635 daily plays. 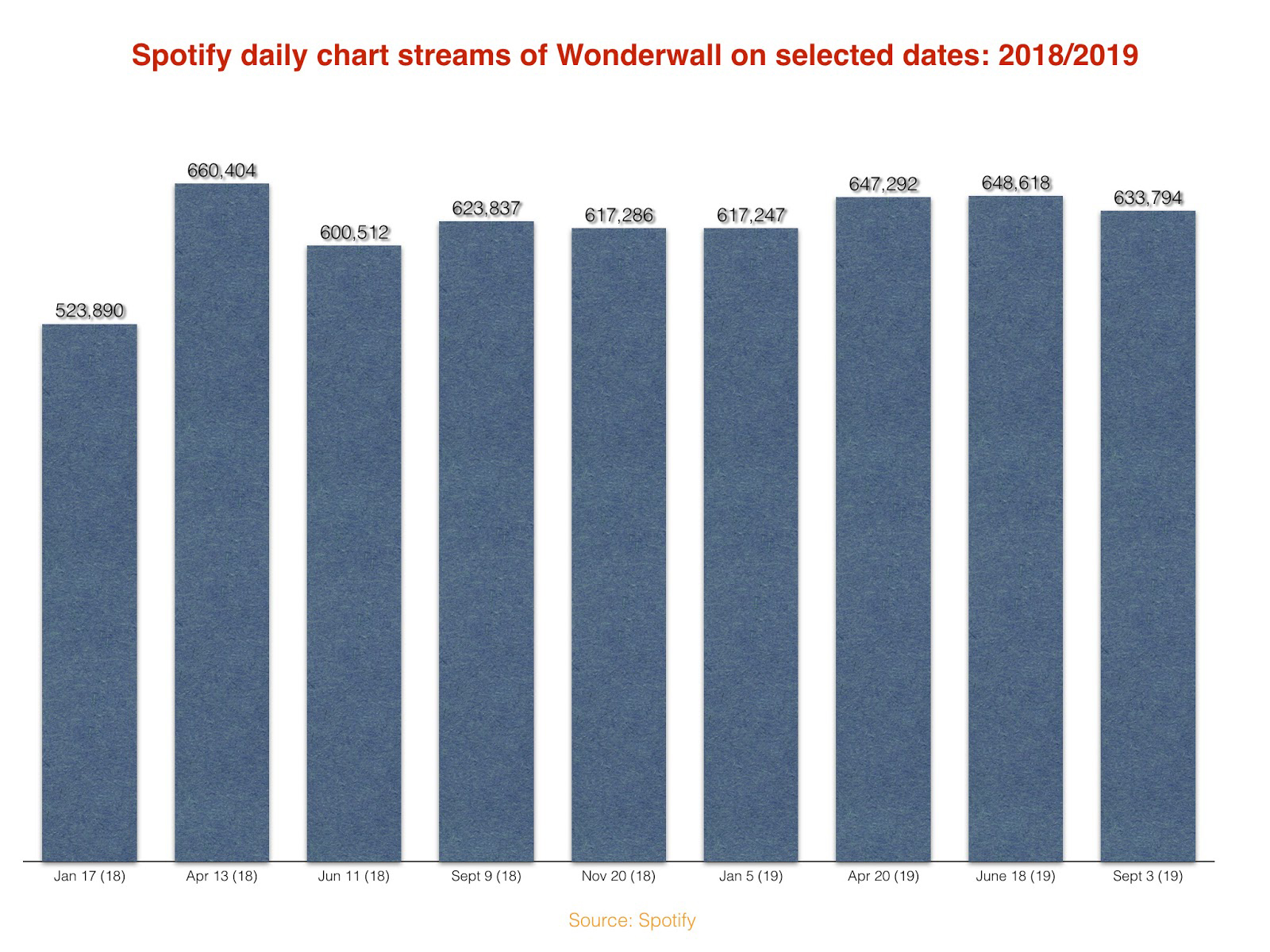 According to Spotify data, “Wonderwall” has accumulated 782.8 million streams on the service in total to date, meaning, at its current pace, it will easily hit a billion within the next 12 months. Cementing its outlier status: The next most popular Oasis song on Spotify, the Noel Gallagher-fronted “Don’t Look Back in Anger,” has almost one third of its momentous tally, with circa 287 million streams to its credit.

There are a few significant things to consider regarding “Wonderwall” as a specific Spotify case study. For one, its ascent to becoming a regular Top 200 entry arrived alongside the successful relaunch of Liam Gallagher’s career, via his debut solo album, As You Were, released on Warner Records in October 2017 (and both Gallagher brothers continue to perform the song, unilaterally, at their concerts). Also interesting: The current “Wonderwall” tally of 660,000-ish daily plays mean it’s generating around $2,650 in recorded music royalties every 24 hours (or around a million dollars a year), good news for its copyright owner, Sony Music. This performance is being fueled internationally. Although “Wonderwall” doesn’t regularly appear on Spotify’s market-specific Top 200 chart for the United States, it’s currently doing around 60,000 plays per day in the U.K., with another 30,000 in Australia — while, according to Spotify stats, Oasis’ most popular territories today are São Paulo, Brazil, followed, in order, by Mexico City; Santiago, Chile; and Buenos Aires, Argentina.

Yet the bigger talking point, on a macro industry basis, about how “Wonderwall” is performing on Spotify is whether or not it represents the first crack in a particularly stubborn dam. According to Alpha Data numbers, “deep catalog” music — i.e., tracks released more than three years before a user hits play — is losing market share on audio streaming services in the U.S. In fact, more than half of all streams on services like Spotify today are of music released within the past 156 weeks — an astonishing stat when you consider that the music biz’s biggest superstars, from the Beatles to Eminem, from the Eagles to Michael Jackson, from Whitney Houston to Adele, released their defining material before 2016.

This trend is potentially discomforting for the major record companies. Not only are modern superstar deals materially more expensive than those from yesteryear, but they also (a) expire faster and (b) see artists paid a more generous share of royalties, up from circa 20 percent during the Nineties (with 80 percent going to record companies) to often approaching 50 percent (or more) today. In other words, when “new” music is streamed, major record companies — who own the bulk of lucrative artist catalogs from the past 100 years — will typically earn a smaller share of royalties than when “old” music is played. Older music still has hefty financial resonance for the majors, however, particularly in the shrinking world of physical retail. For example, twice in the past three years, “catalog” artists have appeared within Universal Music Group’s five biggest acts on an annual revenue basis: In 2018, it was the Beatles; in 2016, it was the Rolling Stones.

There is evidence that an older demographic — one which favors Little Feat over Lil Tecca, figuratively speaking — will become a greater influence on streaming in the years ahead. According to a report (“Going After Grandma”) published by the investment-banking advisory firm Evercore, approximately 14 million users in the U.S. ages 55 and over will become mobile internet users for the first time between 2017 and 2021. Evercore says this group has a “a 30 percent greater annual purchasing power than millennials and represents at least $1.5 trillion in net wealth.” (This might explain why Spotify, which has traditionally focused entirely on millennials and Gen Z, recently switched to targeting middle-aged types whose careers have eclipsed their passion for music via a nostalgic U.K. marketing campaign. Example text: “1979: London Calling; 2019: Conference Calling.”)

Where does “Wonderwall” fit in against this backdrop? It’s hard to know until we’re sure who, exactly, is playing it 600,000-plus times per day on Spotify. A recent clue may have come from Spotify’s own research, showing that just 30 percent of streams of the Beatles right now are spun by those between the ages of 18 and 24.

Some very senior music industry people I’ve spoken to this week believe that “Wonderwall” might well prove to be a dam breaker — that older music is about to ramp up its market share on Spotify as baby boomers and Gen Xers pony up for subscriptions. The natural consequence, they say, will be that evergreen records will often, slowly but surely, win the “hare and tortoise” streaming fight against modern hits, which, comparatively, tend to explode quickly then fizzle out. (“Wonderwall,” by some distance, isn’t keeping pace with the likes of “Old Town Road” on Spotify right now, but it is interesting that the Oasis track has been streamed around 40 million times since August 9th — the same volume as a flagship, though by no means commercially barnstorming new single from Katy Perry.)

Other industry figures offer more skepticism on this trend. They suggest that, regardless of how many credit card details an older generation might hand to Spotify, one factor will forever skew the relative power of music streaming’s audiences.

As one esteemed L.A-based record industry figure told me last week: “When the Beatles came through in the Sixties, teenagers were playing their music over and over, every day. Their parents were out at work, busy with grown-up lives, so Mom and Dad’s favorite artists, in terms of total plays in each household, lost out. Nothing’s changed, except today teenagers are playing Post Malone or Lizzo or Drake over and over, and it’s the Beatles who get sidelined.”

The crucial difference being, on modern streaming platforms, an artist’s total share of royalties is directly equal to their total share of plays – an outcome largely driven by young people with time on (and cell phones in) their hands.

Tim Ingham is the founder and publisher of Music Business Worldwide, which has serviced the global industry with news, analysis, and jobs since 2015. He writes a weekly column for “Rolling Stone.”