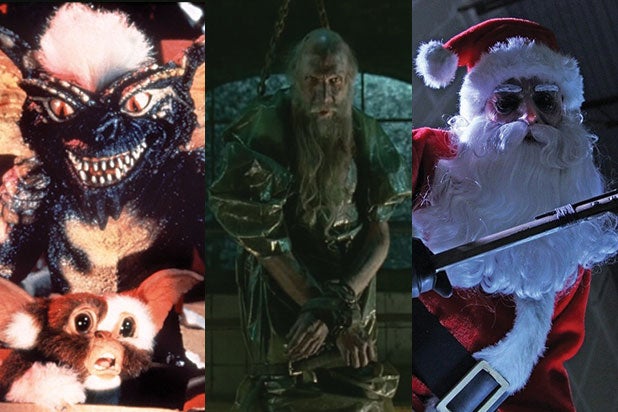 A look at top-grossing holiday shock-fests that have inspired ho-ho-horror — including last year’s “Black Christmas” remake.

Malcolm McDowell, Jaime King and Donal Logue star in the film about a murderous Santa who picks off people one by one.

Olivia DeJonge plays a babysitter who must protect a 12-year-old boy after a home invasion while his parents are out at a holiday party.

The film follows a group of people living near the Korvatunturi mountain who discover the secret behind Santa Claus.

In this comedic musical with grossout touches, a teenager and her friends ward off the zombie apocalypse when it comes at Christmas-time.

In the slasher film, a young boy loses his parents and years later becomes a spree killer in a Santa costume.

A second remake of a 1974 Canadian film, starring Imogen Poots, Aleyse Shannon, Lily Donoghue and Brittany O’Grady, this slasher film about sorority sisters fighting off a stalker takes a stab at feminist themes.

Michelle Trachtenberg, Lacey Chabert and Katie Cassidy star in the slasher film about sorority girls getting murdered one by one (a remake of a 1974 Canadian film).

A boy in a dysfunctional family turns his back on Christmas — and accidentally unleashes a demon force as a result.

The movie follows a young boy who breaks rules and unleashes a horde of mischievous monsters.