A Place in the Sun: Danni says property needs a 'lick of paint'

During Wednesday’s instalment of A Place in the Sun, Channel 4 host Danni Menzies was on a mission to find Colin and Elspeth from Edinburgh their dream holiday home in Menorca. The couple, who had been on holiday to Menorca for the past 20 years, wanted to take the plunge and buy a property so they could retire there one day. The couple had a budget of £150,000 to spend and with that, they were hoping to find a two-bedroom villa with a good outdoor space. They also wanted a kitchen that was separate from the lounge and Colin explained a swimming pool would be a “bonus”. However, before they had even stepped inside one of the potential properties, Danni had to pre-warn the couple about the colour of paint on the walls.

The first property Danni took the couple to was a three-bedroom villa that was priced within their budget.

“It looks really good,” Colin said as he noticed the property came with a swimming pool.

“I think it’s a nice size,” Elspeth pointed out as they walked into the living room.

The villa also came with a large outdoor space with a seating area and a roof terrace for Colin’s stargazing. 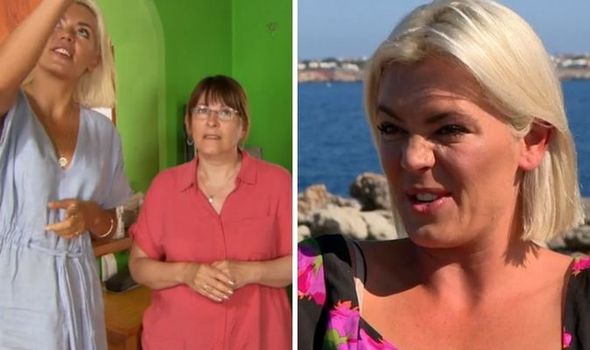 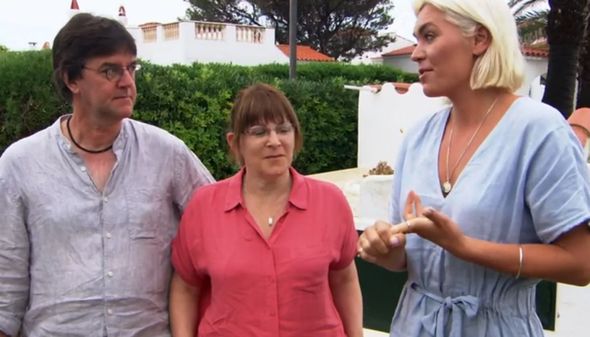 Danni admitted she was a little bit concerned about the privacy element, although the couple appeared to be impressed with the property.

They went on to tell the property expert that the villa was “definitely a contender”.

The second property Danni took the pair too had more privacy although, it didn’t come with a swimming pool.

“It looks really pretty,” Colin said as the property expert showed the duo the outside space. 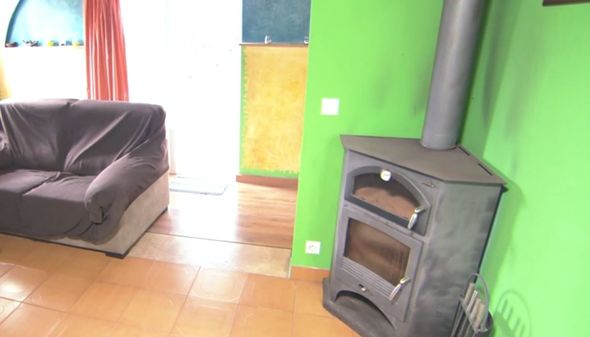 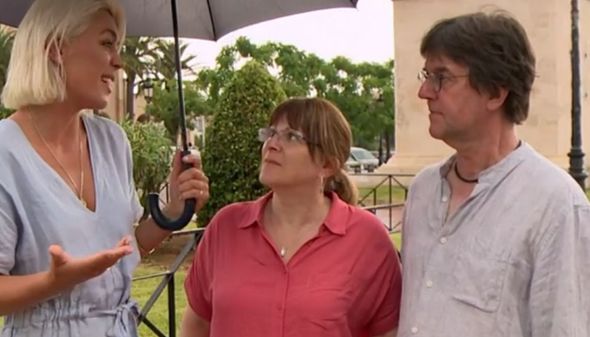 “It has a better feeling to it,” Colin added when Danni asked how it compared to the first property.

Speaking about any negatives, Elspeth continued: “The only slight negative to me is that it’s slightly noisier here.”

The third property had two bedrooms and a swimming pool which was everything the couple wanted, but before they went in, Danni warned the couple that they needed to “imagine it with a lick of paint”.

When they entered the villa, the couple were stunned to see the living room had been a painted bright green colour.

However, Colin and Elspeth appeared to see past the cosmetic work as they loved how much privacy they would have if they lived there.

They also were pleased to see that they had a large outdoor space with a sea view.

“Wow,” Elspeth simply commented as Danni explained: “It’s very green. I did mention you might want to give it a lick of paint.”

Colin weighed in: “You could walk in and live here for a while before actually changing the paint.”

“Do you find it quite easy to see past that?” Danni as Colin replied: “It needs a bit of TLC but the space is okay.”

The fourth property was also a winner as it seemed to have everything the couple were looking for – and it was even on the market for less than their budget.

However, after viewing the villa, Colin and Elspeth decided that it just wasn’t for them.

The pair seemed to rule the fifth property out straight away as they admitted they weren’t keen on the area.

When it came to making a decision, the duo decided to put an offer in on the villa with the bright green walls.

They told Danni that they were willing to overlook the bright green paint and so they put in an offer for £160,000.

The current owner turned down their initial offer but accepted an offer of £162,000.

A Place in the Sun airs weekdays at 3pm on Channel 4.