Alison Hammond has explained how she tries to protect herself if she feels threatened while walking alone on the streets, saying that she makes herself ‘walk like a man’.

On Wednesday’s edition of This Morning, co-hosts Alison and Rochelle Humes were joined by Gyles Brandreth and Elizabeth Day to discuss the latest news headlines.

One of the topics of conversation that came up was the news that nearly half of women feel unsafe walking alone after dark, with around the same number feeling unsafe while walking alone in busy public places at night, according to the Office for National Statistics.

Alison remarked that she believes ‘it’s an innate thing’ for women to feel unsafe on the streets.

The TV presenter began to explain that she feels threatened ‘even though I’m a big girl’, at which point Rochelle interjected to say: ‘But that’s nothing to do with it!’

Alison continued, saying: ‘No but seriously, the fact that I’ve got my hood on, sometimes I pretend to walk like a man. I know it sounds crazy, but in protection mode, if I feel threatened in any way, I put my hood up, if I’ve got a hoodie, and I will start walking like a bloke, so that I can protect myself.’ 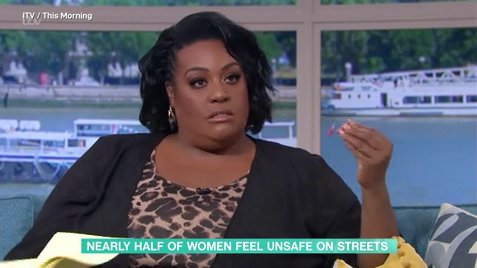 The TV personality also outlined what she would do ‘if someone did try and kidnap me’, explaining that she would make herself ‘literally dead weight’ to prevent an attacker from abducting her.

‘I’d be like, “Try and kidnap this”,’ she said, before bursting into laughter.

Today’s edition of This Morning marked Alison’s return to the ITV programme, having been absent for the past couple of days.

Alison was forced to pull out of the show earlier this week due to a mystery illness, resulting in Eamonn Holmes taking her place.

Eamonn also presented Tuesday’s show, which was supposed to be guest hosted by Vernon Kay with Rochelle.

However, Vernon announced that he would no longer be able to front the programme after testing positive for coronavirus, saying that he was ‘gutted’ by the turn of events.

This Morning airs weekdays at 10am on ITV.