AMANDA Holden flashed her toned legs in a stunning rainbow dress as she embraced the "Easter vibes".

The 50-year-old star looked stylish as ever as she posed wearing a colourful thigh-high split dress at Heart Radio. 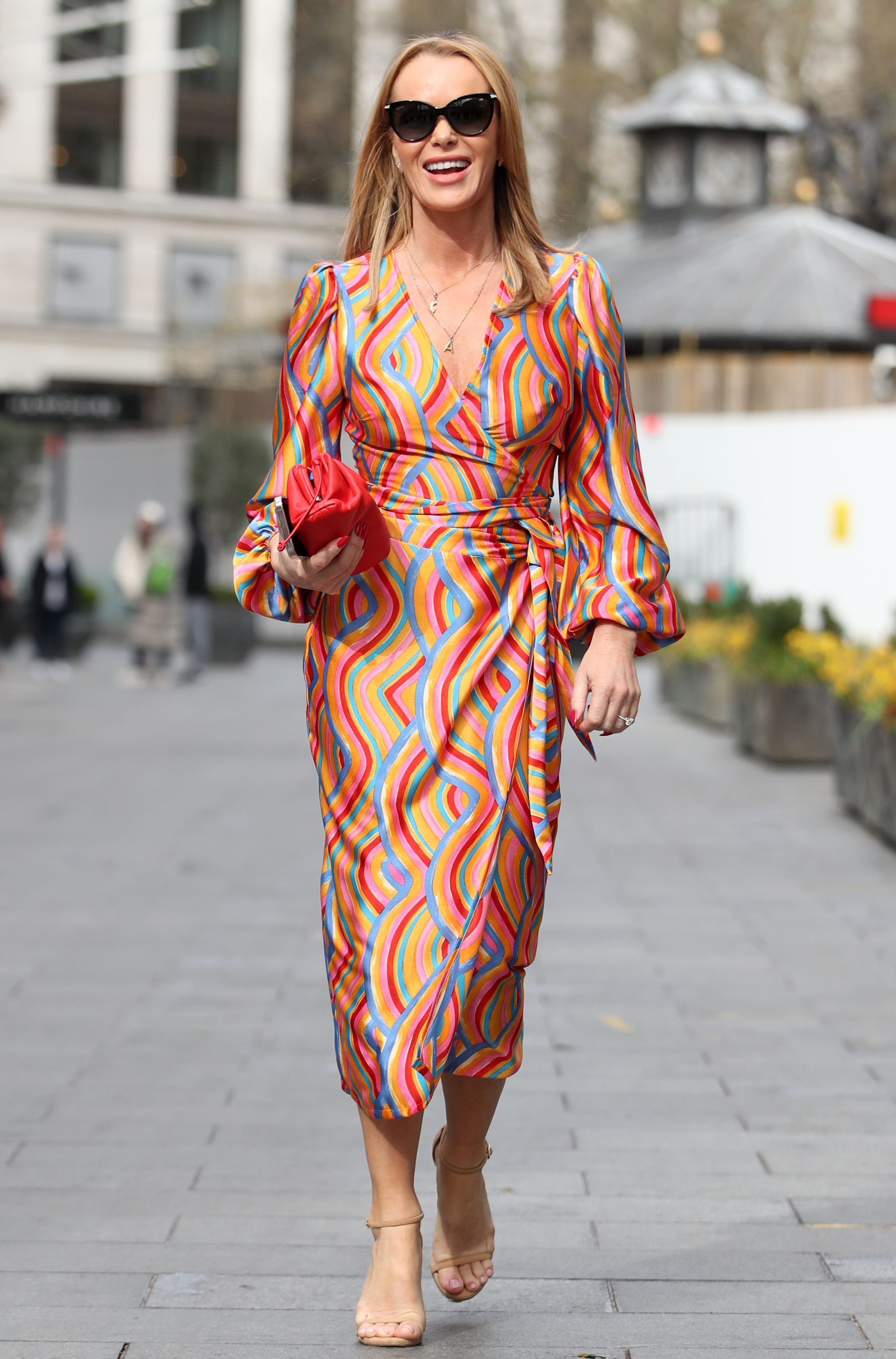 The BGT judge oozed glamour as she soaked up the sunshine in a stunning wrap dress with a low neckline.

Amanda embraced the gorgeous British weather as she stepped out in a pair of opened toed nude sandals and carried a bright red designer clutch bag.

The mum-of-two looked elegant as her blonde locks were styled in a sleek, straight hairdo and she wore a rosy pink lip.

Amanda teamed her look with a pair of black shades and a pendant necklace with the letter A. 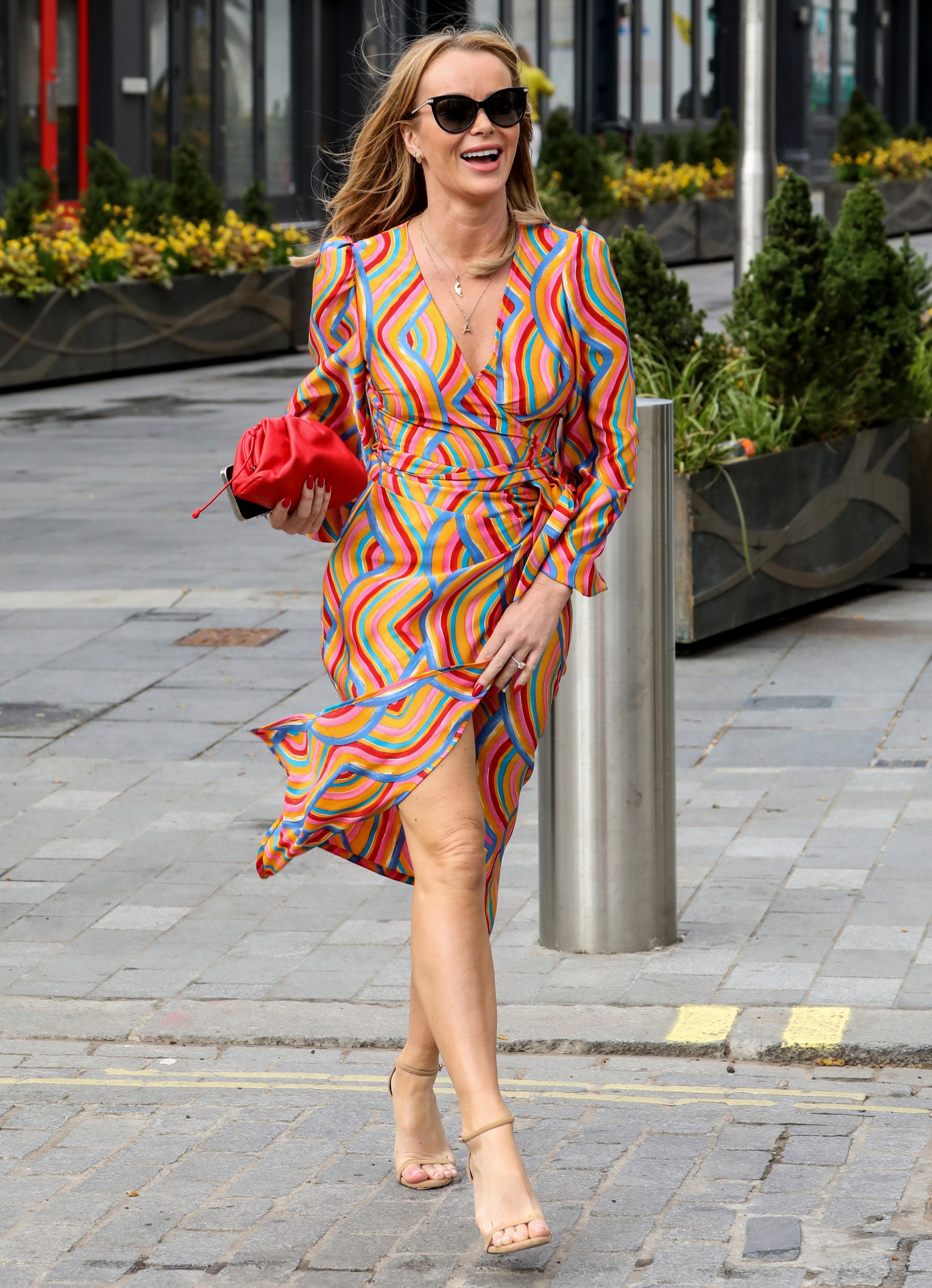 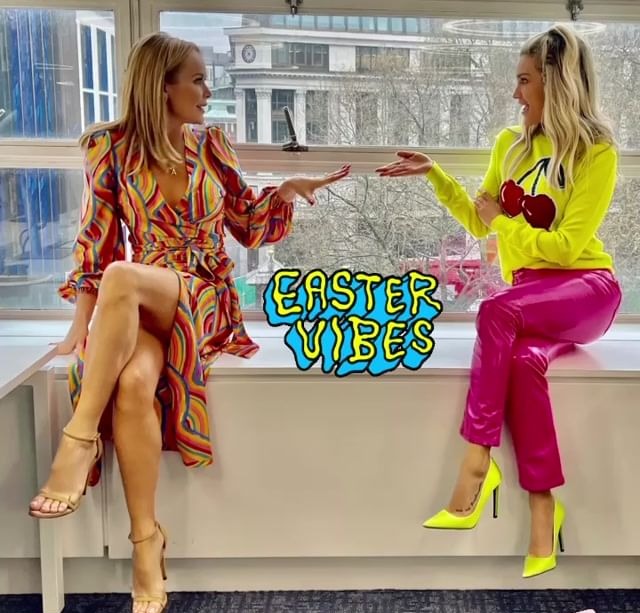 The TV star shared a snap with her fellow co-host Ashley Roberts as they perched on the window ledge giving fans a glimpse of their eye-catching ensembles.

The mum-of-two shared the snap on her social media, captioning it: "Easter vibes".

The Pussycat Doll also went all out to brighten up our week with a pair of skintight neon pink PVC trousers.

The popstar completed her vibrant look with a pair of equally striking neon yellow heels and matching jumper with a large cherry logo. 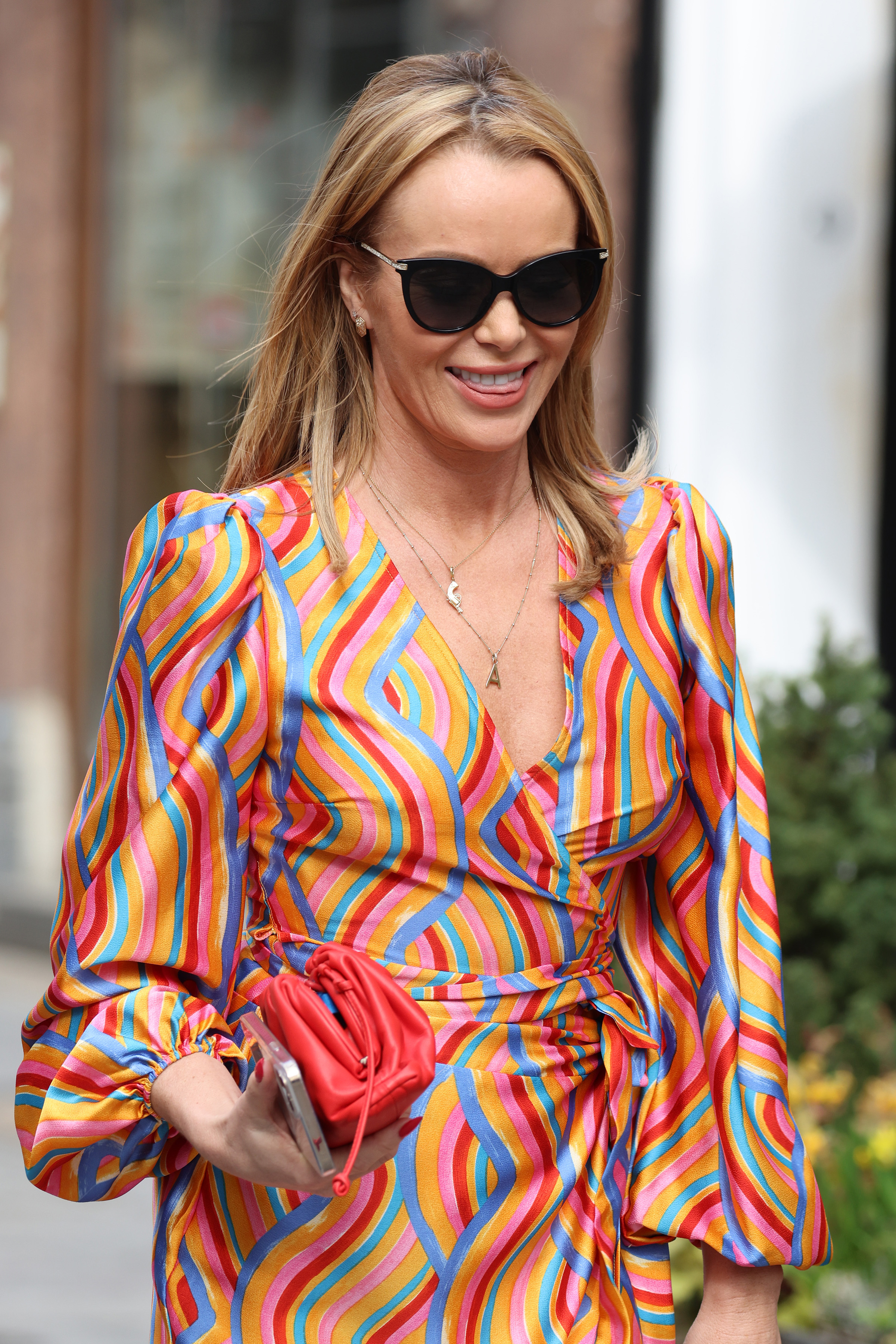 The radio stars have been embracing the glorious British weather as they showed off their Spring wardrobe.

Yesterday Amanda went braless and Ashley Roberts flashed her tanned legs on the hottest day of the year so far, as temperatures reached 21°C in London.

Amanda rocked a gorgeous ditzy floral dress with a low neckline, meanwhile, the Pussycat Doll star went bare-legged as she made the most of the Spring sunshine.

The popstar looked the epitome of chic in a cream pleated mini-dress and matching heels. 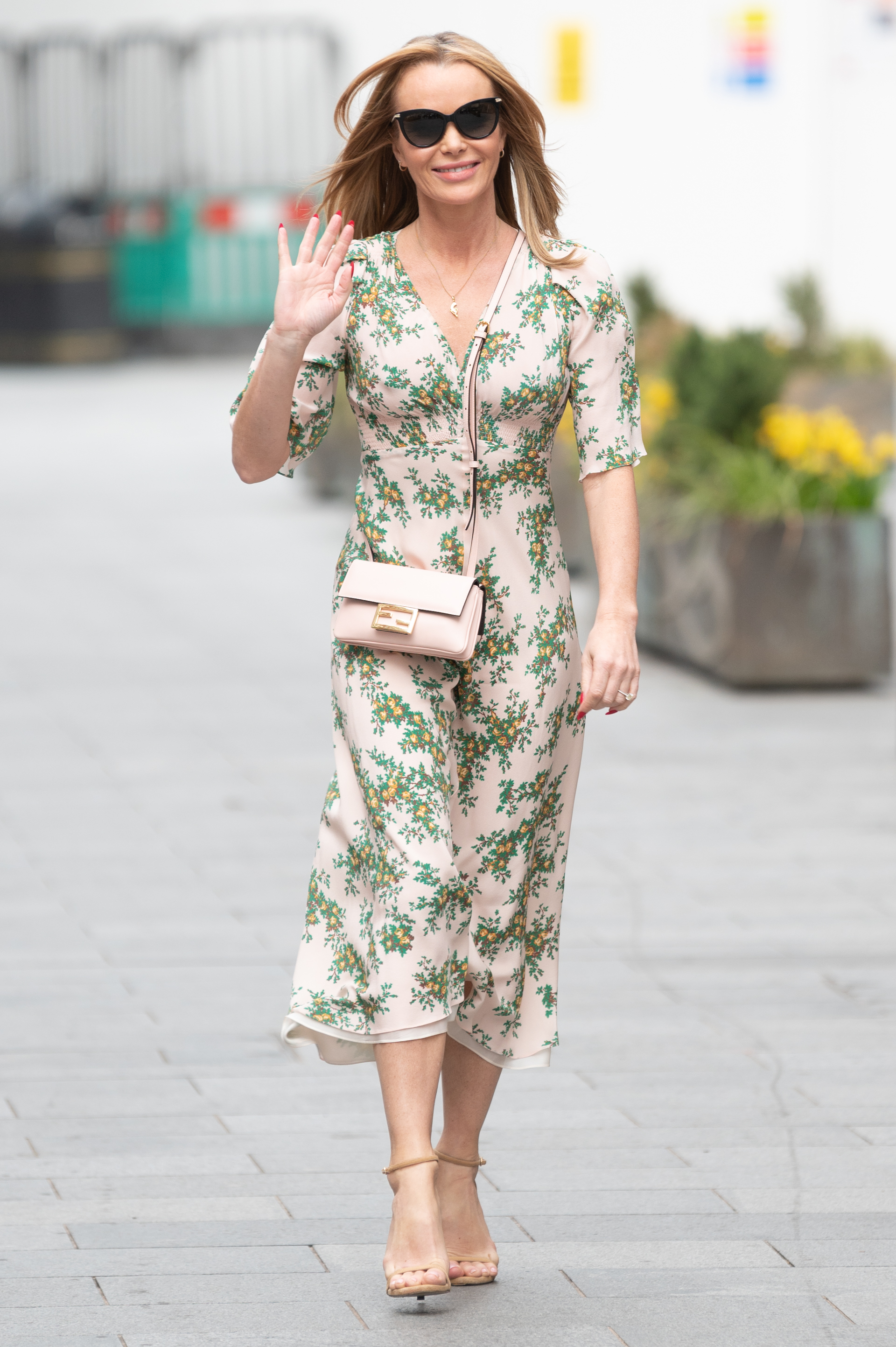 The blonde beauty showed off her toned pins as she enjoyed the glorious weather.

Ashley has also been in talks about a Pussycat Dolls reunion – last week we revealed the band are on the brink of signing a major new management deal.

The move means more new music from the girls is likely to arrive soon. 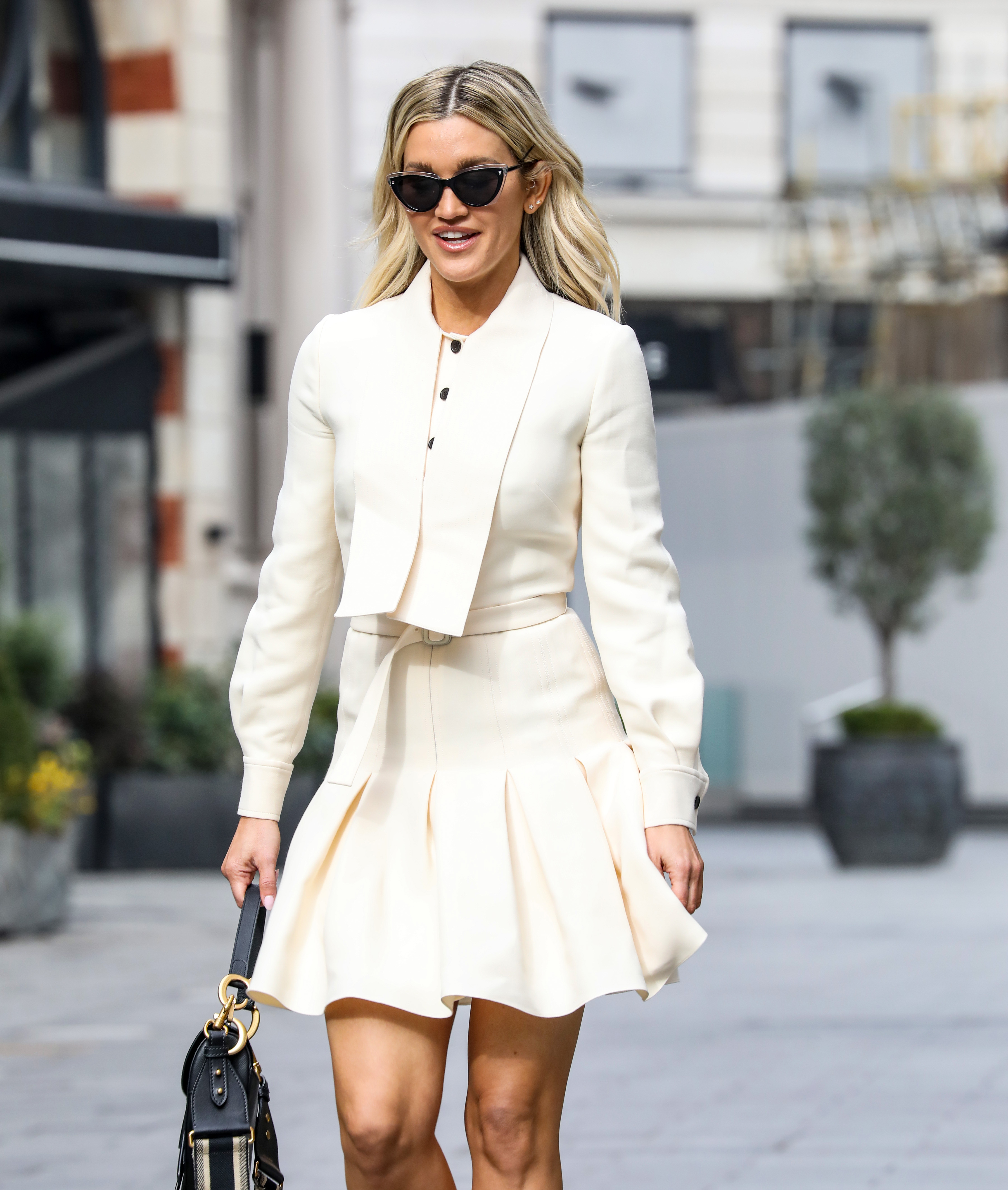 A source said: “The pandemic has hampered plans for The Pussycat Dolls but as far as they are concerned, they’re all raring to get going as soon as it’s safe to do so.

“This new team is great news for them and they’ve got a handful of songs which they are plotting to release when they can all safely get together again."

Her equally glam co-host Amanda is set to front a hilarious new BBC talent show called I Can See Your Voice with Paddy McGuinness.

The pair will star on the brand new mystery gameshow, which will air on BBC One this Spring.