The 90 Day Fiance: The Other Way season finale brought plenty for fans to watch, with one of those stories being Biniyam and Ariela’s engagement.

Biniyam popped the question to Ariela while celebrating a popular Ethiopian holiday called Timkat. Now that everyone knows the couple wound up engaged, fans wondered how Ariela felt in the moment.

Ariela was emotional during the proposal

The Ethiopian holiday of Timkat is one that celebrates the baptism of Jesus in the River Jordan. During this holiday the people all gather to share in the joy.

Biniyam explained to Ariela that it was one of his favorite holidays. The orthodox holiday also includes traditions such as priests spraying the crowds with holy water.

Another fun tradition is for the men to toss lemons at the women as a way to show romantic interest in them.

This particular tradition played a big role in the proposal.

After an emotional day, Ariela had just come back into the crowd to make up with Biniyam, when he led her to an opening saying that he wanted to show her something.

When they arrived, Biniyam asked Ariela if she would do something for him, since she had just mentioned that she loved him.

He then dropped to one knee and asked her to marry him. The sweetest part was that the engagement ring had been placed inside a lemon that Biniyam had cut in half like a traditional ring box.

Of course, she accepted, and their storyline ended on a high note.

On Instagram, Ariela shared a fan story that said they “cried like a baby” during the proposal, and after watching the show, other fans can understand why. 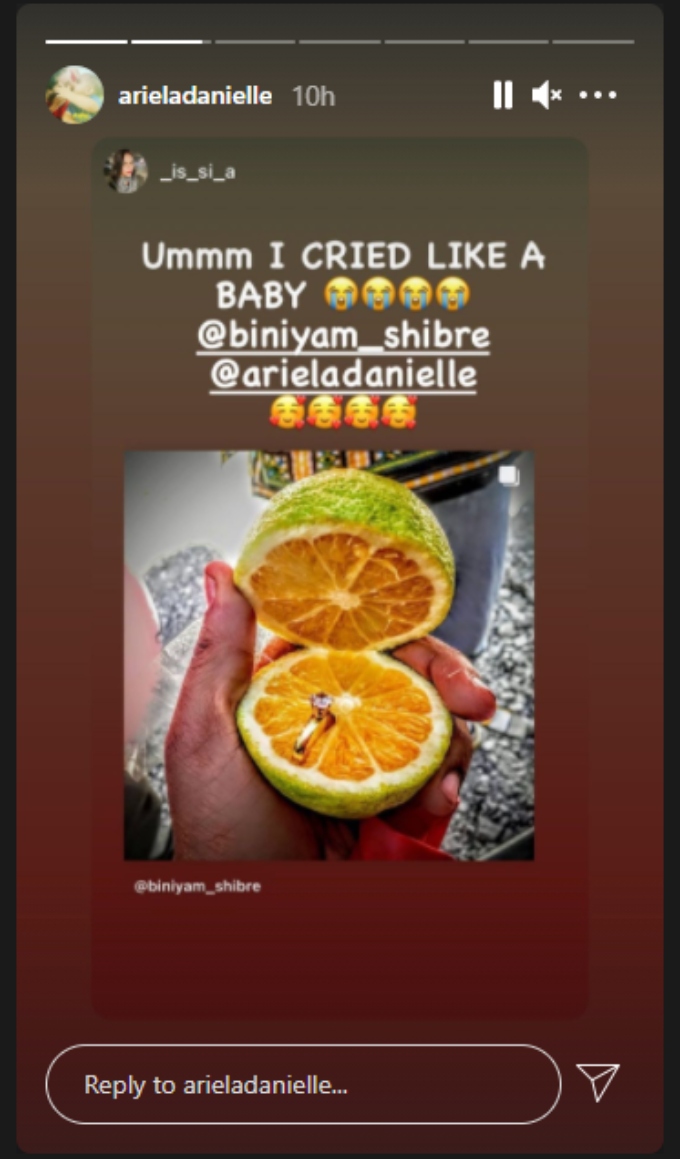 Prior to their engagement, Ariela and Biniyam fought when she was quickly overwhelmed by the crowds at Timkat.

Baby Aviel was just a month old at the time, and Ariela worried that he would wind up injured as they were being pushed around in the crowd.

Biniyam did his best to keep the argument from getting too heated. He took Ariela and Aviel out of the crowd and to his brother’s house so she could nurse him.

Ariela explained to Biniyam that he needed to prioritize his family and that it wasn’t about him or his favorite holiday anymore, it was about them and their family.

When Biniyam walked away to get some space between them, Ariela had a chance to reflect on the fight and ultimately decided that it wasn’t worth ruining the day over.

Her change of heart led to her finding Biniyam in the crowd and telling him that she loved him. That seemed to be the confirmation Biniyam needed to follow through on the proposal.