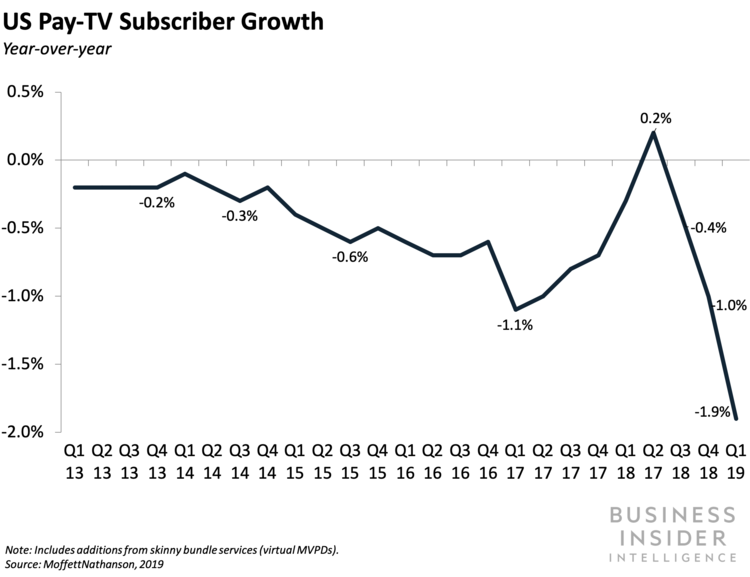 AT&T now has 22.9 million video customers across its video offerings, of which 21.6 million are on its satellite pay-TV service via DirecTV and the fiber-TV service U-verse, and about 1.3 million subscribe to DirecTV Now.

Cord-cutting continues to erode AT&T’s video business, and its skinny bundle — once positioned as a solution — is increasingly part of the problem too. Satellite TV in general — DirecTV and Dish Network — has absorbed the bulk of overall cord-cutting losses, with satellite TV subs falling by2.36 million in 2018, up from 1.55 million in 2017, per Leichtman Research Group estimates.

For its part, AT&T’s pay-TV customers are down about 9% year-over-year (YoY), while the sub base of its skinny bundle service DirecTV Now fell 26% YoY. AT&T attributed the loss to subs continuing to roll off of promotional discounts, which has dented the skinny bundle in particular.

Afterraising prices and removing some channels, DirecTV Now has encouraged churn among less profitable subs: The service lost 267,000 in Q4 2018, 83,000 subs in Q1, and now 168,000 in Q2. While losing unprofitable subs is arguably a net positive, the fact remains that the service is no longer growing.

AT&T’s losses are far from company-specific — live linear TV viewing is collapsing across the board, likely among the drivers causing more and more consumers to cancel their service altogether.

Traditional (live linear) TV viewing is down across nearly every demo younger than 65, and most significantly among younger demos: The average number of hours of pay-TV watched per month among 12-17 year olds has fallen64% since 2010, 62% among viewers ages 18-24, and 51% among viewers ages 25-34, according to Nielsen data, per analysis by Matt Ball.

That decline has coincided — and likely correlated — with secular declines to the US pay-TV ecosystem: US linear and skinny bundle operators lost a combined 1.4 million video customers in Q1 2019, up75% YoY.

Shifting to direct-to-consumer streaming could eventually help AT&T offset losses from cord-cutting, making the success of its forthcoming HBO Max service critical to the future of its media business. AT&T’s forthcoming direct-to-consumer SVOD, HBO Max, is set to launch in spring 2020 at$16 or $17 a month, and will include HBO programming, exclusive licensed content like “Friends” and Warner Bros. movies, and potentially livesports and news.

But this transition will not be smooth: Even if AT&T manages to convert HBO Now subs to HBO Max, direct-to-consumer SVOD is equally if not more prone to churn than pay-TV. But the writing is on the wall: Satellite TV is low oncustomer satisfaction, and delivery is cumbersome compared with the internet, meaning traditional media companies have little choice but to play ball.