VOD is for more than low-budget action movies. Janelle Monae, Millie Bobby Brown, and Jessica Chastain rule this week, starring in three distinctive films available only to home audiences. “Enola Holmes” on Netflix, and “Ava” are new to VOD this week, while the premium-price “Antebellum” is riding high in its second weekend at $19.99.

“Ava,” released September 25, currently sits at #1 on both AppleTV and Google Play at a standard new-release price of $6.99. It was a troubled production: Matthew Newton wrote the film (originally titled “Eve”) and developed it with Chastain, who stars as an assassin in a secret organization. However, he stepped down as its director about a month before production began in September 2018 after facing public backlash to his past charges of domestic violence and assault. (Newton pled guilty.)

Tate Taylor, who previously directed Chastain in “The Help” and “Ma,” replaced Newton; after the film wrapped, it was retitled “Ava.” With a supporting cast that includes Common, John Malkovich, Geena Davis, Colin Farrell, and Joan Chen, it debuted in Hungarian theaters this summer and then became an exclusive for DirectTV subscribers in August. (It also played in 222 North American theaters, where it grossed $170,000. Per Box Office Mojo, it grossed $2 million worldwide.) It is #2 at the revenue-driven FandangoNow, despite its non-premium price.

“Antebellum” is showing broad strength, including #1 at cable provider Spectrum (which charts through Thursday, precluding “Ava”) and #2 at Google Play. Along with Apple TV (#6), these rank by transactions. At FandangoNow and Vudu, where revenue is the gauge, it repeated as #1. The film seems to be gaining attention through controversy, always helpful in sustaining beyond first-week attention. It also has come out during a hiatus period, as studios refrain from replacing theatrical with VOD releases.

In its second weekend, IFC’s horror entry “Alone” placed on three of the four charts, as high as #3. This makes it one of the top of their many pandemic releases, a continuation of what they have done for years with many genre titles.

Other first-time entries this week on the charts: South Korean animated title “Red Shoes and the Seven Dwarfs,” faith-based revenge thriller “Beckman,” and the Moscow-set horror title “No Escape.” 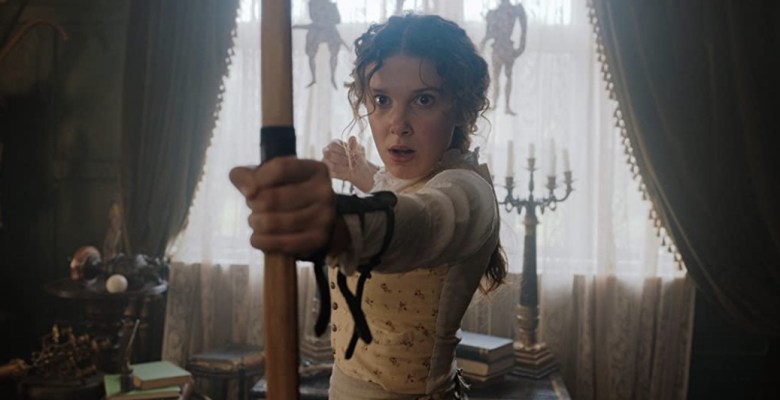 Likely above all of these in viewership was “Enola Holmes,” with its multi-day rank as the #1 movie at Netflix (though beaten out by episodes of the new Ryan Murphy series “Ratched”). The Sherlock Holmes offshoot features teen star and Emmy nominee Millie Bobby Brown from another Netflix hit, “Stranger Things.” The director of “Enola Holmes,” Harry Bradbeer, helmed all but one episode of “Fleabag,” and the script is adapted by Harry Thorne (“His Dark Materials,” “Wonder”).

Persisting on the high-metabolism Netflix list is the acclaimed documentary “The Social Issue” as well as the “The Devil All the Time.” The latter, with major star power in Tom Holland and Robert Pattinson, did briefly take the top spot for two days but has settled down to the bottom half of the list.

Ranked by number of transactions, with position as of Monday, September 28

Ranked by revenue accrued not transactions, for September 21 – 27

5. The King of Staten Island (Universal)

Ranked by number of transactions, with the daily position as of Monday, September 28

Sign Up: Stay on top of the latest breaking film and TV news! Sign up for our Email Newsletters here.