Carol Kirkwood, 57, is a regular face on BBC Breakfast, known for presenting the weather forecast on a daily basis.

Having presented the segment for many years, Carol has gained quite the grasp on understanding weather patterns and how global forecasts play a part in temperatures hitting the UK.

This morning however, one viewer noticed Carol made a mistake during her forecast as she tried to explain the current humidity gripping the UK.

Beginning her forecast on BBC Breakfast, Carol said: “We’re going to turn that bit hotter over the next few days.”

Thanks Carol Kirkwood for the geography lesson

The weather presenter continued: “The air source is North Africa, Algeria in the next couple of days seeing highs of 48/49 degrees.”

With the screen behind her showing a map of Spain, France and Switzerland, Carol went on to explain the high temperatures in the UK’s neighbouring countries.

However, Carol may have mistaken France for Portugal as when speaking about the country adjacent to Spain, she pointed to the South of the France.

The other option is that the BBC had technical difficulties with their screens and the map was in the wrong place at the wrong time during Carol’s forecast.

“But in mainland of Spain, Portugal and Switzerland for example, seeing into the low or indeed almost the mid 40’s,” Carol explained, pointing at the countries displayed in the order she spoke them, except for Portugal, which was positioned behind her.

Taking to Twitter, one viewer quipped: “France is now Portugal. Thanks Carol Kirkwood for the geography lesson. #BBCBreakfast.” 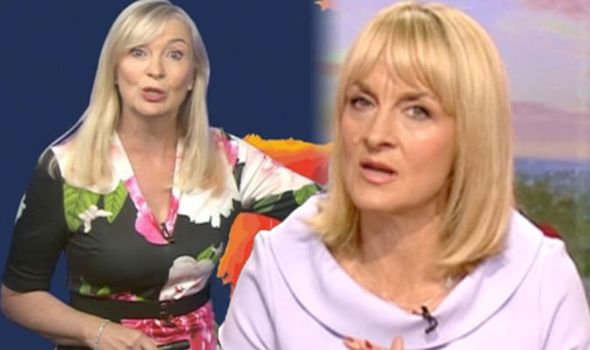 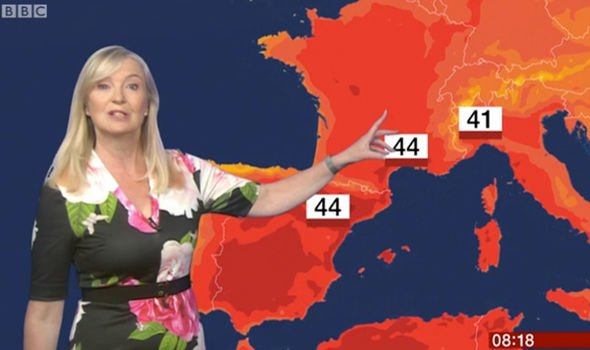 Carol did seem to rectify the error, as when the weather presenter went on to speak about France, she pointed to the right location on the map.

“Now the highest temperature ever recorded in France, in any month actually was 44.1 celsius in Garde in the South of France.

“That was in August in 2003. We’re forecasting temperatures on Thursday and Friday of 44 degrees,” Carol said.

On yesterday’s programme, Steph McGovern, 37, joined hosts Louise Minchin, 50 and Jon Kay, 49, to report the business news with an image displayed behind her causing a stir.

The reporter warned human jobs could be at risk because they are being replaced by robots, with a graphic of such a mobile device seen on the screen behind Steph. 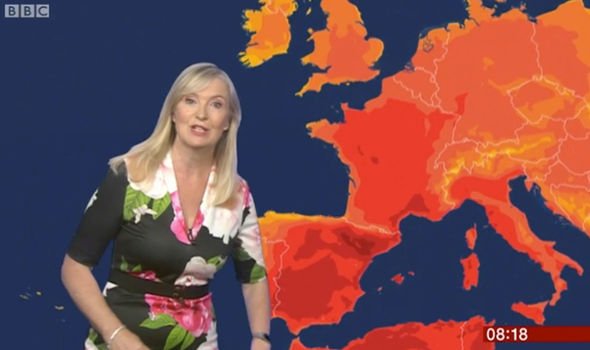 Presented on the screen, viewers and the presenters could see the robot had five digits on its hand, with one pointing outwards.

The graphic caused a stir online however, as the graphic looked as if it were pointing its middle finger at the presenters.

One viewer wrote on Twitter: “@BBCBreakfast is that robot giving the middle finger..?”

Another asked: “@BBCBreakfast was that picture of a robot sticking up its middle finger?”

A fourth added: “@BBCBreakfast are talking about the #RiseOfTheRobots and technology taking over… is it just me, or does the #Robot in their graphic look like it’s giving them the finger? #RudeRobot #BadRobot #Robots #ThisIsOurFuture #BBCBreakfast.”

BBC Breakfast airs weekdays at 6am on BBC One.