When the part of Jerrie on ABC’s Big Sky came into Jesse James Keitel’s orbit, there was some hesitation on her part to go in for the audition. The actor, who is the first nonbinary series regular on a primetime drama on broadcast TV, felt there was something slightly off and simplistic about the character. After having an open dialogue with writers and producers, the role of Jerrie transformed into something Keitel — who uses the pronouns she/her and they/them — felt was truer to “a queer person in 2020” and reflected the complexities of the trans experience.

On the David E. Kelley series, Keitel’s Jerrie is a nonbinary transfeminine sex worker with aspirations of becoming a professional singer who is abducted by truck driver Ronald Pergman (played by a very unsettling Brian Geraghty), possibly for a sex trafficking ring, at a Montana truck stop. In Tuesday’s episode, “Nowhere to Run,” Jerrie exercises her power over Ronald after he forces her to take off her clothes and shower in ET’s exclusive sneak peek. In that moment, she chooses to reveal herself to him, lording over her abductor as she turns what could have been a debilitating character moment into one of sheer bravery and strength.

“I’m not playing a sex worker who has no lines, I’m a leading character on ABC. I think that’s really damn powerful,” Keitel tells ET of her groundbreaking role. “What I’m most proud of, I’m excited for the little queer kids at home to look up and be excited to see me on TV and hopefully see a little bit of themselves in Jerrie. I’m excited for their parents to watch and say, ‘I hope I do right by my kids.'”

Ahead of Tuesday’s episode, Keitel opened up in a candid conversation with ET about her early hesitations with playing the character of Jerrie, what changes the producers made to make the role more reflective of the queer experience, her initial fears over filming Jerrie’s shower scene and what she hopes viewers get out of the powerful moment. (Plus, Keitel credits the premiere-ending shocker as piquing her interest in the series.)

ET: How did you first get involved with Big Sky? Were you familiar with the book by C.J. Box?

Jesse James Keitel: I did not hear of the book. but I had heard of C.J. Box before. I got an audition for this David E. Kelley project. I was excited about it, but I really wasn’t very thrilled about the character at that time. It didn’t feel like the representation I wanted to bring to TV. But my agent convinced me to still go to the audition. I ended up booking it and they ended up talking to me, having a real conversation about who I think this character is, who I think the character could be. I was like, “You guys laid the groundwork. I’m just going off of what you wrote, but I think… the terminology maybe is a bit off.” They actually changed the role and made it, I think, quite a drastic improvement. I look at it now and I think it’s groundbreaking representation for ABC.

What was originally on the page that you wanted to improve? Was Jerrie written as nonbinary or was it unclear?

It wasn’t clear. Jerrie changed multiple times. There was a draft where Jerrie says she identifies as a girl, but also identifies as nonbinary. Even though the words on the page have changed, today, I say Jerrie identifies as nonbinary transfeminine, which is also how I identify. But at the time I auditioned, the character used she/her pronouns. The character was only referred to as she/her, but the character breakdown was just not correct. They made it seem like Jerrie was a cis-gay man who performed in drag, who worked at the truck stop as a sex worker in drag. I was like, “This just doesn’t feel right. This does not feel 2020.” Their willingness to adapt the story to something that I think makes a bit more sense to me as a queer person in 2020 is important. 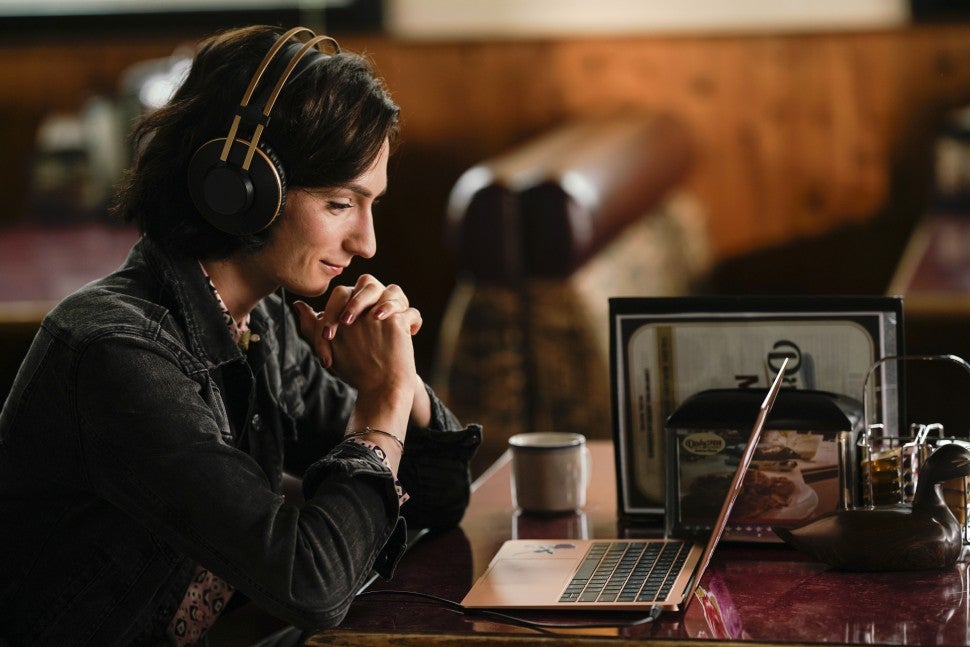 What are you proudest of in terms of your contribution in those conversations that you had with the writers and the producers, that you’re like, “Wow, I did that. I’m glad they listened and incorporated that”?

That’s a good question. At least the time of me booking this, I’m a no-name actor. I don’t have a huge weight behind me. All I have to offer is my lived experience. When I see something on the page that just doesn’t feel right or may feel the wrong direction for the story, I’ve spoken up a few times. They’ve been very receptive to it. Some things didn’t change, but they were open to hearing me and actually having a dialogue about some really important issues, some important topics. I think that’s what’s most important. From what I know of this project, I think I am really one of the only queer people involved. I’ve thought a lot about how I, as a queer person, embody space and how Jerrie, my character, equally embodied space — being very lonely in Montana, being one of the only queer people in her life. My experience on the show was a little similar. Every room I walk into becomes a queer space because I’m occupying it. I think that this show and the producers have given me the space and the opportunity to take up that space, even in just the conversations.

That’s unfortunately still rare. Sometimes those conversations are not had, which is equally as important.

I will say though, at the end of the day, I am still playing a trans sex worker on television. I think the difference is I’m not playing “she-male hooker No. 5,” a dead body on Law and Order. I’m a leading character. You really see [Jerrie’s] hopes and dreams as a musician. Later in the series, you’ll see quite a bit into my character’s past and her heartbreak and who she is as a person and where she comes from. It’s dealt with in such an empathetic and powerful way that not only empowers my character, but empowers me as an actor. That’s why this is groundbreaking representation. I’m not playing a sex worker who has no lines, I’m a leading character on ABC. I think that’s really damn powerful. Honestly, what I’m most proud of, I’m excited for the little queer kids at home to look up and be excited to see me on TV and hopefully see a little bit of themselves in Jerrie. I’m excited for their parents to watch and say, “I hope I do right by my kids.”

That was a question I had too. Would we get to see how and what happened that led Jerrie to this point?

Episode three, you learn quite a bit into how Jerrie got to where she is.

In Tuesday’s episode, you have a very vulnerable moment where Jerrie takes a shower in front of Ronald and reveals her true self to him in her rawest form. It was incredibly powerful to watch. What does that scene mean to you? Do you feel empowered by it? (Watch the ET’s exclusive clip of the scene above.)

Thank you. Thank you for saying that. I struggled with that scene on paper. It actually kept me up at night because I think on the surface, if done incorrectly, that scene could have come off exploitative. That was my biggest fear because there is something about having a trans person reveal themselves in a very violent and graphic way that just really made my gut churn. But the producers really stood by me and were there to protect me. Jerrie is the one in control here. She’s not forced to reveal herself. She chooses to. It’s an act of resistance. It’s an act of power. Jerrie is the one who holds the cards in that scene. And really, in her relationship with Ronald, Jerrie is the one… even though Ronald is the one with the taser and the chains, Jerrie has this otherworldly control over Ronald that is evident from the first scene you see with them. For me, that’s a dangerous moment for Jerrie in the shower. Jerrie knows that could be life or death. I mean, the whole situation is life or death. But in real life, trans and gender nonconforming and queer people are subject to so much violence just for existing. Jerrie’s no stranger to that, especially as a trans sex worker in Montana, she has been through hell and back. Nothing Ronald could put her through is worse than what she already went through. That’s how I justified that scene for me as an actor. 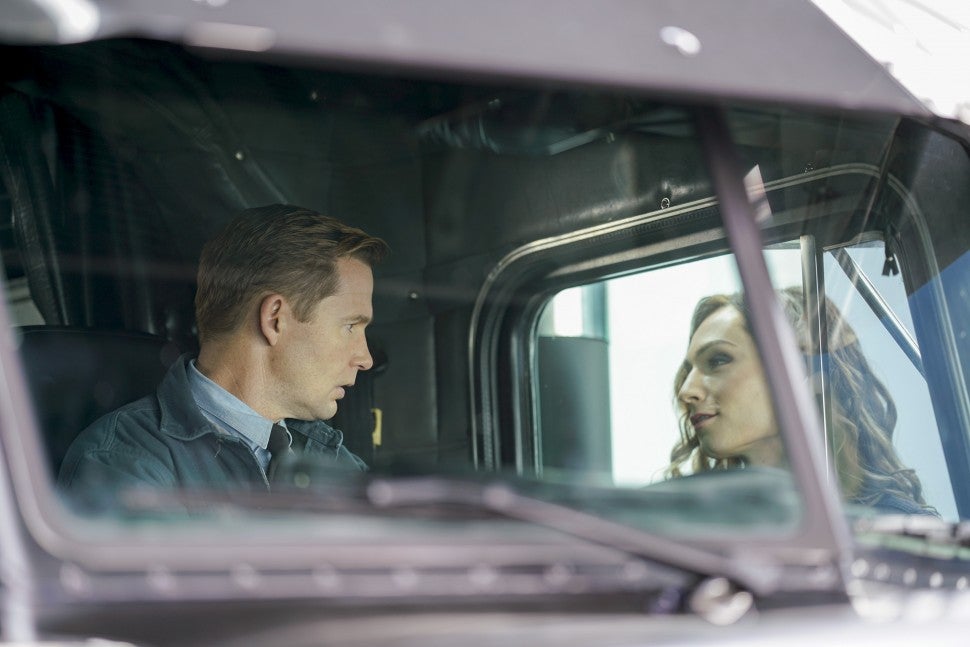 There’s a common trope where we see transgender or gender nonconforming people in situations where they’re abused or mistreated by cisgender people. Was a little bit of concern on your end about getting into this scene and how it might be interpreted by viewers? What are you hoping people get out of it?

My biggest fear with that scene in particular and moving on is I fear people viewing Jerrie as removing that wig as her de-transing, that her identity relies on her presentation, because that’s not true. What I hope for is that people who maybe haven’t gotten to experience a person like me, or like Jerrie, I hope they viewed Jerrie’s really difficult moment in that scene and empathize with her. I hope that leads to some profound respect for people like Jerrie. It pains me to think that people could watch that and not feel remorse about how they may have treated queer people in their lives. I hope people watch that and really care for a poor trans sex worker on their TV. I hope people care.

The scene really sticks with you and it’s not something you see on TV a lot.

Especially not on broadcast. There are plenty of other trans actors playing trans roles on TV right now. I think what’s so exciting about Jerrie Kennedy on Big Sky is it’s a trans character on a very straight, cis show, on a very straight, cis platform. It’s not a very queer space. Seeing this character take up a significant amount of time and space on a show like this is, that’s next level.

What are you excited for viewers to see this season?

Oh my God, a lot. A lot, honestly. Every episode is really different. We have such a beautifully diverse slate of directors, a lot of women and there are little bits of each episode where I’m like, “I can’t wait to see what people say about that.” But honestly, I think right now what I’m most looking forward to is a heartfelt moment that Jerrie has with another character. Talking about empathy for Jerrie, there’s a scene in particular in an upcoming episode where a lot of parents of queer children may want to hug their kids a little tighter. I’m excited for that.

I have to ask about your reaction to the end of the first episode. I’m still stunned by Legarski’s cold-blooded kill. It was the moment it became clear the show wasn’t playing around.

Are they ever going to find Cody’s body?

You’ll just have to keep watching to find out. Just when you think it can’t get more wild, it does.

To stay up to date on breaking TV news, sign up for ET’s daily newsletter.