Each week, Benjamin Law asks public figures to discuss the subjects we're told to keep private by getting them to roll a die. The numbers they land on are the topics they're given. This week he talks to Richard Roxburgh. The 57-year-old actor, producer, director and author has won two AACTAs, two Logies and two Helpmann awards, and is best known for his role as lawyer Cleaver Greene in ABC TV's Rake. 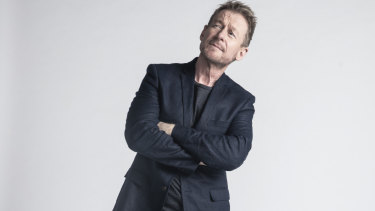 ‘Richness is a relative construct. I feel comfortable. And I suppose I’m comfortable with the fact I’ve worked my arse off and experienced times of deprivation.’Credit:Louie Douvis

What did your parents say?

I was a complete mystery to them, because there were no other kids in my family – or indeed, at the school, or outlying districts, really [laughs] – who seemed to have the same area of interest I had. Understandably, my parents wanted me to have a proper tertiary education [he has an economics degree], so there was a push to do that. But my mother especially understood that I was a square shape trying to fit into a round world. So when I started showing I could do something with it, that I was passionate about it, they were cool.

Would you describe yourself as rich now?

No. What I feel is fortunate, because I can make a living out of the thing that is singular for me in this life, the thing I get a complete buzz from: creating stories.

Some might say, "But Richard, I read the real-estate pages, I saw what your house sold for." You're rich.

They're probably right, in that sense. But richness is a relative construct. I feel comfortable. And I suppose I'm comfortable with the fact I've worked my arse off and experienced times – when I was going through drama school [laughs] – of deprivation.

What do you spend a lot of money on?

We're happy to spend a lot of money on travel. It's one of the great enriching experiences in this life. My wife [actor, singer, cook and author Silvia Colloca] is Italian and I have an Italian passport. Putting our three kids there, speaking that language and steeping them in that side of themselves, is so important.

Your father, John, spent about three years in a Japanese prisoner-of-war camp in Changi, Singapore. Did he talk about that experience with you?

He was part of a generation of guys who came back from the war whose guiding principle was to shut up and move on; where if you don't look at it, it doesn't exist – which of course is a nonsense. All of them, every single one of them, had post-trauma. I'm sure my dad did, too. He was 19. They were kids, dealing with these incongruously awful images on a daily basis.

Your mother, Marie, passed away before your father. When did you lose her?

My mum had multiple myeloma, a really terrible cancer. She died in 1990 aged 68, and that was a hideous time. I was incredibly close to her, and I was 28 years old. I sort of took a year off and went insane.

That is a young age to lose your mother.

Yeah. I just went crazy and travelled the world. Luckily I'd just worked on a job where I earned a bit of money, so I was able to keep travelling for a year.

Did losing them make you think differently about life and death?

My agent died as well around that time, young, in the midst of the AIDS plague. You suspect death is around every corner, lurking. I didn't like the way that made me feel, so I was glad to move beyond that phase.

How did you do that?

For me, it was really just the passage of time, and finding things in this life that would take away the shadow of it, and replace it with something that was much more important. And that was love. And family. Then that, as every parent knows, brings all of these attendant horrible thoughts that never leave you. [Laughs grimly] "What if?" Walking to school! Riding a bike! Swimming! It's always there.

Quite old. [Laughs] I have a two-year-old daughter now, so I really gotta stick around.

Did you grow up with church and faith?

No. We went to Sunday school for a little bit, but my mother and father weren't religious. There are so many things about religion that I feel so strongly the absence of, though. In a sense we're lesser because we don't have it; there's something in the way it unites communities. There's something about the primary principle it gives people; a kind of rulebook.

Religion also gives people a sense of the sublime. Where do you get that from?

My kids. [Pauses] They're obviously not always sublime. They can be absolute little bastards. But my two-year-old girl is just really funny. She's a little clown and loves making everyone laugh. That's sublime.

What is your version of hell?

The threat of terrible things in this life that are around the corner. Then again, there's also something about the way people deal with hell that's amazing; the way human beings are called upon to beat a path through the pain that is absolutely extraordinary and inspiring.

And your version of heaven?

Family. It's the love at the centre of your life, and the privilege of having found it. And really good food.

Richard Roxburgh stars alongside Asher Keddie in The Hunting, which premieres on SBS on August 1.

To read more from Good Weekend magazine, visit our page at The Sydney Morning Herald, The Age and Brisbane Times.