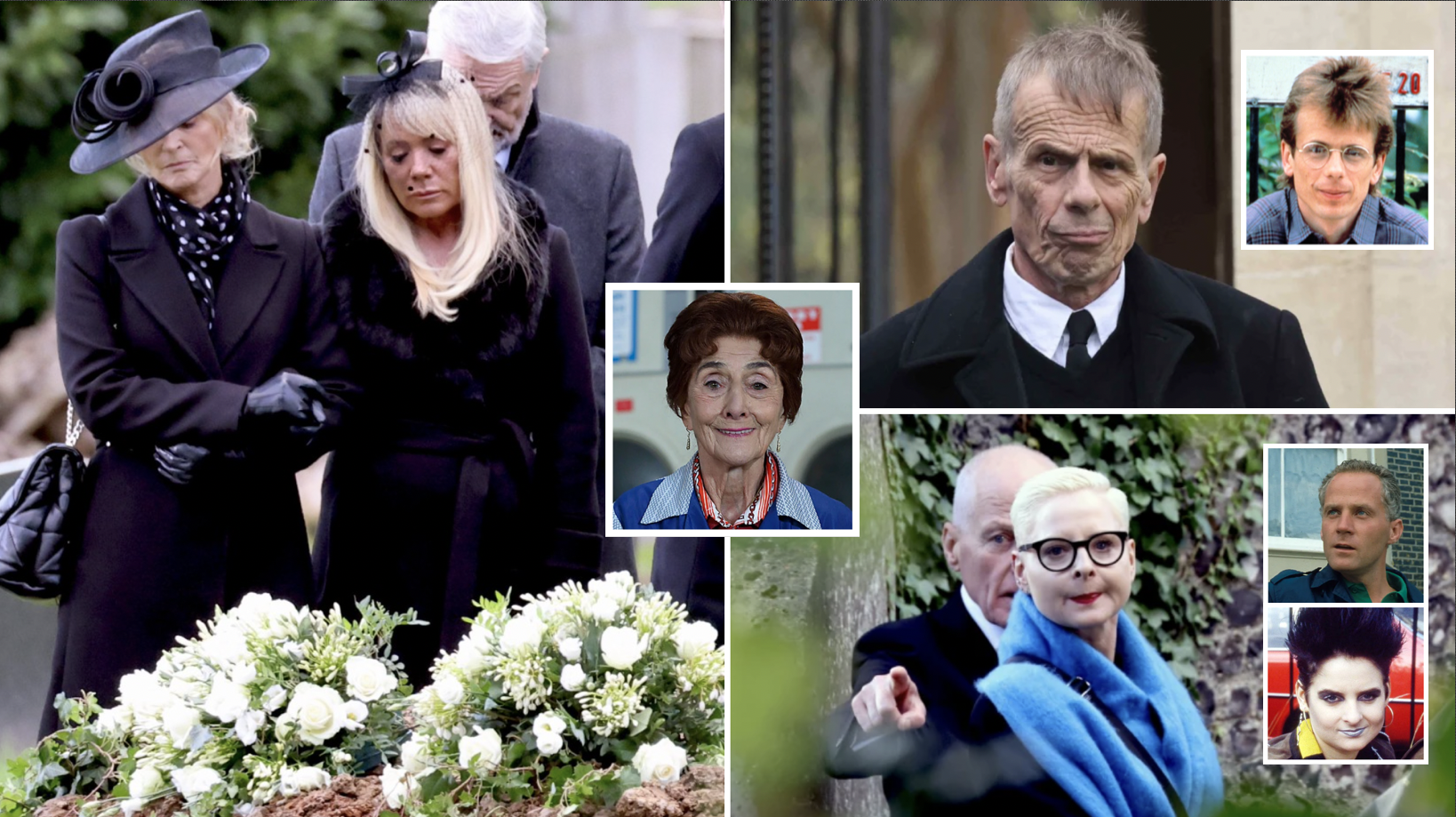 EastEnders icons past and present have been pictured together for the upcoming Dot Cotton tribute episode.

Filming is underway for the special outing of the long-running serial drama, which will pay tribute to the legendary character in the wake of June Brown’s death at the age of 95.

Veteran soap stars, including Letitia Dean and Gillian Taylforth – who play Sharon Watts and Kathy Beale respectively – were pictured on-location shooting the emotional scenes, as Dot is laid to rest.

James Bye (Martin Fowler), Diane Parish (Denise Fox), Scott Maslen (Jack Branning) and Rudolph Walker (Patrick Truman) were also present during the shoot, as their respective characters – who were all close to Dot – pay their respects.

The current cast members were also joined by a string of former EastEnders stars, whose characters stage a comeback to honour their beloved Dot.

Colin, as long-time fans of the BBC One soap will recall, forged quite a bond with Dot during his time in the show, and the two became the best of friends.

The character departed in 1989, but he staged a historic comeback in 2016, when he showed up in the Square to invite Dot to his wedding, challenging her religious views on same-sex marriage.

Lofty and Mary, meanwhile, made a return to Walford in 2019, when they reunited with Dot after 30 years to say goodbye to Dr Legg (Leonard Fenton).

Jan Graveson will also reprise her role as Disa O’Brien, a runaway teen who crossed paths with Diane Butcher (Sophie Lawrence) when she was living on the streets in 1990.

The character initially appeared in a two part flashback episode, but she arrived in Walford later that year, upon giving birth to her daughter Jasmine – who she had previously named Billie.

A number of the Square’s finest rallied round Disa to offer support, with Dot at the very top of that list.

Dot, in fact, helped Disa trap her abuser – stepfather Ken – and reconnect with her estranged mother, before she ultimately left in 1991 to start a new life up North.

Disa hasn’t been seen since, but let’s just say that her return will stir up difficult memories for one Walford resident in particular.

Jacqueline Jossa will also reprise her role as Lauren Branning for Dot’s special farewell. Lauren has been in New Zealand since 2018, where she started a new life with her son Louie.

But now she’s back, and she will soon find out that much has changed in Albert Square – and she’s very keen to get to know one handsome resident.

‘Coming back to EastEnders for Dot’s funeral was a no-brainer, and it was a real honour to be invited back,’ said Jacqueline. ‘I had a lot of fun but, of course, it was bittersweet.

EastEnders Executive Producer Chris Clenshaw confirmed to Metro.co.uk earlier this year that the show’s team were working to pay their respects to both Dot and star June Brown.

‘It’s an honour to invite so many of Walford’s beloved characters back to pay tribute to Dot,’ he said more recently, discussing the returning characters.

‘Over the years, Dot profoundly impacted the lives of many young people struggling with life’s biggest challenges.

‘Her warmth, heart and compassion changed lives – so we wanted to reunite some of the people she helped the most.

‘I’m thrilled these talented and generous actors wanted to share this special experience with us so we can give Dot a fitting send-off.’

EastEnders airs Mondays to Thursday at 7:30pm on BBC One.