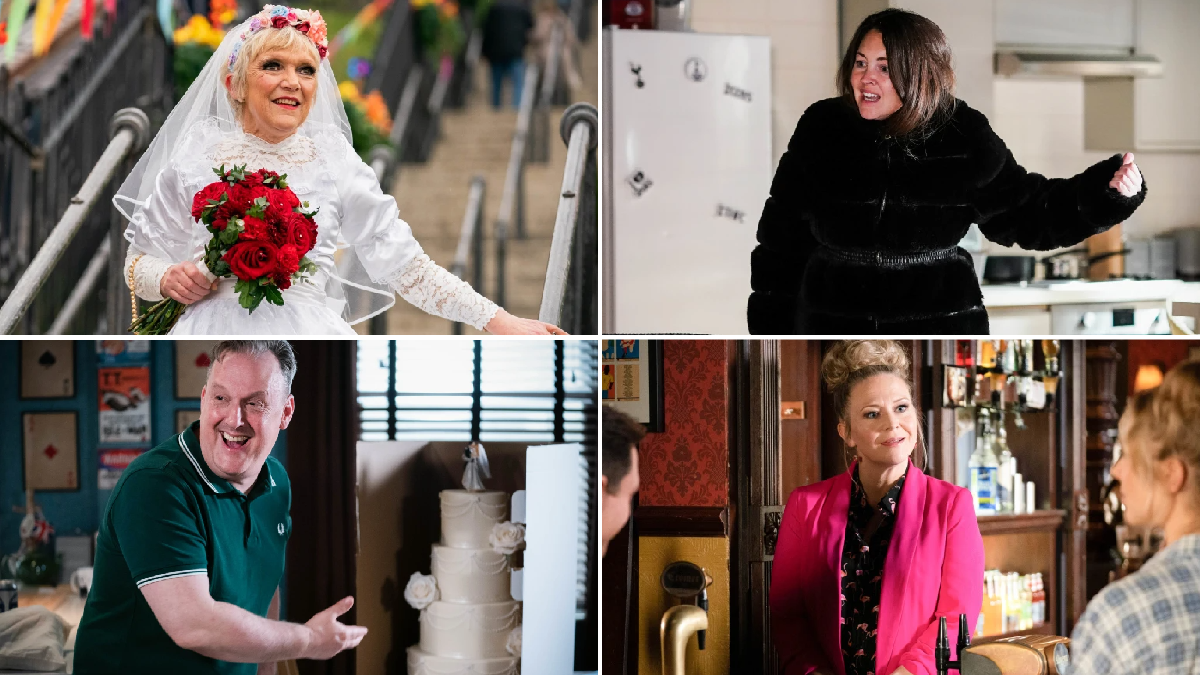 The understandable concern around Jean Slater (Gillian Wright) is set to intensify as she flees to Southend in her wedding dress – before disaster then strikes in EastEnders.

But are loved ones Stacey (Lacey Turner) and Harvey (Ross Boatman) too late to avert tragedy?

Elsewhere, the claws are out again as Sam Mitchell (Kim Medcalf) fights to get to the top of the Mitchell family business – but Kat (Jessie Wallace) is having none of it!

Kat is shocked when a smoke bomb is thrown into her house, but she knows who is responsible. Kat’s day takes another unsettling turn when she receives a strange package, but it turns out to be a false alarm.

When Sam later arrives at the house and threatens to move in, Kat kicks her out and insists that she’s head of the family.

Harvey asks Jean to cancel all of the expensive arrangements she has made for their wedding. He insists that he wants to focus on finding a flat in Southend first.

Linda returns to serving customers at The Vic following a pep talk from Stacey.

Whitney finds a letter confirming that Gray hasn’t paid the mortgage for months, so Chelsea may lose the house.

Stuart starts taking the painkillers following an update on his condition.

Harvey receives a phone call, letting him know that Aaron is in hospital after being seriously injured in prison. Stacey sees how fragile Harvey is and supports him at the hospital.

Stacey realises that Jean has been a distraction for Harvey recently. She tries to get him to see this and begs him not to marry Jean.

Sam gets an idea from Ricky when she needs a place to stay. Later, Ricky scares Jack by threatening to move away with Sam.

Vi notices that Stuart is making excuses not to hold Roland. At the same time, Ben worries when he finds out that Steve has woken up.

Kim and Whitney encourage Chelsea to accept a job at the club in order to solve her financial worries.

Linda is back behind the bar of the pub, but will she be able to resist alcohol herself when Mick, Janine and Ollie return from holiday together?

Janine suggests to Mick that Linda might be a safeguarding issue for Ollie. He decides to speak to Linda about whether it’s a good idea for her to be working at The Vic. Janine also tries to rattle Linda by opening a bottle of champagne.

Mick feels uncomfortable when Billy tells him that Janine has been talking about their private life.

Rainie asks Bernie to look after Roland as Stuart keeps avoiding the baby.

Harvey tells Jean that Aaron’s life is hanging in the balance in hospital, but she doesn’t seem interested. Harvey is surprised by her attitude and he’s also taken aback when he sees Jean’s over-the-top wedding dress.

Harvey finally starts to accept that Jean might be unwell, so he suggests they should slow things down as Aaron needs to be his focus.

Jean responds badly and moves back in with the Slaters, but she refuses to give up on her happily-ever-after.

Billy tells Stacey that he saw Jean in her wedding dress and she claimed she was getting married today. Stacey and Martin soon realise that Jean has travelled to Southend.

When Stacey and Martin arrive in Southend, they spot Jean walking towards the sea. Stacey runs after her mum and encourages her to come away from the water.

Jean starts to realise that she’s unwell, just as Stacey reaches her.

Back on the Square, Harvey is shocked as he finally sees that Jean has been unwell the whole time. He’s left to question whether Jean ever really loved him.

Kat is surprised by how Lily reacts when Callum brings her home for shoplifting.