REDHEADS are often known for their fiery personalities as well as their flame-coloured hair – and while it's a trait that can get a lot of flack, many now regard the colour as extremely hot.

Which is why, to pay homage to the hair colour that only two percent of the population are said to naturally have, today we celebrate the annual 'Kiss A Ginger Day'. 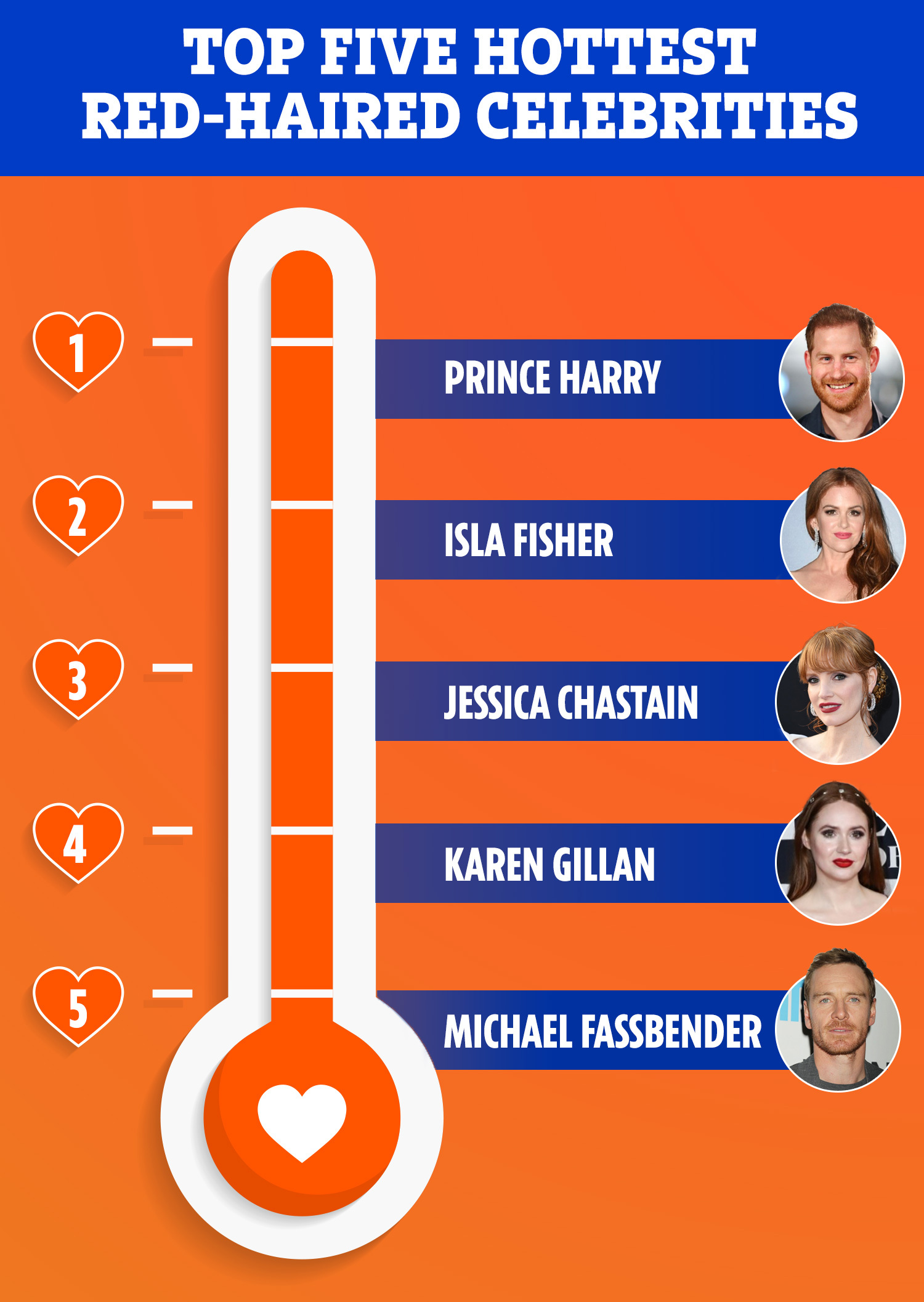 And while the colour may be extremely rare, there's no shortage of attractive red-headed celebs, it would seem.

To mark the annual celebration, here's a look at the top ten hottest redheads you'd most like to kiss, as voted for by Brits in an OnBuy.com survey… 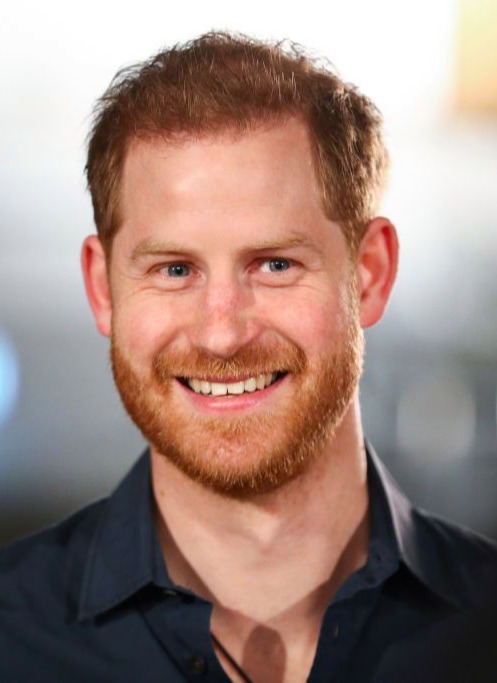 Coming out on top, Prince Harry, 36, is the ginger icon people would most like to kiss – although wife Meghan may have something to say about that.

A whopping 83 percent of respondents voted the prince as the most attractive redhead, a trait he's said to have inherited from his grandfather, Prince Philip.

The prince regularly jokes about his hair colour, and even teamed up with fellow redhead Ed Sheeran to produce a hilarious spoof video for World Mental Health Day, which showed Ed mistakenly believing they're meeting to 'raise awareness' about the difficulties ginger people face. 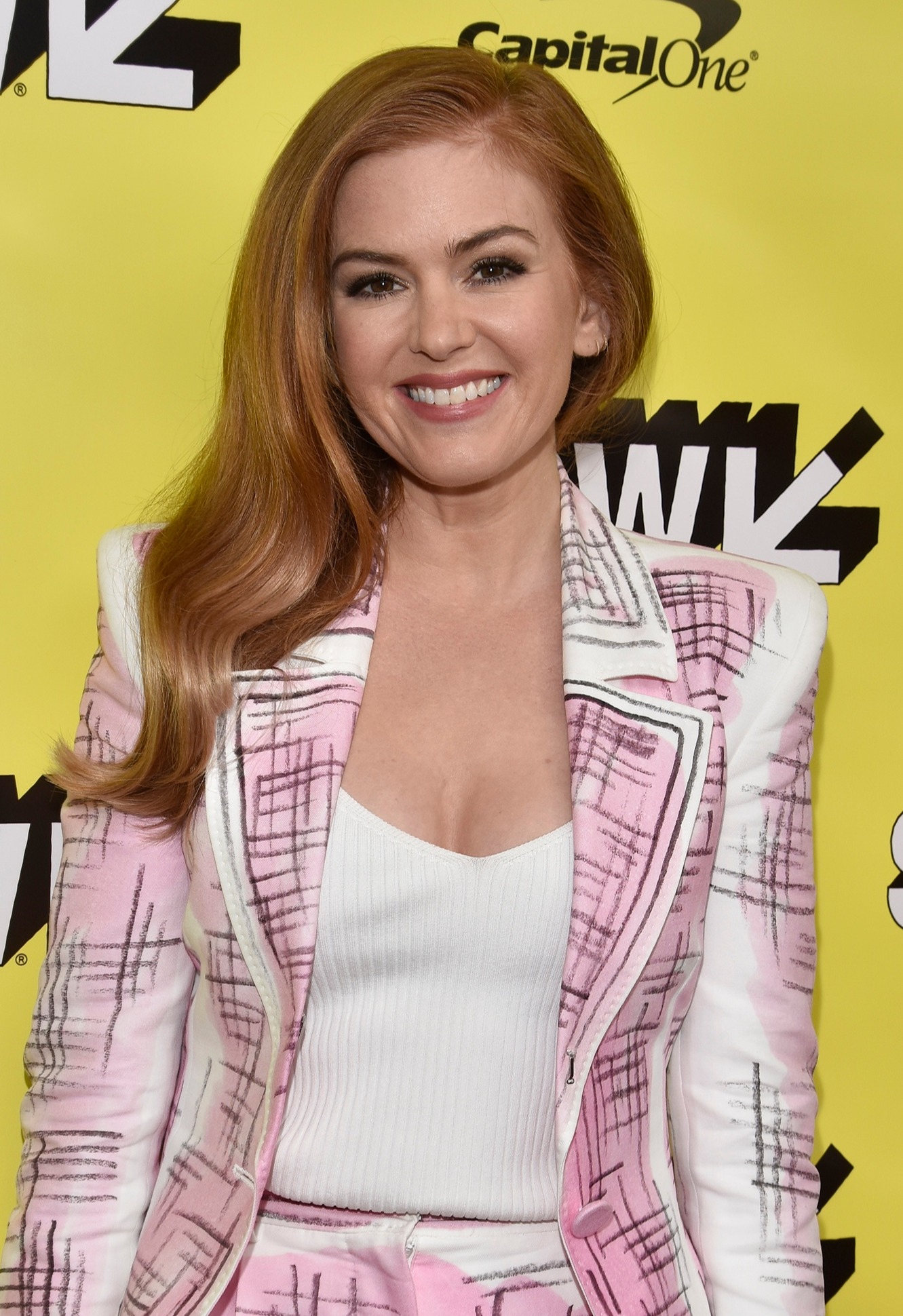 In second place is Wedding Crashers' Isla Fisher, with 81 per cent of respondents voting for her as one of the most attractive redheads.

But while her beauty is undeniable, the 44-year-old actress admits she didn't always love her luscious locks.

Speaking to Men's Journal, she revealed: "I got teased growing up in Australia and then in London, where people label you a ginger. It can make you feel like an outsider. 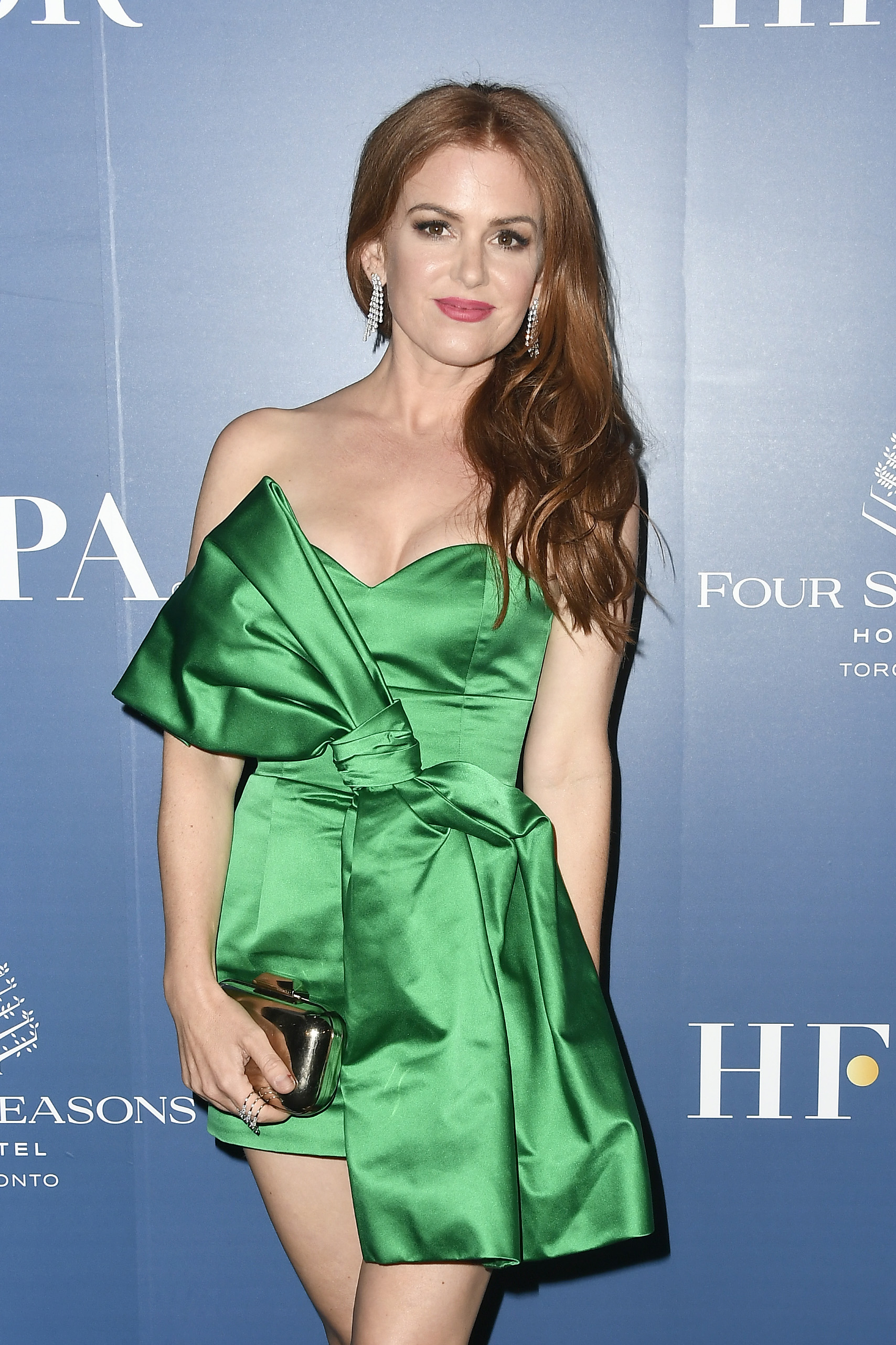 "I was the only redhead in my class, with people calling me carrot top or asking whether the carpet matches the drapes.

"Now I embrace it because it makes me unique." 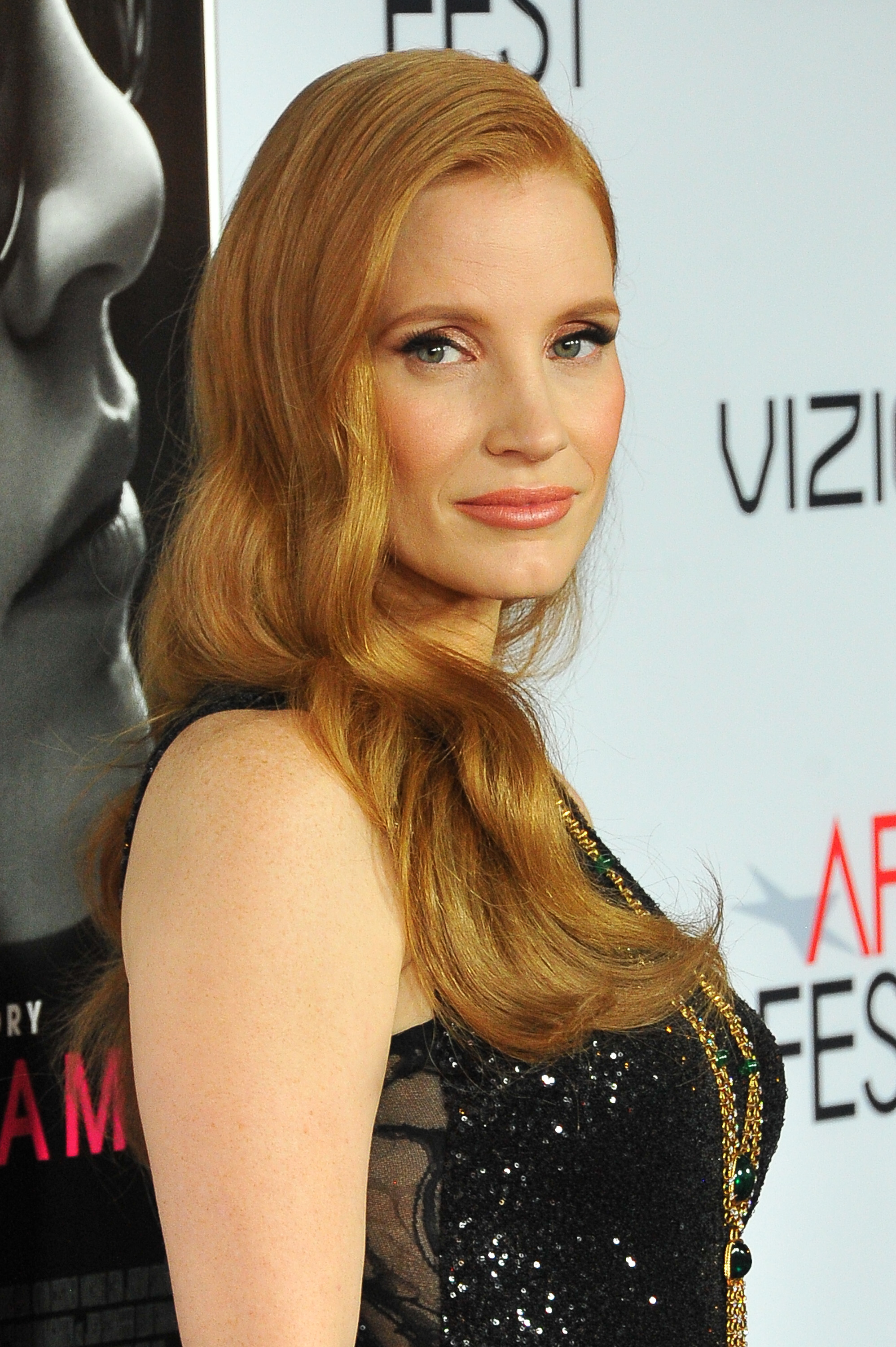 American actress Jessica Chastain, 43, is proud to be a redhead – and now only dyes her hair if it's essential for a film role.

The Golden-Globe winning star told Refinery29: "Whatever you are ridiculed about that makes you different is what you'll celebrate in the future.

"If I wanted to dye my hair, I could, but I realised that's who I am, and my differences (make me) special."

4. Who? Doctor Who star Karen Gillan 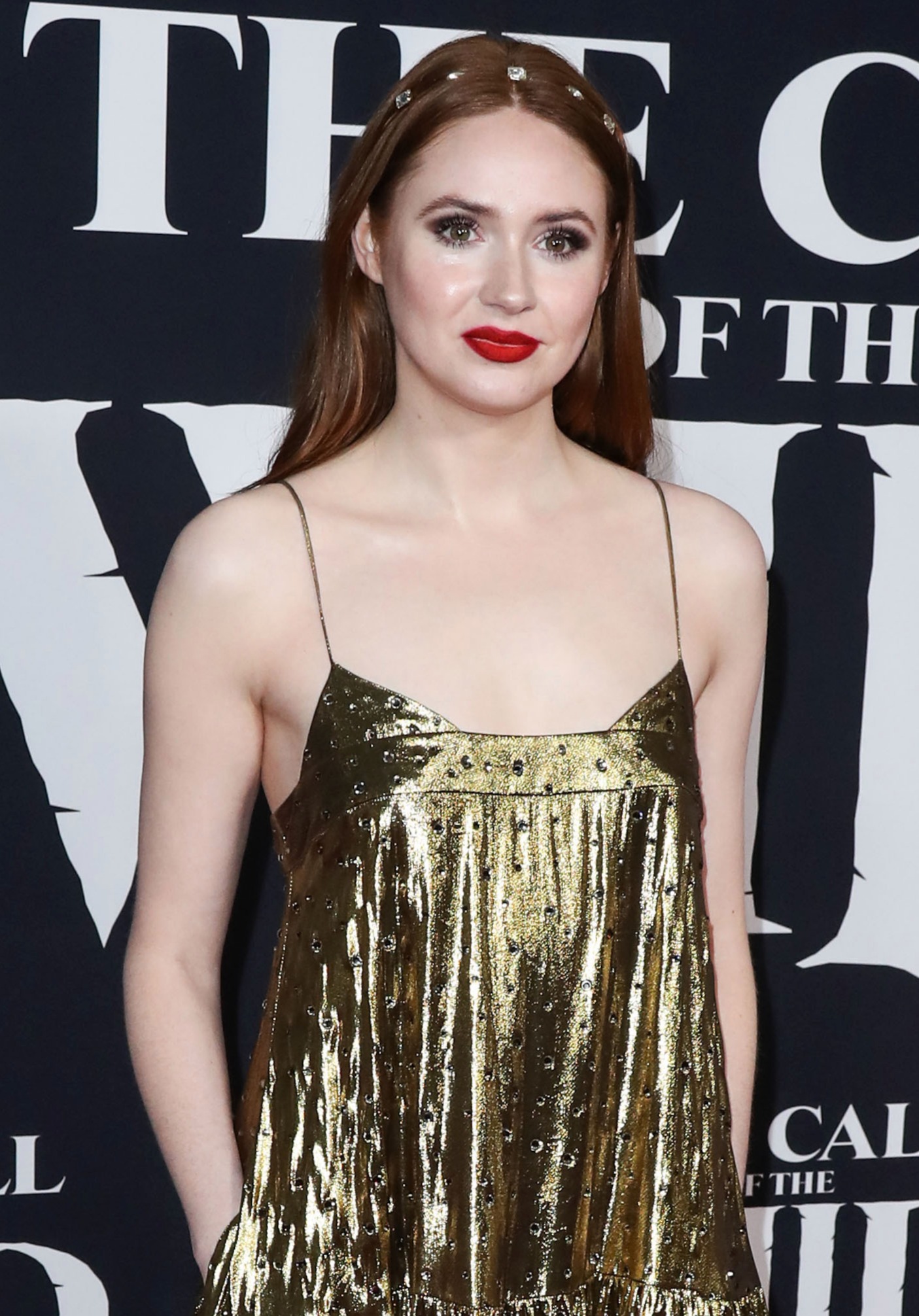 Born in Inverness, Scotland, flame-haired Karen can attribute her gorgeous barnet to her Celtic roots.

The Avengers actress has also admitted when she has kids, she hopes they inherit her hair colour – and her love of horror movies.

When asked if she wanted to have children in a podcast interview, she said: “Of course, I need some little ginger children running around." 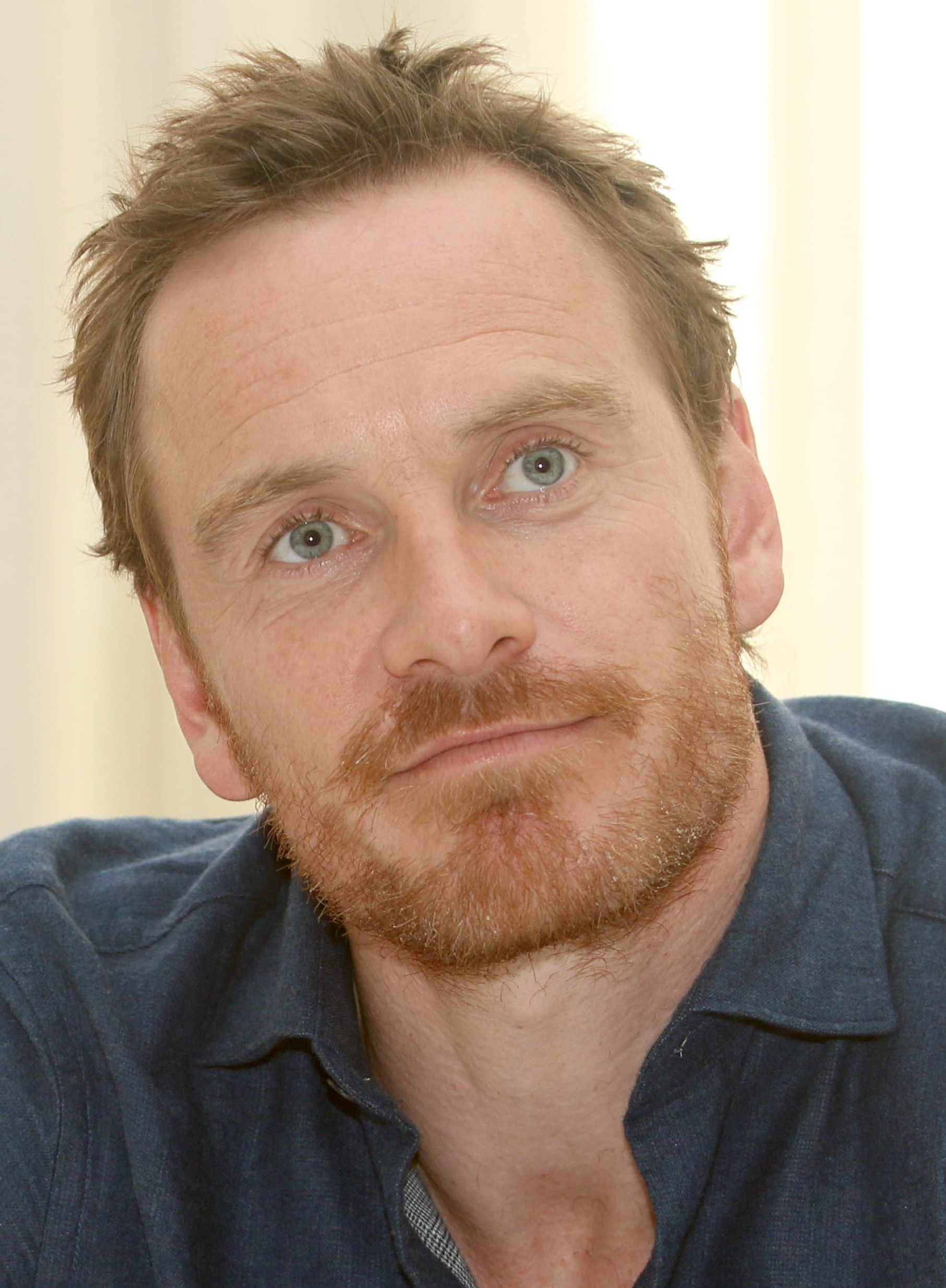 Not only does Irish star Michael Fassbender boast a fabulous, fiery head of hair, he also has a copper beard to match.

Around 74 per cent of people taking part in the survey found the 43-year-old actor attractive, landing him in fifth place.

However despite the accolade and his pride regarding his natural hair colour, Michael often dyes it for film roles.

Speaking to Pop Sugar, he jokingly said: "I'm a ginger. There's not much more fun you can get [than] as a ginger- that's why there's so much resentment to the ginger community." 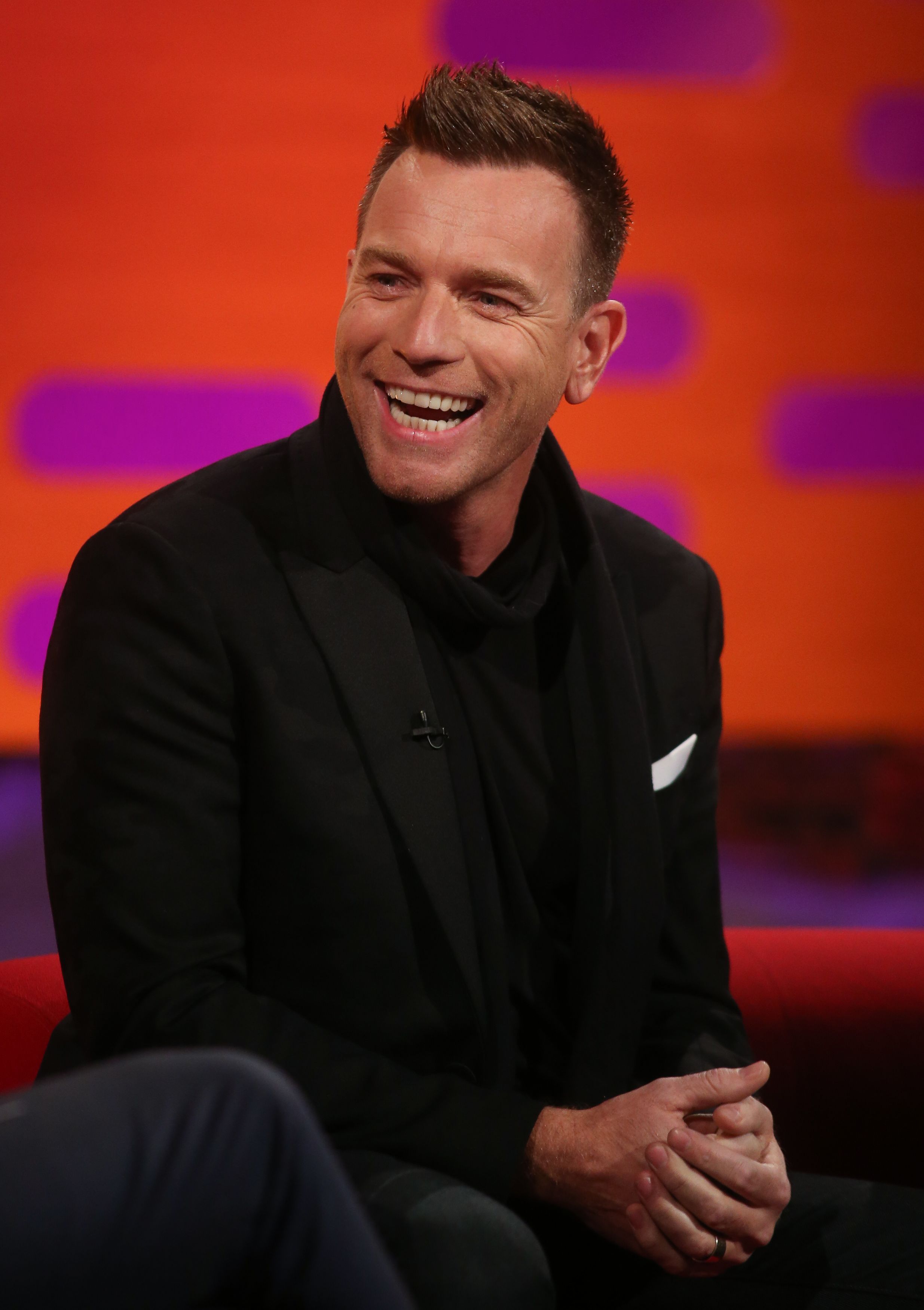 You'd be forgiven for being a little surprised to see Scottish actor Ewan McGregor in the top ten, because he frequently dyes his hair darker for roles.

However, the Moulin Rouge actor, 49, is naturally a redhead, and while his hue may be subtle in comparison to more 'loud and proud' ginger stars, he has still earned himself a spot in the top ten.

Desperate to be a Weasley 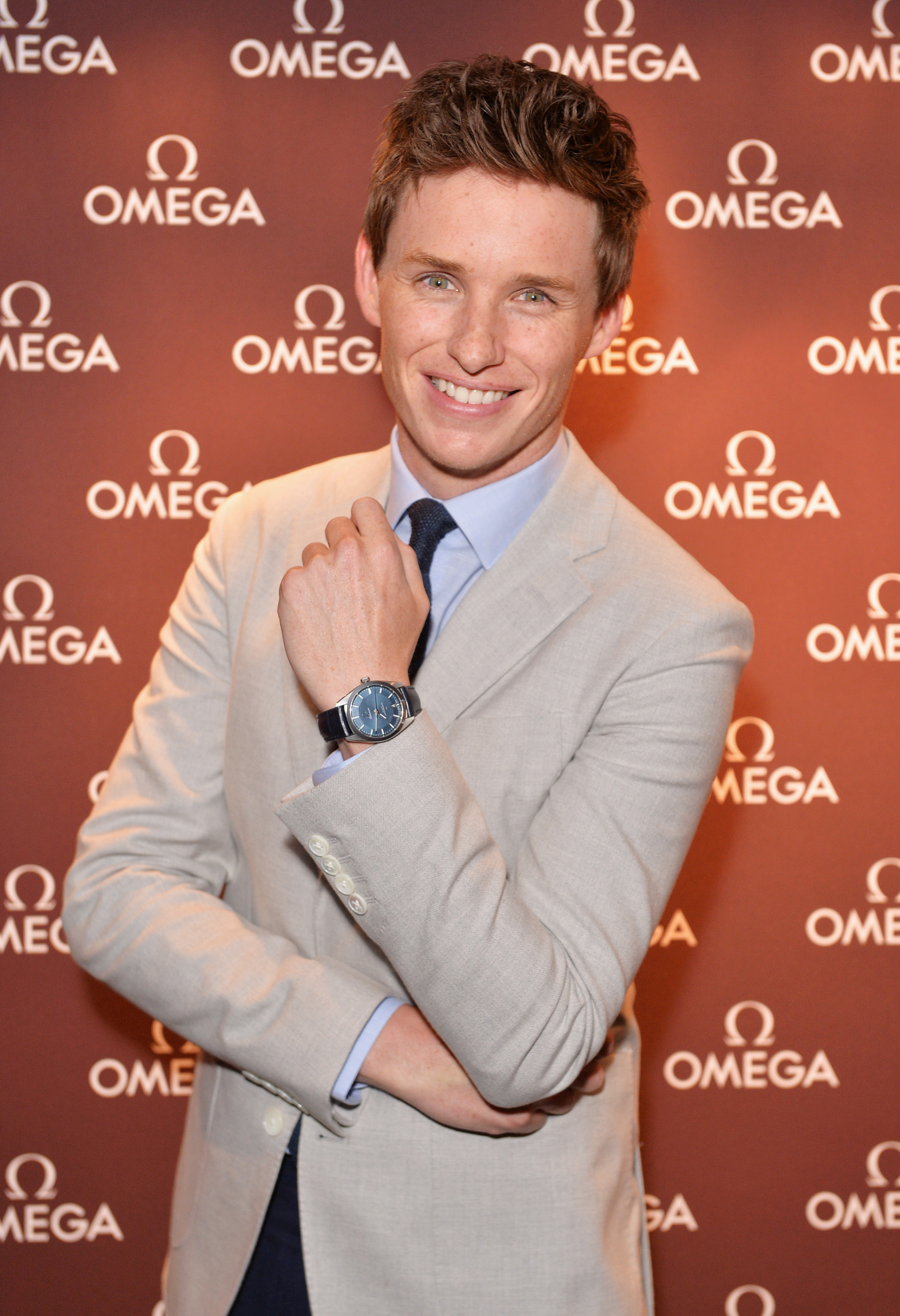 Eddie Redmayne's chiselled cheek bones and strawberry blonde hair have won the Theory Of Everything actor a whole host of admirers.

However, there is one thing his hair didn't win him that he's a tad bitter about – a role as a member of the all-ginger Weasley family, in Harry Potter.

Speaking to ITV's Lorraine, the 39-year-old Oscar winner said: "For years I was always like, in the Harry Potter films, there was a whole ginger family, and I never got an audition. And I was like, come on, it's outrageous!

"Every actor in England was in the Harry Potter films, but I never got the call."

'If I dyed my hair my mum would disown me' 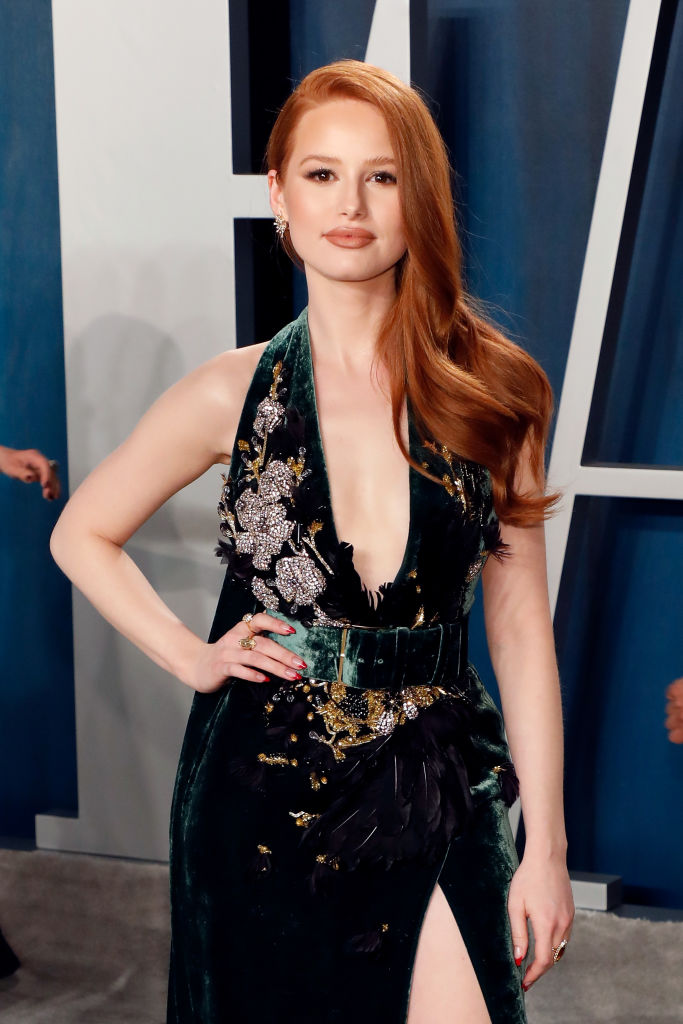 Riverdale actress Madelaine, 26, has beautiful hair that attracts so much attention, fans even question if it's natural.

Speaking to Flare, Madelaine was quick to clear this up, saying: "My hair is very much real."

"If I dyed my hair, my mother would actually disown me," she added. 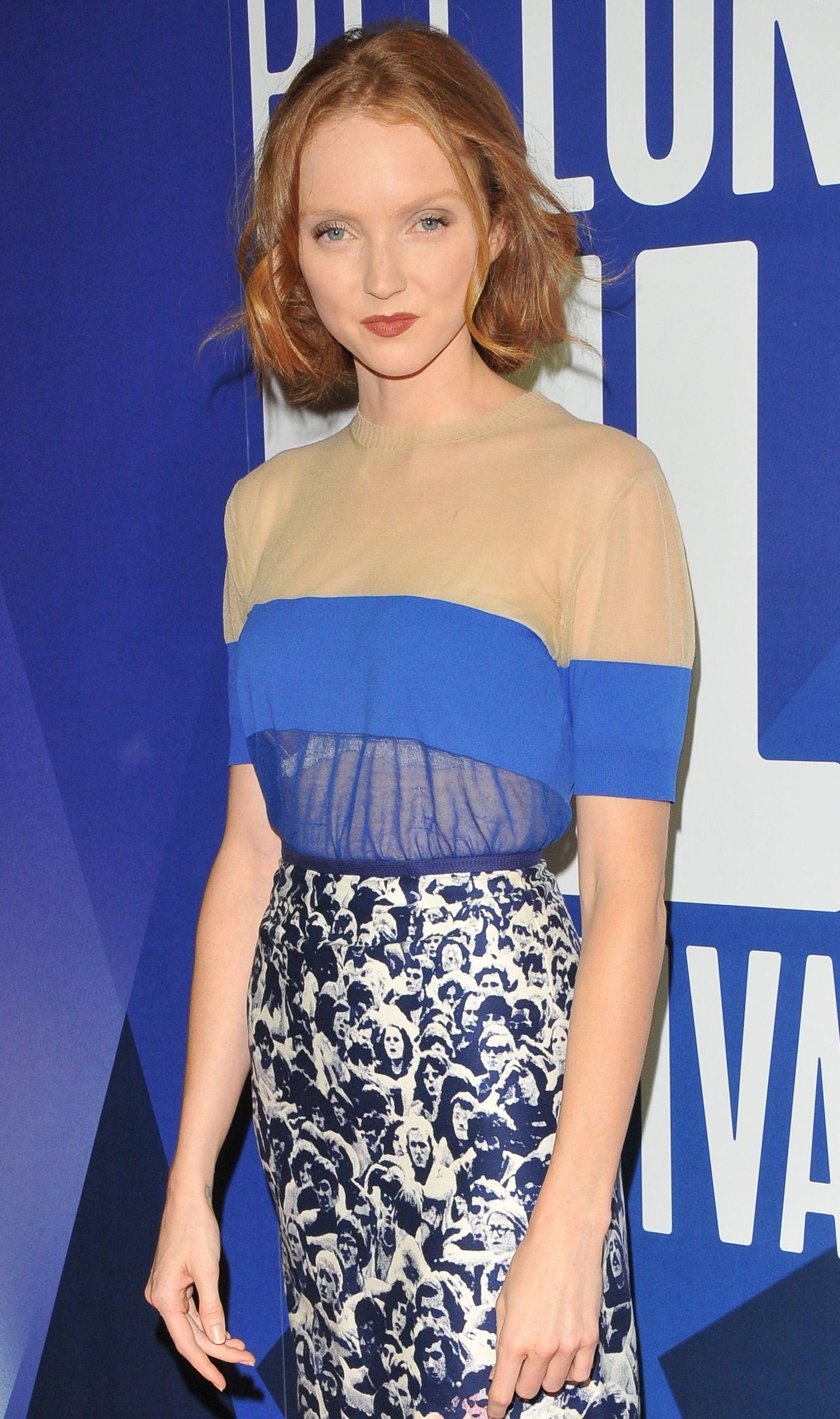 Her unique beauty and striking appearance have made Lily Cole, 33, one of the most successful British supermodels of recent times – but bizarrely even models aren't immune to being picked on for their looks.

Speaking about her past experiences, Lily said in an interview: “What are the reasons that kids are bullied? It's because they're different.

“On a surface level it was mostly because I had red hair. And at that time in England – and I still think it exists as a problem – being ginger was a common kind of slur." 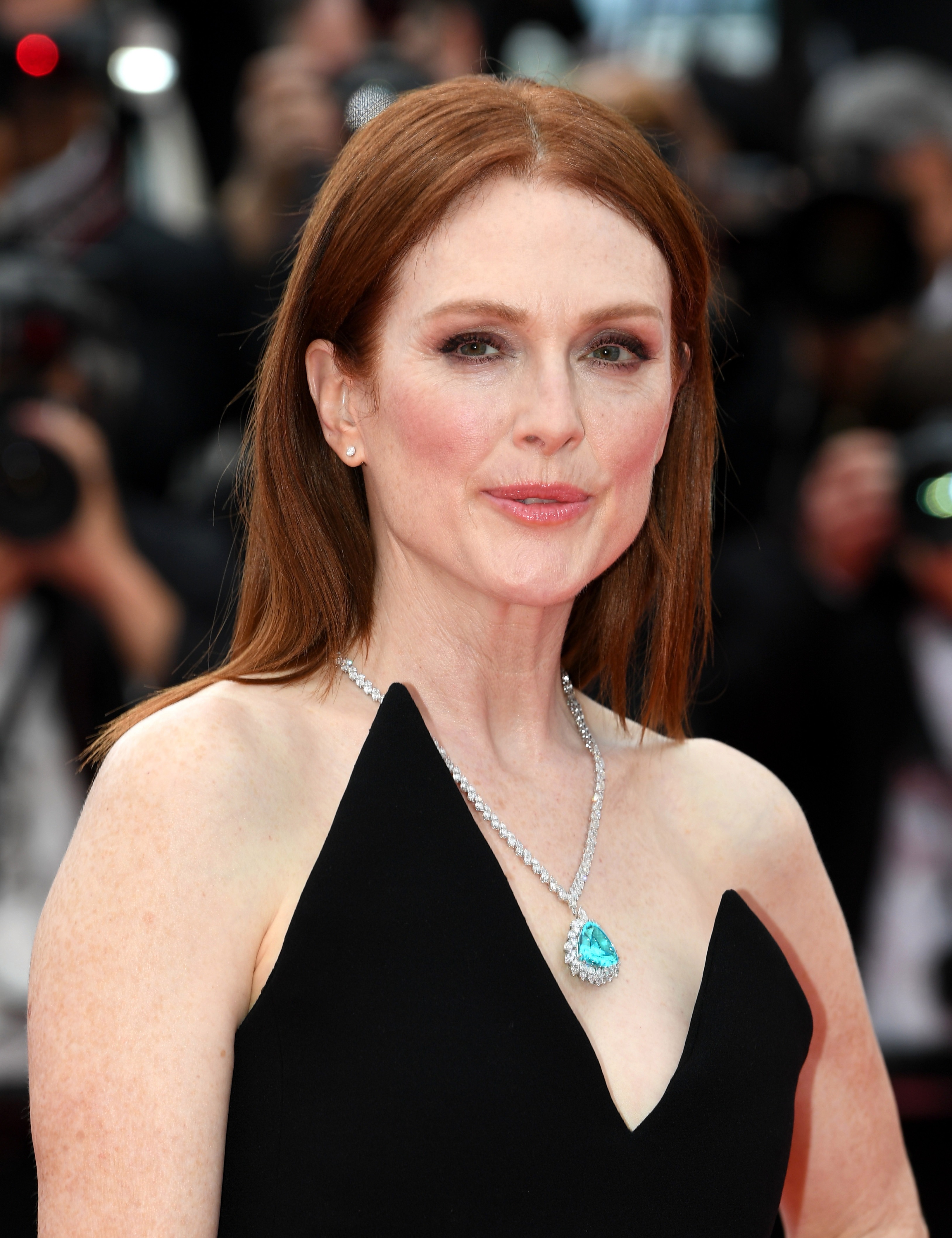 She was dubbed a 'ginger icon' by Late Show host Stephen Colbert, who said: "When you think redhead, you think of Julianne Moore: a beautiful, talented redhead," so it's little surprise Julianne Moore makes the top ten.

But she has a love – hate relationship with her red locks. Speaking about her hair, the 60-year-old actress said: "I have complicated feelings about it, about being a redhead in general.

"I think because people have expectations that your hair has something to do with your personality that you're feisty or you're sexy."

Whether you were lucky enough to kiss a redhead today or not, there's no denying the 'red hot' hair colour deserves to be celebrated.