Terry Gilliam spent 30 years chasing his passion project and finally completed “The Man Who Killed Don Quixote” last year. The seriocomic saga folded in on itself, as Gilliam seemed to be trapped in his own Quixotic delusion that his ambitious Spanish production would ever be completed. The first chapter of that struggle was documented in directors Keith Fulton and Louis Pepe’s 2002 “Lost in La Mancha,” which itself became an unfinished story as it captured the forlorn Gilliam through a series of frustrating creative and practical challenges — from ruined sets to injured actors — until the project collapsed.

“He Dreams of Giants” completes the narrative, finding Gilliam several decades older but no less committed to his ambitious saga, now starring Jonathan Pryce and Adam Driver in roles that once fell to Johnny Depp and Jean Rochefort. “Don Quixote” stumbled to the finish line at Cannes last year as its closing-night selection, and turned out to be a halfway decent collection of Gilliamesque whimsy. While not exactly worth the wait compared to Gilliam’s finest work, the movie did embody his beguiling aesthetic with a blend of comical high fantasy and soulful yearning.

That’s the focal point for Fulton and Pepe’s insightful second chapter, which evades the scandalous industrial hurdles facing the project — including a litigious producer and Amazon Studios’ decision not to release its own production — in favor of magnifying Gilliam’s hubristic determination. It’s hardly a definitive look at the “Quixote” saga; at the same time, it retains an intimacy with the artist at its center that positions it a cut above the typical behind-the-scenes bonus features.

In fact, “He Dreams of Giants” may work best if you haven’t seen the final movie, which trickled into a few hundred theaters earlier this year after its Cannes premiere. This documentary doesn’t even sample the finished product, and the filmmakers hardly delve into Gilliam’s meta narrative, which found Driver playing an advertising director overseeing a troubled Quixote production.

Instead, Fulton and Pepe — who appear briefly at the start of the movie, aging alongside their protagonist — fixate on Gilliam’s face: A brilliant early shot from “Lost in La Mancha” plays on one of the director’s iPhones, and as they pull it away to reveal modern-day Gilliam sitting against the same backdrop, the throughline is clear. He looks shriveled, wistful, and world-wearier to the bone, but no less compelled to finish his film. That’s not only the centerpiece of the documentary; it’s the fascinating raison d’etre, and a mystery with no clear answer.

Fulton and Pepe gained exclusive access to the set, capturing the suspense facing Gilliam and his crew as they finally make headway. “He Dreams of Giants” drills into Gilliam’s neurotic psyche, exploring the nature of his artistic drive while providing a crash course on the way he fights for his unusual visions across the decades. At long last, this bumpy real-life epic gets a happy ending. 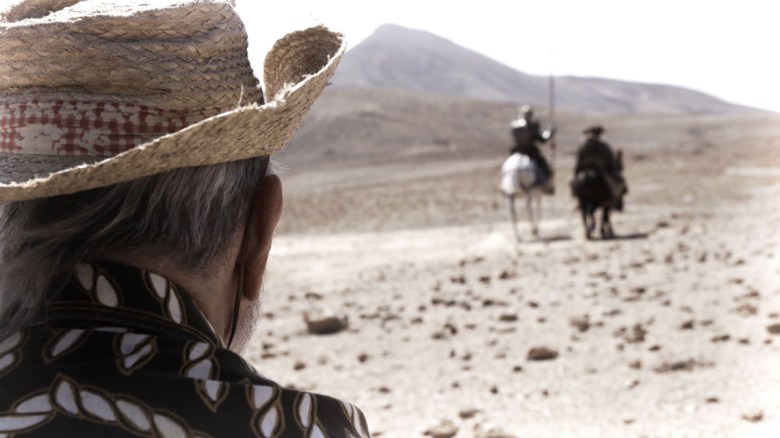 “He Dreams of Giants”

Decades after his first gained notice as the sole American member of Monty Python, Gilliam remains an entrancing onscreen presence. More than anything else, his distinctive profile (beard on one end, shaggy mullet on the other, wizened flesh in between) propels “He Dreams of Giants.” As his movie finally comes together, the documentarians linger on Gilliam’s shifting expressions, careening from giddiness over his performers to vulgar bursts of frustration as the production drags on.

These sequences, as well as welcome recaps of Gilliam’s notorious history of studio showdowns, give “He Dreams of Giant” plenty of room to explore what makes this beleaguered artist tick. At times, Fulton and Pepe overplay their biggest trope: We hear, and sometimes see (often while pacing around against a white backdrop that may as well be his own mind), Gilliam cycling through endless ruminations (“Why does anybody create? We don’t have a choice”). The movie winds up a bit too enamored of the tortured artist motif, and by the time clips from Fellini’s “8 1/2” play as Gilliam compares himself to Marcello Mastroianni’s fictional director-in-crisis, they’re practically preordained.

However, “He Dreams of Giants” excels at capturing the moment-to-moment rush and collaborative energy of film production, eschewing practical details from more immediate ones, including a charming montage that finds the cast engaged in a table read dominated by their insuppressible laughter. Cinematographer Nicola Pecorino observes how the team remains enmeshed in the “same old adventure,” and it’s heartening to see Gilliam’s merry band of storytellers fully in their element.

But time has not been kind to Gilliam, and one scene that finds him visiting the doctor makes it clear that he’s racing against the clock. (It’s hard not to see shades of Agnes Varda’s doctor visit in “Faces/Places,” another glimpse of an aging auteur contemplating their mortality in tandem with the recurring urge to create.) More fragile than ever, Gilliam regards every small step forward on “Quixote” as a total victory. The movie’s ability to capture these moments — as when the film moves into its seventh day of production, when prior attempts were mired at six — imbues it with a bittersweet yearning on par with the project at its center.

It also captures the evolving nature of Gilliam’s filmmaking challenges in an industry that has little use for him. The movie recaps his most famous showdowns, including a public spat with studio executives over retaining his cut for “Brazil.” (Gilliam even paid for an ad in Variety begging his overlords to do his bidding.) He won the battle, but burned some bridges in the process.

These days, Gilliam’s appeal has shrunk to a niche market. “I get the films made,” he laments, “and they don’t get seen.” His last few efforts, from “Tidelands” to “The Zero Theorem” all the way through “Quixote,” bear out that observation. Gilliam remains a compelling director, but the uncompromising nature of his oddball work marginalized its commercial potential. Gilliam remains revered, and he does continue making movies, but “He Dreams of Giants” doubles as an intriguing window into the changing nature of the entertainment landscape.

With all of those variables in play, the decision to excise the final dramas of the “Quixote” saga feels like a missed opportunity. These thrilling twists, included a last-minute courtroom challenge to the Cannes premiere and Gilliam getting hospitalized for a mild stroke, feel as essential to the central mythos as Gilliam’s on-set experiences. But perhaps it’s only appropriate for a documentary about this interminable saga to remain a touch incomplete.

Regardless, “He Dreams of Giants” delivers whenever it returns to that face. The filmmakers appear to capture the exact moment when Gilliam wraps production, as he watches the scene unfold with a mixture of utter glee and total exhaustion. That feeling, a raw burst of emotion in a class by itself, transcends questions of whether the end result was really worth it. For Gilliam, there was no other way.

“He Dreams of Giants” premiered at the 2019 DOC NYC festival. It is currently seeking U.S. distribution.