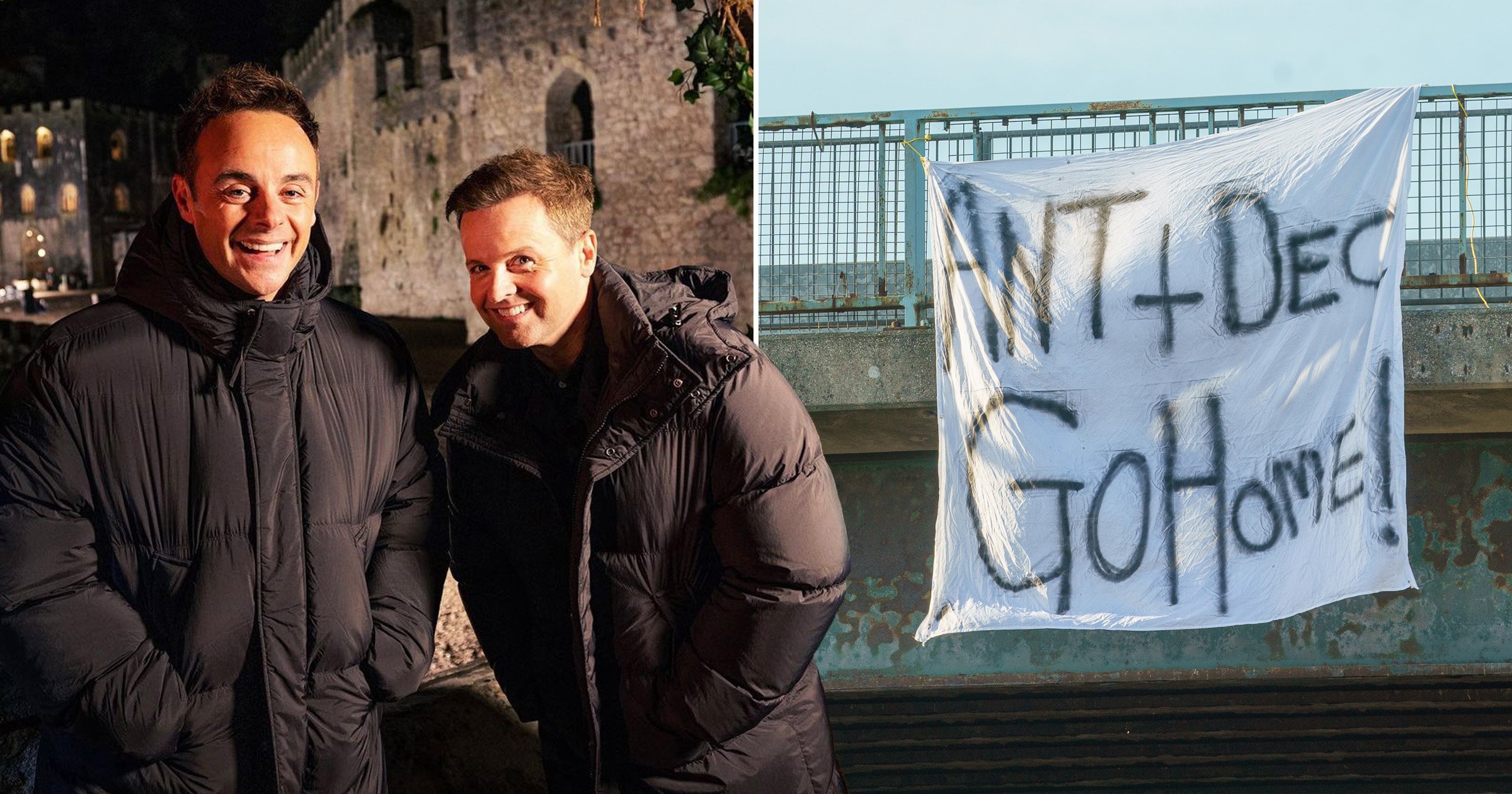 Ant McPartlin and Declan Donnelly haven’t been given quite the warm welcome they would have wanted ahead of I’m A Celebrity… Get Me Out Of Here! after a sign telling them to leave was put up near Gwrych Castle.

The Geordie duo confirmed their arrival at the location of this year’s camp on Tuesday on their social media channels.

They posted a pic beaming and wrapped up warm in huge black puffer jackets adding: ‘We’re here! Just holding the fort until our celebs arrive.’

However, their return to North Wales hasn’t gone down quite so well with everyone, as someone had a very clear message for the pair.

A sign put up on a bridge near to the site of the ITV show reads: ‘Ant + Dec. Go Home!’

The banner was spotted hanging on the A55 in Abergele, near the site of Gwrych Castle, just days before the show begins on ITV.

This is the second time I’m A Celeb has been filmed in Wales, after the broadcaster was forced to reconsider its options due to Covid.

It comes amid claims from some residents in Abergele who say the TV show has negatively impacted them.

Other photos released this week showed closures of footpaths and roads, with access to the castle having been cut off.

The Sun previously reported that eight feet tall fences have been erected around the grounds of the castle, blocking locals from using a popular route through the castle.

Earlier this year, Councillor Delyth MacRae explained some of the frustrations of those living in the area, saying: ‘Prior to the castle being built, there was an undesignated path from Llanddulas to Abergele and we are talking a long time ago.

‘That was for access to the mines and it was quicker to go down there and go to the market/go shopping.

‘Members of the public are feeling, rightly or wrongly, they are feeling very aggrieved their enjoyment of the land has been taken away due to recent changes of ownership as well as liability and security issues.’

However, some seem more pleased to see the show return as the Mayor of Abergele Cllr. Alan Hunter explained how good the show will be for ‘lifting spirits’ in the area.

He said: ‘I’m absolutely thrilled that I’m A Celebrity has come back to our town’s iconic Gwrych Castle. Leading up to the announcement that ITV was coming back, I’d lost count of the number of times residents and local businesses had asked if I thought I’m A Celebrity would come back.’

‘The return has certainly lifted the spirits of the town and there is noticeable excitement across the generations.’

Hunter went on to call the show a ‘boost for the economy of the town’ as well as to the restoration of the castle.

A number of shops in Abergele have prepared for the show’s premiere with cardboard cutouts of Ant and Dec – and even Kiosk Cledwyn – in their windows.

It’s also reported the nearby Abergele Golf Club has also been impacted by the show’s return and is now closed for non-members, up until December 13.

The publication also claimed ITV will be compensating for any revenue lost whilst the show takes place.

Others who will be entering the castle on Sunday night are Louise Minchin, David Ginola and music producer, Naughty Boy.

I’m A Celebrity… Get Me Out Of Here! launches Sunday at 9pm on ITV.