Social media can be stranger than fiction at times. This is what actress Amanda Seales learned after Sunday’s Insecure Season 5 premiere.

Seales’ character Tiffany — who is an Alpha Kappa Alpha “soror,” or sister — wore several pink-and-green AKA-inspired outfits and the sorority’s shield in the college reunion-themed episode, as she’s done a number of times in the show’s five-year history. (Read our full premiere recap here.) But for whatever reason, this time around, her fashion caught the attention of women who are actually in the sorority, who then took to Twitter to angrily attack the show and its costar because she is not an AKA in real life.

Seales then said in another video that she would’ve crossed the burning sands and pledged AKA if she’d had the time in graduate school at Columbia University, but she didn’t. Insecure‘s Molly, played by Yvonne Orji, is also an AKA but rarely wears as much pink-and-green insignia as Tiffany. Orji is also not a member of the sorority in real life. 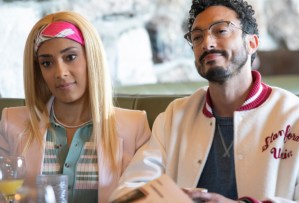 In one tweet, a fan of the show demanded that co-creator and star Issa Rae and HBO not disrespect AKAs by allowing a non-member to play one. Ever the jokester, Rae responded, “Oh s–t, let me tell @HBO to delete one of the upcoming episodes then, hold on.”

What do you think of Amanda Seales playing an AKA on Insecure? Is it disrespectful or fictional fun? Drop your thoughts in the comments.