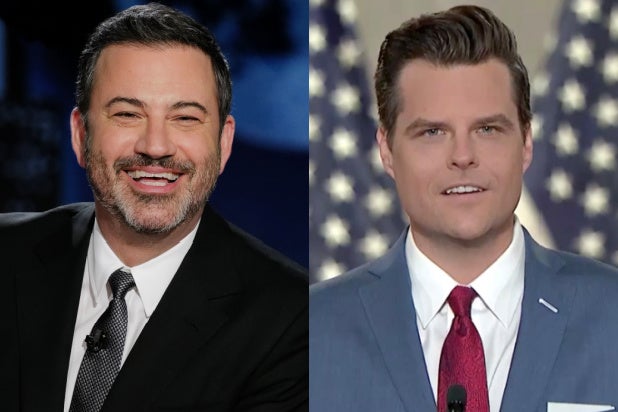 Jimmy Kimmel combined politics and pop culture on Wednesday, when he dubbed Florida congressman Matt Gaetz, who is reportedly under DOJ investigation for possibly violating sex trafficking laws, the “shrimp tail in your Cinnamon Toast Crunch.”

If that doesn’t make the ABC late-night host’s position on Gaetz clear enough, Kimmel added: “He is not well-liked by anyone” and “He’s the worst of the worst.”

Also, the actual worst was Gaetz’s recent and bizarre Tucker Carlson interview, which even the Fox News host called “one of the weirdest interviews I’ve ever done.”

Watch the video above.

If the Cinnamon Toast Crunch line went over your head, Kimmel is comparing Gaetz to the recent experience of comedy writer Jensen Karp, who (internet-)famously found what appeared to be cinnamon sugar-coated shrimp tails in a box of the popular General Mills cereal.

Karp went viral after posting a picture of what appeared to be shrimp tails that he found in his bag of Cinnamon Toast Crunch breakfast cereal. Manufacturer General Mills claimed that they weren’t shrimp tails but actually just masses of accumulated cinnamon sugar that clumped together as a result of the ingredients not being properly blended.

The 15 minutes of fame didn’t go Karp’s way for long. Two days after Karp’s post first took off, women began coming forward with stories of their experiences with him, alleging emotional abuse. He has not posted on social media since.

Karp is married to Danielle Fishel, who played the iconic character of Topanga in “Boy Meets World.”

According to the New York Times, the Justice Department is investigating whether Gaetz, 38, had a sexual relationship with a 17-year-old and paid for her to travel over state lines, thus possibly violating federal sex trafficking laws. Gaetz has denied traveling with a 17-year-old and claimed he is the victim of an extortion attempt “involving a former DOJ official seeking $25 million while threatening to smear my name.”

Gaetz says he has spoken with Carlson’s employer Fox News Channel (as well as “Newsmax, OAN…Fox Business, Real America’s Voice”) about a potential job, but Fox News denies those conversations ever happened.

“No one with any level of authority has had conversations with Matt Gaetz for any of our platforms and we have no interest in hiring him,” a Fox News spokesperson said in a statement to TheWrap on Wednesday.