Line of Duty fans are being denied binging rights to season six, instead, they are having to tune in every Sunday night to find out what happens next in the gripping BBC One drama. Last weekend, the highly anticipated episode one aired and DCI Joanne Davidson (Kelly Macdonald) was introduced to viewers and within minutes of her murder investigation team deploying from the police station, suspicions were raised as to whether she was a good or bad cop. DS Kate Fleming (Vicky McClure) was on the job with her and they had planned to arrest a key suspect in their enquiry but they were diverted when DCI Davidson saw an armed robbery occurring down a side road. Little is known as to why DS Fleming decided to leave AC-12 but fans think it has something to do with a romance.

In scenes towards the end of the episode, viewers found out DCI Davidson had been in a relationship with PC Farida Jatri (Anneika Rose).

The police chief had visited their shared house to collect the rest of her belongings and it was clear PC Jatri wanted to get back with DCI Davidson despite her cold shoulder in the office.

Later on, however, it seemed the real reason DCI Davidson was harsh to her ex was that maybe she has moved on and has feelings for someone else?

After being told off by her Superintendent, DCI Davidson stormed out of the offices and DS Fleming followed asking: “Boss, you okay?” 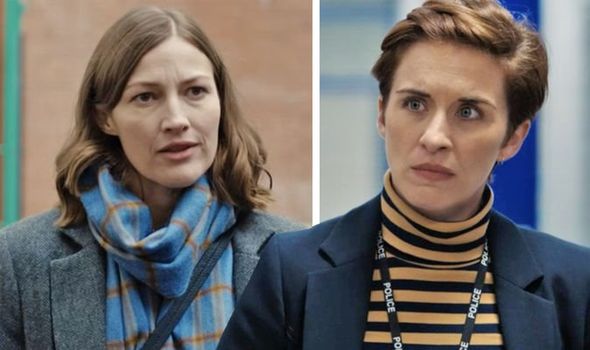 “I just took the Super through my decision on Terry Boyle,” DCI Davidson explained. “I’ve recommended he be put on police bail pending further inquiries. I’ve released him without charge.”

“The gunshot particles aren’t enough without spate of Gail Vella’s blood or tissues. And the Chis, Carl Banks, Terry Boyle’s flat – something doesn’t add up.

“I just want to catch the b****** who killed Gail Vella – she’s what this is all about. No way am I going after someone like Terry Boyle because he’s the easiest way out -” She said walking away. 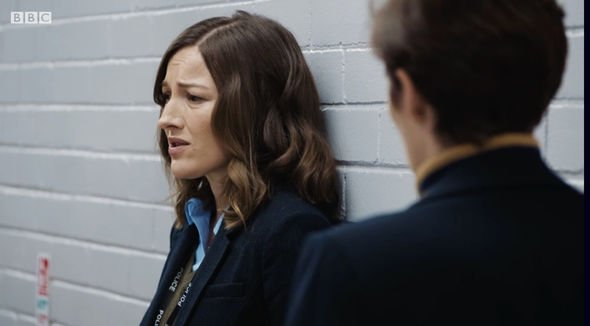 DS Fleming asked again: “Boss, is everything okay?” And DCI Davidson took DS Fleming’s hand into her own and said: “Thanks, Kate. I should  -” Before dropping it realising someone was coming and could see them.

Those watching at home wondered what DS Fleming’s real intentions were for working in the murder investigations unit rather than her usual AC-12 alongside DS Steve Arnott (Martin Compston).

Taking to Twitter one said: “Is she undercover or not? Already hating the fact we have to wait another week #LineOfDuty.”

“Kate and Steve not working together is not sitting right with me #LineOfDuty,” someone else mentioned.

DON’T MISS…
Emmerdale fans spot clue Aaron and Mack will become the new Robron [THEORY]
Anton Du Beke confirmed to return to Strictly but not as a judge [NEWS]
Escape to the Country: Jules Hudson surprised by show first [VIDEO] 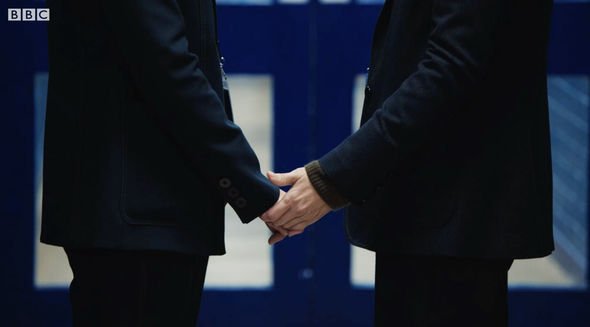 A third added: “So is Kate working undercover for AC12 or not? I’m more than confused. #LineOfDuty.”

“Is Kate actually undercover but using her real identity as she’s so well known as being from AC-12 tho?! @Vicky_McClure #LineOfDuty,” one asked.

A tweet read: “Need the trio back together Still think Kate’s undercover as herself this time #LineofDuty.”

“#LineOfDuty #LineofDuty6 pleaseee tell me this is all some elaborate deep undercover story everyone is holding up because i refuse to believe that Kate would ever leave AC-12,” a fan added.

“Oh God Kate’s going to enter a relationship with Jo to get intell isn’t she? #LineofDuty #lineofduty6 #lineofdutyday,” someone else chimed.

Hopefully, viewers will find out why DS Fleming decided to change teams, perhaps it has something to do with a romance with DCI Davidson?

Either way, her position will be compromised as AC-12 are now looking into the murder investigation’s unit for any corruption or foul play and they will immediately think DS Fleming is undercover.

Line of Duty returns tonight at 9pm on BBC One.