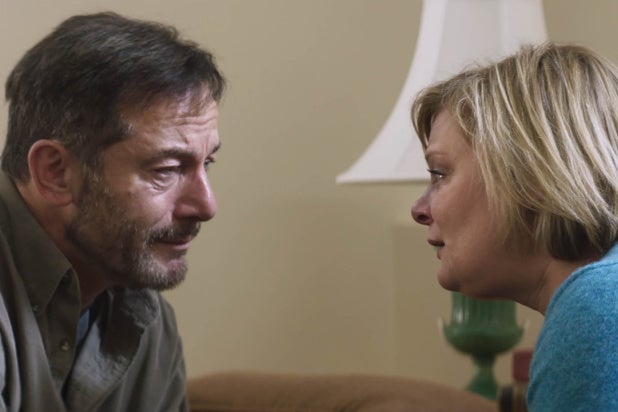 “Mass” brings together four grieving mothers and fathers, but two of them are parents of a mass-shooting victim, and the other two are the parents of the shooter. Actor-turned-filmmaker Fran Kranz’s choice of subject matter for his feature debut is certainly timely and provocative, but the emotions are too big and too messily human to fit into the tight box he has constructed to contain them.

World-premiering at Sundance, it’s a film that gives four talented actors lots of meaty material to work through, but Kranz writes himself into a corner where the only way out is via contrivance.

In the meeting room of a church’s basement, Jay (Jason Issacs) and Gail (Martha Plimpton) have come for a face-to-face sit-down with Linda (Ann Dowd) and Richard (Reed Birney, “House of Cards”). Years earlier, Gail and Jay’s son was one of several victims of a school shooting perpetrated by Linda and Richard’s son. After the trials, after the public statements, after the lawyers going back and forth, Gail and Jay want to have this conversation, armed with an admonishment from their therapist not to be “interrogating or vindictive.” They just want to get some answers about why this all happened.

Kranz sets his stage well, even crafting an uncomfortably funny prologue in which an overaccommodating church employee (Breeda Wool) shows the room to grief counselor Kendra (Michelle N. Carter), who has set up the meeting. Once the quartet of parents sit down together, there’s a palpable awkwardness, not just between the two couples but also between Richard and Linda, who no longer live together. It’s not long, of course, before recriminations surface, uncomfortable questions are asked, and unwieldy emotions are unleashed.

There are any number of great potential audition monologues in “Mass,” but the piece ultimately never comes together, mainly because Kranz wants to create a terse real-time encounter between emotionally shattered people, but he also wants a nice resolution at the end of the film. (If you thought the movie wasn’t going to press upon the multiple meanings of the title, guess again.)

Either the tension of this meeting or the path to closure could be reasonably manageable over the course of a film, but getting away with both would appear to be beyond this first-timer. It certainly doesn’t help that Kranz violates the room-bound claustrophobia for Jay’s big outburst; for the first time in the film, Ryan Jackson-Healy’s camera gets shaky and editor Yang Hua Hu (“The Public”) takes us outside of the room, as through Kranz didn’t trust the actors to register the impact of the moment (or the audience to perceive that impact).

“Mass” is certainly crafted to be an actor’s showcase, and like many an actor-turned-director, Kranz has a strong eye for casting and a definite talent for getting the best from his ensemble. We think we can predict how righteous anger and/or guilt will guide these characters, but Isaacs, Dowd, Birney, and especially Plimpton find unexpected grace notes and understated moments of humanity, even when the plot is contorting these characters into rushed catharsis.

Deserving of special mention are sound designer Kevin Seaton and sound mixer Greg Picard; they get the echo and bounce of a church meeting-room just right, and the sound plays a key role in accentuating the tension and the close quarters. (To spin that old joke about New York City in movies, the room tone is a character here.)

The United States remains a country that has yet to resolve its issues around guns and its grief over so many of its citizens who die tragically and needlessly every year. Collectively, as a society, we need to address those issues and that grief, and that’s a gargantuan task that is beyond the scope of “Mass,” no matter how noble its intentions.