Only One Major U.S. Entertainment Company Board Has Achieved Gender Parity | Chart

“We want you to present the best candidate, but she needs to be a she,” says one analyst on how to increase gender parity

Only one major entertainment company has already met the goal set by the 50/50 Women on Boards advocacy organization, which seeks gender parity on boards of directors, according to data recently released by the organization.

Of 11 major entertainment companies included in WOB’s 2021 report on U.S. public companies, only ViacomCBS has achieved gender parity with seven board members out of 13, or 53.8%. Notably, the company — the result of a re-merger of Viacom and CBS in 2019 — is also chaired by a woman, Shari Redstone.

On the other end of the spectrum, three top U.S. entertainment companies — Fox, AMC Entertainment and Discovery — have only one woman on their boards.

Discovery has by far the worst ratio: Only 8% percent of its 12-member board is female.

It is “interesting how the one board run by a woman has the most women on the board,” Amy Baer, the board president of Women in Film, told TheWrap in an email. It “shows you how important female leadership is to achieve parity/diversity.” ViacomCBS declined to comment on its gender parity numbers. 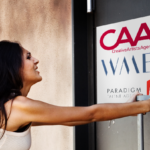 According to WOB’s Gender Diversity Index, Hollywood’s top entertainment content companies had boards that were 30.6% female, which is just above the national average of 24.4% for publicly traded companies on the Russell 3000 Index.

However, advocates say Hollywood’s boardrooms should lead more strongly on gender parity given the high profile of the entertainment industry and the fact that entertainment content should reflect society.

Here’s the ranking of 11 top entertainment companies, from highest to lowest. Although it is also a top entertainment content producing company, Sony was left off the list because it is headquartered in Tokyo, Japan, so it is not part of the 50/50 Women on Boards survey of the Russell 3000, which only includes U.S. companies. Sony has 11 board members, five of whom are women, or 45.5%. 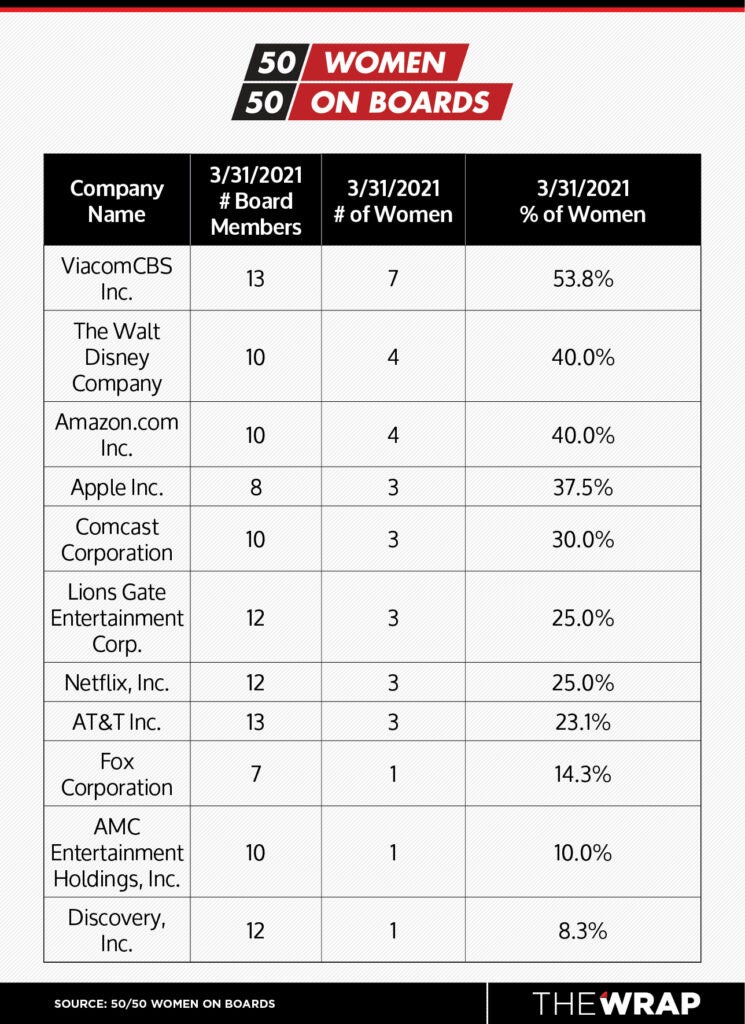 Representatives for the companies on the chart either declined comment or did not respond to a request for comment except Lionsgate, which has three women board members out of 12, or 25%.

“From the ‘1619 Project’ to the ‘Power’ universe, Lionsgate has been a home for storytellers creating relatable and inclusive content for diverse audiences across the globe,” Lionsgate board member Yvette Ostolaza, chair-elect of Sidley Austin’s management committee, told TheWrap. “Diversity in our corporate governance strengthens our ability to continue building on diversity and inclusion in our content, our talent and our workforce.”

WOB advocates for the inclusion of women on all public boards, but the nonprofit organization’s CEO Betsy Berkhemer-Credaire (also CEO of executive search firm Berkhemer Clayton Inc.) said the high profile of entertainment companies provides further incentive to achieve gender parity on the board.

“It’s clear that this does make a huge difference because Harvey Weinstein had no women on his board, (Wynn Resorts CEO) Steve Wynn had no women on his board,” Berkhemer told TheWrap. “And those were (among) the first big names to make headlines, and there have been many many more since.But when there are women on the board, women are at least looking at how other women and people of color are treated in the workplace.”

Berkhemer-Credaire added that corporate board membership also brings recognition — and money — to the women who join. “Thereason women want to be on boards is of course that it is the elite achievement of your own career,” she said. “Men have made money by being on boards for years and years, compounding their stock and their board payments over the years, and women just haven’t known about this as a way to enhance their income, build their own wealth and dynasties, if you will.”

Until recently, the 50/50 Women on Boards was called 2020 Women on Boards to reflect its dedication to filling 20% of all publicly held corporate board seats in the Unites States with women directors by 2020. That date represented the 100th anniversary of the 19th Amendment, which guaranteed women’s right to vote. California-based companies passed that goal one year early, reaching 21.3% in June 2019.

WOB also backed the drive to pass California Senate Bill 826 (sponsored by the National Association of Women Business Owners-California) requiring all publicly traded companies headquartered in California to have at least one woman on their boards by the end of 2019 and two to three women by the end of 2021, depending on the board’s size. (Boards of four or fewer members are required to have 1 member by Dec. 31, 2021; boards of five need two members, and boards of 6 or more need 3 women members to avoid fines.) The bill passed in September 2018.

California-based companies that don’t meet the deadlines will be fined $100,000 “for every woman they don’t have” on their board by the deadlines, Berkhemer-Credaire said. Three of the companies on the entertainment list — Fox, AMC Entertainment Holdings and Discovery — have only one woman board member. However, because they are not based in California they are exempt from SB826. However, they remain on WOB’s national target list to improve their numbers.

Umesh Ramakrishnan, a veteran executive recruiter and co-CEO of Kingsley Gate Partners, which has expertise in celebrity board membership, told TheWrap that if the population is 50% women, so too is the viewing audience.

Ramakrishnan said that all boards of directors, including entertainment company boards, need to take the bold step of making all new board members women in the near future in order to achieve a gender makeup that reflects society.

Ramakrishnan said companies using search firms to identify new board members should ask those firms to present only women as possible candidates. “It’s very easy to say, ‘Well, we just aren’t seeing any good candidates, or they don’t exist’,” he said.

Added Ramakrishnan, “We want you to present the best candidate, but she needs to be a she.”

Berkhemer said WOB has not set a date, but along with achieving gender parity of 50/50, the organization also wants to see 20% of all board members of public companies be women of color.

Berkhemer said that the organization continues to advocate for women on boards by sending out e-notes to public companies that are not making progress toward gender balance on the board. “(We write), ‘Gee, it’s time to take a look at your board,’ but we also send it to our entire database of about 20,000, and give them the click-through to send the same message to the investor relations department of that company.”

Added Berkhemer, “When the investors receive hundreds of emails, they take it to the board — they have to. The majority have very quickly put women on their boards. It’s not cool, the optic of having an all white, male board. It’s unacceptable to shareholders. It’s not about representation, it’s just good business.”

Across all industries, here are the 50/50 Women on Boards Gender Diversity Index key findings: 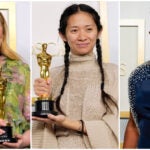