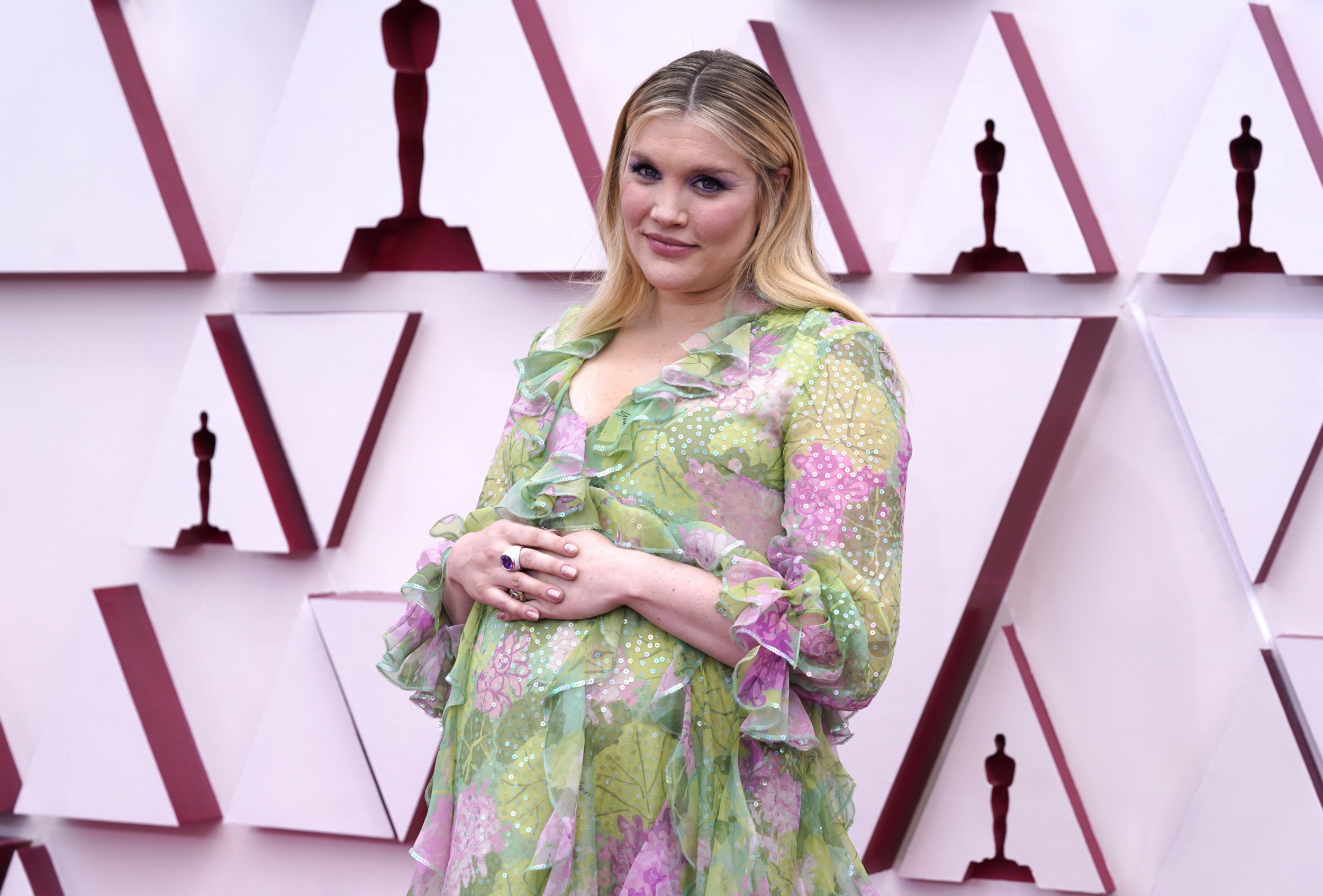 Emerald Ferrell turned up to the Oscars 2021 with surprise news, confirming she is pregnant and debuting her baby bump.

The Promising Young Woman director won best original screenplay at the awards on Sunday night for her work on the critically-acclaimed crime drama.

However, that probably wasn’t the biggest news with Emerald walking the red carpet and embracing her baby bump. It will be the actress and filmmaker’s second child with husband Chris Vernon after welcoming their son in 2019.

During her acceptance speech, Emerald, 35, shared a heartwarming memory from her childhood when she had written an Oscars speech aged 10, thanking Saved By The Bell character Zack Morris, played by Mark-Paul Gosselaar.

‘So, the only speech I ever wrote was when I was 10, and I had a look to see if there’d be anything useful from it, but unfortunately, it mostly thanked Zack Morris from Saved by the Bell,’ she told the audience.

‘He was my very supportive husband. Unfortunately, he hasn’t been as much a part of my life as I’d hoped, and so that speech is not that useful.’

When one journalist later asked if she was aware that Zack was trending on Twitter thanks to her speech, Emerald replied in the press room: ‘No, really? Oh gosh, how embarrassing.’

She then joked that she’d consider naming her unborn child after the famous character, adding: ‘Well, you know, actually, if Zack Morris doesn’t mind this situation [rubs belly], I think we should just really give it a go.’

Promising Young Woman was released to huge applause earlier this year, and follows a young woman who is traumatised by a tragic event in her past and seeks out vengeance against those who crossed her path. It stars Carey Mulligan, Adam Brody, Jennifer Coolidge and Laverne Cox.

Reacting to the success of the feature film, Emerald told E! on the red carpet: ‘It’s just, honestly, it’s all been incredible. And I just never expected—none of us expected, we made this movie in 23 days—we never ever expected it to get to this stage.

‘What has been so moving is people’s candor and the conversations it’s opened up for lots of people. It’s just really been really overwhelming but in a very positive way.’

Aside from her filmmaking accolades, Emerald is also best known for portraying Camilla Parker Bowles, the Duchess of Cornwall, in Netflix series The Crown.

Best original song: Fight For You (Judas And The Black Messiah)

Best international feature: Another Round (Denmark)

Best animated short: If Anything Happens I Love You

Got a showbiz story?
If you’ve got a celebrity story, video or pictures get in touch with the Metro.co.uk entertainment team by emailing us [email protected], calling 020 3615 2145 or by visiting our Submit Stuff page – we’d love to hear from you.