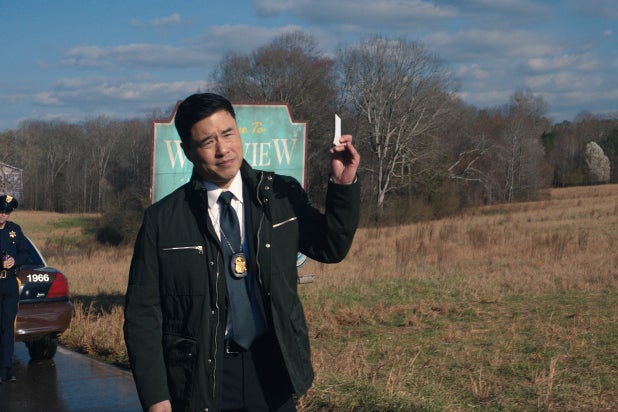 Randall Park’s return as FBI Agent Jimmy Woo in “WandaVision” gave die-hard Marvel fans a pretty darn good payoff to a small, but hilarious, gag from “Ant-Man in the Wasp.”

Upon meeting Teyonah Parris’ S.W.O.R.D. agent Monica Rambeau for the first time at the Westview Anomaly (the show’s name for whatever is actually going on in the sitcom-inspired world that Wanda and Vision are in), Woo flashes his business card with a pretty nifty sleight of hand, appearing to pull the card out of thin air. For those that don’t quite remember, in “Ant-Man and the Wasp” Woo notices that Scott Lang (Paul Rudd) has gotten pretty good at learning magic card tricks on the internet during his two-year house arrest, and asks him how he learned. There’s even a follow-up joke when one of Woo’s co-workers walks into his office while he’s practicing (unsuccessfully).

“He’s worked on them over the years,” Park told The Wrap. “I don’t know who exactly came up with the idea of opening with that, but I’m so glad they did. But it’s not surprising to me, because Marvel is just so detail oriented.”

“WandaVision” sees the return of both Park’s Woo and Kat Dennings’ Dr. Darcy Lewis (from the first two “Thor” movies), both of which surprised the actors, considering that neither of their characters have any prior history with Wanda (Elizabeth Olsen) or Vision (Paul Bettany). “I wasn’t really expecting to come back,” Park admits.

Dennings, who last appeared in 2013’s “Thor: The Dark World,” said that of all the upcoming Marvel projects (which got even bigger on Monday with the addition of Ryan Coogler’s Wakanda series), “WandaVision” was probably the least likely. “I knew that Disney+ and Marvel were coming together to to do all these different shows. I will say ‘WandaVision’ was the last one I expected to be in.”

Park argues that his small moment of card trick perfection was indicative of Woo’s larger growth since “Ant-Man and the Wasp,” back when he was essentially reduced to being a glorified parole officer to Paul Rudd’s Scott Lang.

“That one instance, it does show a lot of character development. The guy has gotten better, at not just that, but probably a number of things. Taking on bigger cases. And so I think that’s really cool,” he said.