Sansón and Me Review: This Melodic Documentary Recreates an Unsettling True Story

There’s an interesting desire to use the manner of filmmaking to reenact and process trauma, especially in the documentary space. In 2012, director Joshua Oppenheimer crafted “The Act of Killing,” a documentary wherein a Khmer Rouge killer re-enacted the murders he participated in. A similar feeling is evoked while watching Rodrigo Reyes’ “Sansón and Me,” a documentary that explores, through recreating key moments, the life of a young man serving life in prison for murder.

Director Reyes first met Sansón Noe Andrade when he acted as interpreter during the young man’s murder trial. Reyes was captivated by Andrade and, as Andrade spent his life in prison without the possibility of parole, the two started writing letters to each other. Reyes eventually conjured up the idea of a movie, told with Andrade’s family members playing his mother, father, and younger versions of Sansón and his sisters. As Sansón starts to look back on his life, the filmmaker is able to reflect on the cycle of violence and poverty in Mexico.

“Sansón and Me” has a bit of a rough start, introducing two boys who exchange a slo-mo glance before a slo-mo gunfight ensues. If one were going off just the opening scene, you’d assume the documentary was an arty, over-the-top series of images meant to convey heightened emotion with very little story. We meet Reyes and Sansón (played on-screen by Gerardo Reyes) as they’re re-creating Sansón’s sentencing. The audience has no reason to believe what they’re seeing isn’t “real,” outside of it taking place on a stage with a movie screen in front of them. It’s from here that Reyes tells the audience the conceit of the movie within the movie they’re watching, and his desire to tell Andrade’s story.

As a director, Reyes enjoys looking into the world of memory and the experience of Mexican migrants. He tells Andrade in his letters that the experience of being an outsider mimics Sansón’s own adolescence growing up as a Mexican boy in California. Because the prison wouldn’t let Andrade be “rewarded” by being in a movie, he is not actually allowed on-camera.

Instead, newcomer Gerardo Reyes plays Andrade as an adult with a sensitivity and empathy that’s astounding to see in someone with little experience. Playing Andrade, young star Reyes reads his letters and performs in the scene opposite Reyes, the director, with a sadness and resignation. Included in the doc are clips of the auditions for Andrade, and to see the other actors considered there’s a cockiness that comes off from most of them. In Reyes’ audition, he’s polite and still feels very much like a child trying to be an adult. 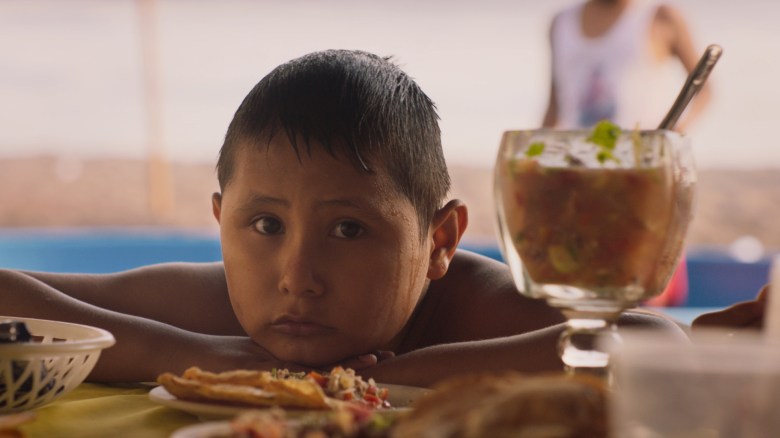 There are two halves to the documentary: director Reyes telling Andrade’s story and various interviews with Andrade’s family members. The latter half veers firmly into standard documentary territory and it’s hard not to wish this section didn’t figure more prominently in the feature, which barely clocks in at 90 minutes. Reyes certainly wants to show why Andrade ended up on the path he’s on, but it comes from not simply showing Andrade’s perspective. Reyes feels he understands who Andrade is, but too often that’s meant to be taken as the only opinion.

At one point, he interviews Andrade’s sister, Débora, who discusses the love she has for her brother and yet how estranged they are. Reyes later reveals that Débora doesn’t have a strong relationship with her own children, who are playing younger versions of herself and Andrade, because of a drug problem. Andrade’s uncle, who is playing Andrade’s father, admits he couldn’t be there for his nephew when he went to prison because he, himself, was in jail. There’s a bleak outlook on how poverty and incarceration lead to a cycle where Andrade was almost damned from birth. As Reyes shows, using Débora and her youngest son as a baby version of Andrade, these people all had hopes and dreams, until living crushed it out of them.

But these moments are few. Andrade’s girlfriend, the mother of his child, is never interviewed, possibly because it was her brother that Andrade claims put him in prison. But the familial interviews yield a better look at the concept of memory Reyes plays with. To hear Débora, and even Andrade in his letters, talk about their childhood, there’s a nostalgic sense of love in spite of the hard times and abuse they suffered. Andrade admits he didn’t necessarily know his childhood was bad, that his father’s drinking and infidelity would define, and possibly bring about, his mother’s death. It’s only through the process of talking through it that he can cope with it.

This tends to leave the film within a film elements feeling a tad superfluous, though they do serve the purpose in helping Andrade and his family see their life clearer. When the movie eventually deals in the final minutes with Andrade’s crime, it often feels like a punt. Reyes is surprised that Andrade didn’t hear the gunfire, blaming his loud music, but it’s a sequence that relies more on Reyes saying what the audience is thinking than Andrade processing the crime he’s committed, especially as there’s no ambiguity presented. Andrade’s story is fact, as far as we know.

Watching and processing “Sansón and Me” is a melancholy experience. As Reyes tells Andrade early in the process, this documentary won’t exonerate him or get him released from prison, but for Andrade, the opportunity to tell his story and have a living example of his memories saved is enough.

“Sansón and Me” premiered at the 2022 Tribeca Film Festival. It will screen on PBS’ Independent Lens in 2023.