Saoirse Ronan earned her first Oscar nomination at age 13, too young to embark on a formal campaign. Her second — which came eight years later for Brooklyn — was preluded by a talk show blitz that saw the actress stressing one talking point in particular: How to pronounce her name. From Ellen to The Graham Norton Show, The Late Show With Stephen Colbert and The Late Late Show With James Corden, Ronan walked each host through the same mnemonic, “Ser-sha, like inertia.”

It’s a name worth knowing. Now 26, Ronan has established herself as a generational talent, a former child star from Ireland who earned as much acclaim for her turns in projects then as she does now. Having effortlessly navigated into more mature work, her latest offering is the period drama Ammonite, about 19th century fossil hunter Mary Anning.

“I read the script for the first time while I was shooting Little Women,” Ronan says over Zoom from London. “That movie — on and off set — was very busy and loud and there were lots and lots of people involved and lots of chatting, talking over each other, lots of energy. So, I think naturally I wanted to do something that was quite different in terms of scale and energy. And Ammonite came along.” 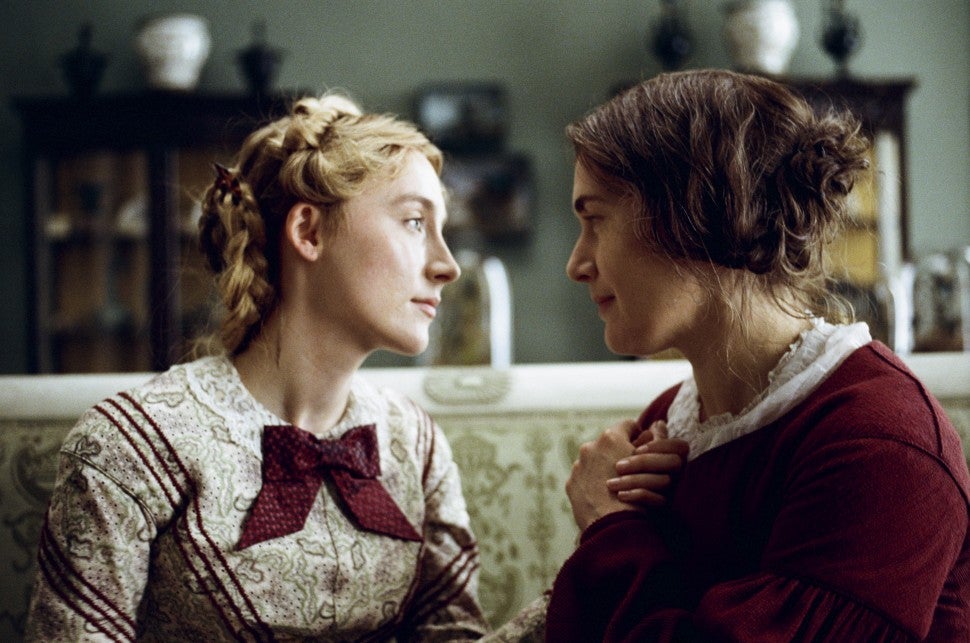 The sophomore feature from God’s Own Country director Francis Lee, the film takes its name from the extinct mollusks that Anning (Kate Winslet) excavates, dug-up treasures long forgotten under the surface. There’s a metaphor there, as the closed-off Anning comes to know Charlotte Murchison (Ronan), the younger wife of a fellow paleontologist sent to convalesce by the sea, and the women spark an intimate connection.

“We had met multiple times before at festivals and parties and things like that and always got on like a house on fire,” says Ronan of Winslet. “Me being the younger of the two, I look up to somebody like her and the career that she’s had and how hard a worker she is — because she’s a very, very hard worker — and for her with me, she’s been incredibly supportive, even before we did Ammonite. Kate’s always been in my corner.”

Ronan and Winslet spent months rehearsing — exploring the emotional breadth of the story as well as mastering the physicality of the 19th century — before filming began along the beaches of Lyme Regis on the southern coast of England. “The whole notion of her being Rose in Titanic kind of goes out the window when you meet her,” Ronan recalls. “I always felt very relaxed with her, and I think that’s when you do your best work.”

While Anning is very much a real figure in history, little is known about her romantic life, queer or otherwise. Lee has said his intention was “to give her a relationship that felt worthy of her.” Thus, a polite tolerance of Charlotte begets a tender sign of affection whilst whiling away over one of her relics becomes a passionate affair, including an already much-touted bodice ripper of a sex scene.

“I’ve been very lucky that I’ve never felt overly nervous doing sex scenes,” Ronan says. “To me, they’re so completely technical. It’s not like a kissing scene, where you’re actually kissing someone. It’s purely technical and choreographed. I’ve just always sort of seen it as that, which I think is probably a good way to go about it.”

“In terms of a sex scene between two women, the two of us naturally took the lead. We know what we like, really, and we could have an open conversation about that,” Ronan says for her part. Lee followed their lead. “We talked through the progression from one sex scene into the next and how the characters needed to take it a step further each time.”

“But definitely, being able to lead the conversation and take it in the direction we felt comfortable with was wonderful.” She grins, “And it was fun! It was really fun to go, ‘Well, what about this? And what if you do that?’ I think that was a new experience for both of us.”

Ammonite was selected to premiere at Cannes, prior to its cancellation due to the coronavirus. The same came to pass for the Telluride Film Festival, before it made it to screens, at long last, at TIFF. Ronan has never been to the former, and though she expects it would’ve been fun to hobnob in the south of France, she feels sorrier for the film missing out than herself. “I’ve not [had to] put high heels on and felt very smug about it,” she says.

It’s the sort of festival run generally indicative of awards season potential, word of mouth that begins on the crescent or in the mountains and fuels a project on through to the early morning hours of Oscar nominations. Ronan knows the routine well, with a gift for picking films that have netted her four Oscar nominations thus far. (She was also recognized for Lady Bird in 2018 and Little Women earlier this year.)

“There’s been films that I’ve been involved in that have had, you know, Oscar buzz before they are even made — because of the people that are involved in them or because of the subject matter — and it doesn’t go down that road at all,” she considers. “I’ve learned that more and more as I’ve kind of gone through it.”

Yet here we are anyway, with Ammonite and its leads being hailed as contenders heading into an increasingly unusual awards season. “If that were going to happen with this movie this year with everything being as weird as it is, that would be wonderful,” Ronan hedges diplomatically. “But to be honest, because of the pandemic, I’m just happy the film’s got a release.”

That’s ultimately what matters to her at the end of the day: To keep working and have her work seen. (Ronan’s other upcoming film, Wes Anderson’s The French Dispatch, has been shelved for the time being.) The upshot of becoming gradually more famous (although she disclaims, “I look at people like Taylor Swift that are very, very, very famous, and I don’t know how they do it”) is that she is able to get the projects she wants to make made. That’s because of the awards, the acclaim, and yes, by people knowing her name — and how to pronounce it.

“It took a lot work, it took a long time, but I think we’ve gotten there,” Ronan says, then just as quickly she adds, “There’s still the fair few people that will come up to me and be like, ‘How do you say it?’ People do still get a little bit confused.” She chuckles, “Or they’ll think that I’m just somebody else. They’ll be like, ‘I loved you in Winter’s Bone,’ and I’ll be like, ‘Ah, cheers!'”

Ammonite is in theaters Nov. 13 and available on demand Dec. 4.