The thrilling State of Origin decider was a ratings winner for Nine but failed to beat audience numbers for the game's opening clash.

The State of Origin has so far dominated the top five overnight programs this year, with the final showdown between NSW and Queensland last night becoming the second-most watched TV program of the year. 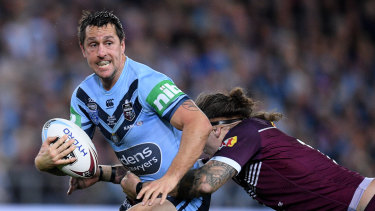 Mitchell Pearce of the Blues during game three of the 2019 State of Origin in Sydney.Credit:AAP

Origin's opening and closing games have proven to be more popular than Nine’s ratings juggernaut Married at First Sight (Nine, which also screens Origin, is the owner of this masthead). This year's MAFS finale netted an average 1.98 million metropolitan viewers, with game two of the State of Origin and the men's final of the Australian Open, screening on Seven, rounding out the top five.

Meanwhile, just 249,000 Melburnians tuned in to the clash.

Both the first and third Origin clashes of 2019 proved more popular than the second game, which was held in Perth. The June 23 match was watched by an average 1.96 million viewers nationally.

Thankfully, rugby league enthusiasts tuning into Wednesday's game managed to dodge the streaming issues that plagued round one. Nine's streaming service 9Now was marred by technical difficulties last month, which the broadcaster pinned to one of its service providers.

Nine's director of sport, Tom Malone, said in a statement there was no other sporting contest like the State of Origin.

"It delivers again and again because of the passion and pride across cities, towns and states," he said. "And because of the incredible athleticism of the players."