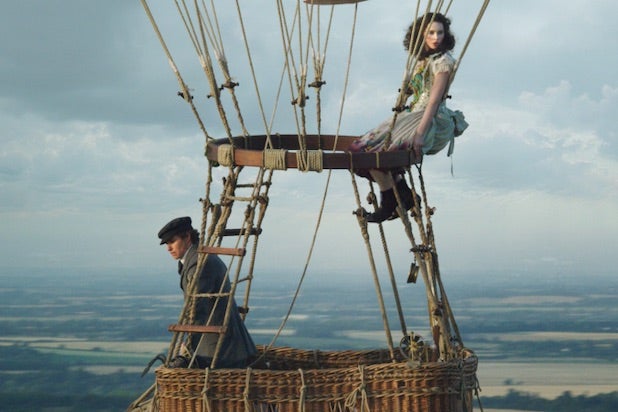 A would-be slice of British spectacle that most audiences will see only at home, “The Aeronauts” — in tone, technique and story — epitomizes films that are too big for television but not quite enough for the IMAX screens they aspire to fill.

Director Tom Harper (“Wild Rose”) captures both the vertiginous danger and exhilarating beauty of James Glaisher’s real-life, record-breaking 1862 balloon flight, but the script by Jack Thorne (“Wonder”) weighs down stars Eddie Redmayne and Felicity Jones with too many fictionalized elements for the film’s sense of inspiration and empowerment to get off the ground.

Redmayne plays Glaisher, a disgraced, headstrong academic who recruits balloon pilot Amelia Wren (Jones) to break the flight altitude record and, in so doing, to unlock essential secrets about air, wind and atmosphere he hopes to apply to weather forecasting. Still grieving the loss of her husband Pierre (Vincent Perez), Amelia projects an almost reckless sense of showmanship that quickly clashes with Glaisher’s single-minded determination to document quietly every change in pressure or gust of wind.

Watch Video: Eddie Redmayne and Felicity Jones Soar Higher 'Than Anyone Has Ever Been' in 'The Aeronauts' Trailer

But as their dirigible ascends above the cloud line, their respective traumas — her loss, his humiliation — are unflatteringly laid bare across the silent, shadowless landscape, while the prospect of success for their mission grows increasingly dire.

Gradually, the effects of the altitude and the cold start to wear on them, especially after Glaisher reveals that he jettisoned protective clothing that she insisted on bringing in favor of his own scientific instruments. But their differences quickly become irrelevant after they rise to a height where virtually the entire balloon freezes, including the mechanism that allows them to maneuver the gas keeping them afloat.

As the danger mounts, Amelia must come to terms with her past loss in order to prevent a future one, while Glaisher attempts to reconcile his scientific ambitions with the simple and seemingly inescapable truth he’s faced with — namely, if the duo cannot quickly find a solution, there won’t be anyone left alive to report their record-breaking discoveries.

For an actor prone to give such mannered performances, Redmayne delivers one of his most straightforward turns in recent memory as Glaisher, a nerd even among scholars whose vision for the future is as much obscured by the massive chip he has on his shoulder as the naysayers and doubters who consider his theories laughable. His particular brand of fearlessness is driven by obstinacy and even revenge as much as sincere determination, whereas Amelia is desperately overcompensating for the unimaginable loss of her husband with a bravado sporadically undercut by grief, loneliness and despondency.

Jones skillfully downplays the extremes of her feelings to more nuanced and substantive effect, but when played against one another, the characters become one-dimensional ciphers for one-dimensional conflict that escalates directly past something compelling into cartoonish melodrama.

To be fair, their individual issues are sketched pretty crudely to begin with; at one point Amelia’s friend Antonia (Phoebe Fox, “Eye in the Sky”) actually says out loud, “You can’t fly away from your problems, you have to face them!” But together, the characters are more interesting when they’re finding an accord for their different perspectives than when they’re butting heads, and just generally cuter when sharing delight over what they’ve accomplished than wrestling for control of a suspended wicker basket.

Harper allegedly shot as much of the film practically as possible, and uses wide-angle lenses to intensify the stakes of each venture near the edge of the basket or when Amelia shimmies up the ropes to the balloon above. And there’s certainly something awe-inspiring about the gorgeous vistas that the two characters float through as they exorcise their demons, wherever the line is between reality and computer-generated imagery.

Audience members who harbor a fear of heights may find themselves cringing alongside the characters as they improvise solutions to problems that will keep them adrift in the air (or at least from falling precipitously to the ground). But there’s also a limitation to shooting a physical space that feels like it can’t be real, in dramatic scenarios that simply aren’t possible to successfully capture on film, and Harper runs right up against that in his efforts to photograph their adventure in dynamic ways.

The film also betrays a key rule about voice over — namely, don’t start using it at the end of a film if you haven’t been using it at the beginning — that speaks to its inconsistent way of bringing together its ambitions and its limitations. But ultimately, Harper’s is that rare movie that works much better when the characters are finding solutions and working together rather than falling into conflict and creating problems.

Given the fact that so few people will likely see it on the big screen, the sequences that were designed or envisioned for IMAX cannot help but overwhelm the rest of the film. But when it comes to Glaisher and Wren, two people pursuing their dreams at the possible expense of their lives, “The Aeronauts” falters not because it’s intimate or even mundane, but because everything else simply feels small.