The Masked Singer returned for its fourth season Wednesday night, combining with the premiere of the Ken Jeong-hosted I Can See Your Voice to give Fox the victory in the adults 18-49 demographic (Live+Same Day)on a busy night that featured the finale of NBC’s America’s Got Talent and CBS’ Big Brother.

The COVID-impacted fall schedule is still struggling to bring back viewers to broadcast TV during premiere week, with overall TV usage last night down -21% from last year, in line with the declines on first two nights of the season.

Masked Singer, which landed its first Outstanding Competition Program Emmy nom this year, scored a night-leading 1.4 rating in the 18-49 demo and drew 5.42 million viewers for a premiere featuring a tweaked format, virtual audience voting and a new venue owing to restrictions because of the pandemic. This was down double-digits from last season and qualifies as a Live+SD series low in 18-49 and total viewers.

The celebrity competition show served as a launchpad to I Can See Your Voice (1.1, 4.46M), which looks to be the highest-rated L+SD fall debut in two years among 18-49 and the best unscripted debut in three years (the latter since Ellen’s Game of Games which clocked a 1.7 L+SD demo rating in its December 2017 debut).

NBC won in overall viewers with the season finale of AGT, which also had to modify its production amid the pandemic. An 8 p.m. special (0.6, 5.24M) led into the two-hour live finale (0.8, 6.31M), the latter growing two tenths to end up as the night’s most-watched program, setting season highs in viewers and the demo for a Wednesday edition. The closer also was down double-digits from AGT‘s 2019 finale.

Big Brother (1.1, 4.03M) grew a tenth from its previous episode Thursday (it took last Wednesday off while CBS aired the ACM Awards). That boosted a fresh Love Island (0.6, 1.88M), which grew two tenths from its Tuesday episode. The network’s night wrapped with 48 Hours: Suspicions (0.4, 1.78M).

ABC’s “Wonderful World of Disney” movie showcase returned last night for the first time since June with the network broadcast premiere of Guardians of the Galaxy (0.4, 1.96M), followed by an encore The Goldbergs. 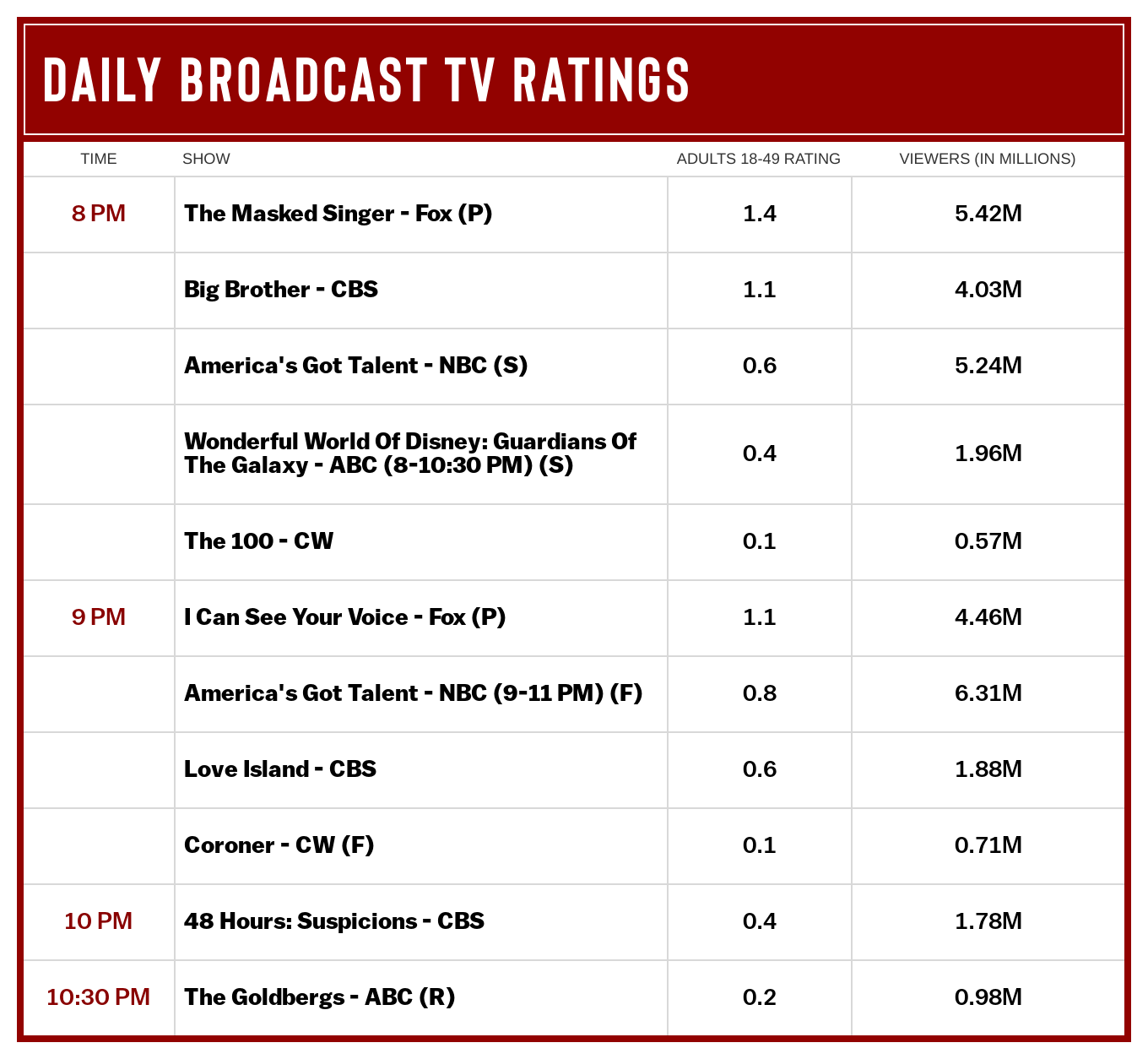