After that ribbiting premiere reveal, all bets are off 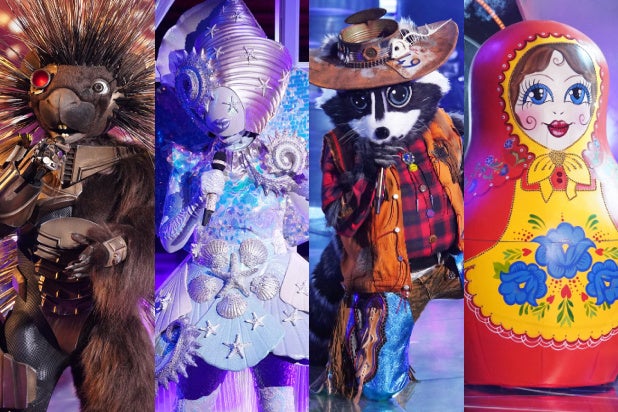 (Warning: This post contains major spoilers for the Season 5 premiere of Fox’s “The Masked Singer.”)

The fifth season of Fox’s “The Masked Singer” premiered last night with an episode that ended by revealing the season’s first unmasked contestant, the Snail, was Kermit the Frog. Yeah, so now that we know the show really means business with this “game-changing” label for Season 5, all bets are off when it comes to who could be behind the mask.

While we already know the Snail’s true identity is everyone’s favorite Muppet, the real names of the four other celebrity contestants that performed as part of Group A last night are still under wraps.

See below for TheWrap’s roundup of the best guesses from fans and “The Masked Singer” judges Jenny McCarthy, Robin Thicke, Ken Jeong and Nicole Scherzinger about the identities of the contestants in Group A.

Robopine (f.k.a. Porcupine)
The prickly competitor, who quickly renamed himself once he took the stage and sang “Never Too Much” by Luther Vandross, is Jamie Foxx, Lionel Richie, Ginuwine, Eddie Murphy or Tyrese, according to the best guesses from “Masked Singer” panelists and fans on social media.

Russian Doll(s)
One became two when this contestant rolled onto “The Masked Singer” stage last night, with a smaller Russian Doll coming out from its nesting place inside the larger costume when they performed Michael Jackson’s “Man in the Mirror.” It’s unclear just how many competitors are inside the Russian Doll right now, but “The Masked Singer” team and audience think their secret identity could be either the members of Lady A, “Glee” stars, Gwen Stefani and Tom Dumont, or the Hanson brothers.

Raccoon
After this black-and-white critter’s wild performance of “Wild Thing,” judges and fans at home think he might be Sammy Hagar, Mike Tyson, Danny DeVito, Brian Johnson or Danny Trejo.

Fox has said “The Masked Singer” will start Season 5 with 10 scheduled contestants, who will be broken into two groups of five competitors, Groups A and B. But the broadcast network also said that throughout the season, the show will introduce “several” surprise contestants at the end of episodes in “Wildcard” rounds, giving these crashers a chance to unseat the regulars.

So next week when Group B — Phoenix, Grandpa Monster, Chameleon, Black Swan and Piglet — debuts on “The Masked Singer” stage, there’s a chance a “wildcard” competitor could be coming in, too.