Move Over, Facebook: How Gaming Is Becoming the New Social Network

TheGrill 2020: Gaming and esports experts agree that the online multiplayer community is quickly becoming the destination for community fun

Throughout the pandemic, people worldwide have flocked to multiplayer and online video games at an unprecedented rate as a way to continue to keep in touch and engage in friendly, entertaining competition — and industry experts believe that gaming is quickly becoming the “new social network.”

Unlike Facebook, its subsidiary Instagram, Twitter, or any other social network, video games have worked to develop and implement a nearly airtight system for reporting players who are openly offensive in chats or during a game. As Ross Gerber, co-founder of investment firm Gerber Kawasaki, said during TheGrill’s 2020 panel on gaming and esports, he’d rather have his young son play video games than see him sitting around on Facebook.

“Gaming is social media now, I’d much rather have my kids on ‘Minecraft’ than Facebook,” Gerber said. “Our entire investment thesis is gaming is the new social media.”

Gerber said gaming companies like Activision and “League of Legends” developer Riot Games “have protected the community from harassment and attacks while social media has done nothing to protect anybody from any of the harassment and hate.”

Gerber added, “The fact you can run a game where you shoot other people and have it be a safe place for your kids to communicate is a tremendous feat for the gaming community and companies like Activision. It’s a safe place to play.”

Johanna Faries, the commissioner for “Call of Duty” developer Activision Blizzard’s esports outfit, the Call of Duty League, said that Activision and other multiplayer game companies have a responsibility to make sure that they’re keeping cheaters and trolls off their servers. While “Call of Duty” isn’t a game that Gerber, for instance, will let his eight-year-old son play, there is a large amount of younger players, particularly Generation Z and Millenials, who spend hours per day on the game.

Faries said, “There’s never one silver bullet to prevent toxicity in culture, we haven’t figured that out yet.” She noted that the system can work “if everyone is doing their part” to be civil and report players who are in bad faith.

People who are deeply passionate about esports or gaming tend to consume many different types of content in those areas, something which Faries said the Call of Duty League tries to capitalize on. Faries said, for example, fans would (pre-pandemic), go to see a match and often follow along with play highlights on the “Call of Duty” mobile app or on social media, where a whole ecosystem of sponsored and third-party video creators and commentators produce content about the games.

There are also pro gamers, who will often stream outside of competition, giving fans an unprecedented level of access to their favorite stars. Even if the games being played are older brands — “Call of Duty” is 17 years old, while another popular brand, Nintendo’s Mario franchise turned 35 this year — the combination of social networking and addicting gameplay keeps fans coming back.

“People now are leaving social media for the new social network, as (Gerber) said, which is gaming. I’m still surprised that this hasn’t caught on as much as it should,” Montgomery said during the panel. Montgomery added that Enthusiast Gaming counts over 300 million monthly active users, and in a recent survey, half of them said they didn’t use Facebook at all. 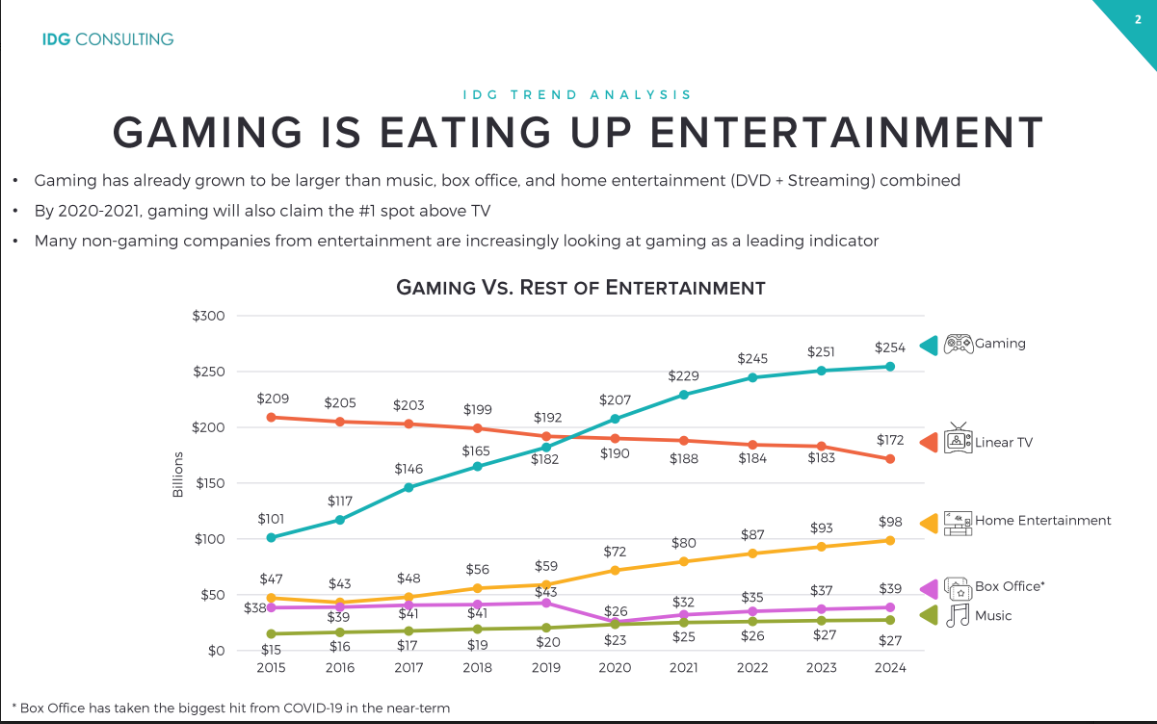 TheGrill panel Thursday was preceded by a presentation from IDG Consulting chief executive Yoshio Osaki, who briefed panelists and viewers on the state of the gaming market in the midst of COVID-19. Osaki agreed that gaming is becoming more social, and said, “It’s now become one of the only socially acceptable ways of engaging and spending time and money on entertainment, especially in the age of COVID.”

IDG Consulting found that the median average age of the top gaming franchises on console and PC was 16, which indicates that players who start with one title are usually incredibly loyal to the series and will continue to grow up playing the game.

For over a decade, TheWrap’s Grill event series has led conversations on the convergence between entertainment, media and technology, bringing together newsmakers to debate the challenges and opportunities facing content in the digital age.

TheWrap has created a digital-first experience for TheGrill 2020. This year’s event will focus on the future of theatrical, streaming revolution, building inclusion from within and the growth in podcasting and gaming.  Attendees will have access to keynotes, panel conversations, roundtable discussions and virtual networking.