Phillip Schofield and Holly Willoughby took to the stage at the National Television Awards, as This Morning picked up the daytime award after they faced major backlash in recent weeks.

Following the Queen’s death, Holly and Phil were accused of jumping the queue to see the late monarch lying in state. They later denied the claims, clarifying that they were there as part of the world’s media, that they didn’t take anyone else’s spot, and they would never jump a queue.

Despite the backlash, This Morning picked up the coveted award at the event, with Holly and Phil accepting the award along with Alison Hammond and Dermot O’Leary.

Holly went on to speak about This Morning’s ‘special relationship’ with its audience.

‘You make our show for us, you really do,’ she added. 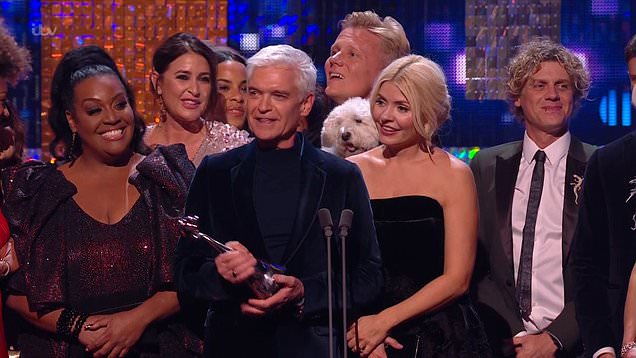 Meanwhile, Alison, who moments before had lost out on the best presenter gong to Ant and Dec, left fans in stitches as she referenced the award.

‘We all know I should have won one of these as well!’ she quipped.

It’s been a dramatic couple of weeks for Holly after she and co-star Phillip Schofield found themselves in hot water following their visit to the Queen’s coffin while she was lying in state.

During their next This Morning appearance on September 20, the pair opened the programme by addressing the backlash.

Holly said over a clip featuring footage of their visit: ‘The rules were that we would be quickly escorted around the edges to a platform at the back. In contrast, those paying their respects walked along a carpeted area beside the coffin and were given time to pause.

‘None of the journalists and broadcasters there took anyone’s place in the queue and no one filed past the Queen.’

She continued: ‘We, of course, respected those rules, however, we realise that it may have looked like something else and therefore totally understand the reaction. Please know that we would never jump a queue.’