“We’re very similar to the characters we play in that show,” former “Home Improvement” star says 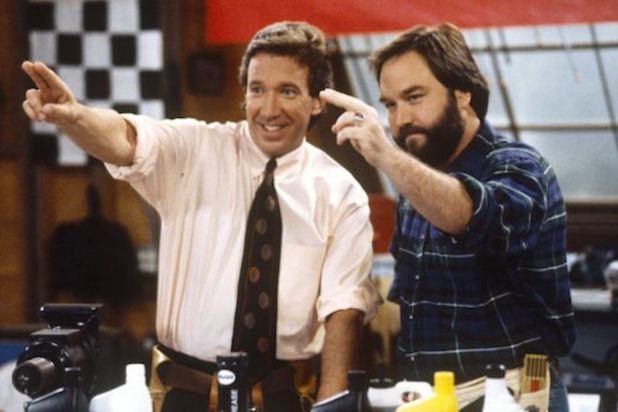 But Allen says he “never even thought about” having Karn host this series, which he called “kind of a live version of ‘Tool Time.’” (Even though “Assembly Required” is not live, to be clear.)

“My only hesitation was I didn’t want to embarrass myself,” Allen told reporters during a virtual panel for “Assembly Required” at the Television Critics Association winter press tour Thursday, ahead of the show’s Tuesday, Feb. 23 premiere at 10/9c on the History channel.

“We’re very similar to the characters we play in that show,” Allen said.

We’re not sure if he meant “Tool Time,” the show within a show, or “Home Improvement” itself, which a bunch of people mistakingly refer back to as “Tool Time.” Either way, he’s referring to the characters Tim “The Tool Man” Taylor and Al Borland.

“We don’t like to ask questions we don’t know the answers to,” Karn said. “My dad was a builder, my grandfather was a builder. I’ve always really respected that part of society.”

“Things break around the house and sometimes you don’t want to throw it away because it might be just a little, tiny thing that will fix it and it’ll work perfectly instead of going into a trash heap,” Karn said. “We’ve all had forms of this kind of a show in our heads, but Tim was able to bring it to fruition.”

“Assembly Required” will feature a series of “makers” who compete from their own home shops to create “insane builds with their bare hands” while both Allen and Karn pop in virtually to “deliver colorful commentary and oversee their work across two challenge rounds,” per the cable channel.

There to answer the questions that Karn and Allen can bring themselves to ask is woodworking DIY YouTube star April Wilkerson, who serves as the duos source on the “how and why” of each build.

Here’s how the season will go down, per History:

Round one consists of the “make-or-break challenge” where all three makers have 90 minutes to build an item of Allen and Karn’s choosing while using the items specifically curated for them in their “mystery crates.” Round one builds this season include a fire extinguisher, water fountain, treadmill and handheld vacuum to name a few. All three makers will test their final constructs for the guys with only two moving on to round two to compete in the “run-with-it challenge.” Here they will have five full days to construct something that has never been created before by using the contents of another “mystery crate” as well as parts from their round one build. What the final two don’t know is Wilkerson will throw a proverbial “wrench” into their plans with “April’s Secret Challenge,” covertly tricking up one of the parts, so it will require a surprise repair. This ensures they aren’t just builders and inventors but also fixers. The final two builds will be shipped to Allen’s workshop where he and Karn will personally test each creation based on three criteria — quality, design and functionality. The winning maker takes home $5,000 in cash and the ultimate bragging rights.