*SPOILERS FOR SEASON 3 OF Never Have I Ever BELOW!*

It’s the last day of school at Sherman Oaks, which means it’s time to say goodbye to everyone for the summer…or maybe even longer. The season 3 finale of Never Have I Ever might surprise some fans, but if you’re reading this, it means that you have either (1) already seen the episode and want a recap or (2) you’re looking for major spoilers. Either way, buckle in, because this finale gave fans plenty of surprises leading up to the show’s fourth and final season.

Here’s the ultimate recap of Never Have I Ever season 3 finale ending.

How does the Never Have I Ever season 3 finale start out?

As we mentioned, it’s the last day of school, and Devi is almost officially a senior! But she is surprised when Principal Grubbs calls her over to chat about something. Principal Grubbs reveals Devi got into a special one-year program at the Shrubland School, a boarding school in Colorado. While it can be her golden ticket to ultimately get into Princeton, it means Devi wouldn’t be able to stay at Sherman Oaks for her senior year.

In science class, Devi tells Ben and he says it would be a good chance for her and she shouldn’t give the opportunity up. Afterwards, she hangs out with Eleanor and Fabiola, who are excited but sad they wouldn’t spend their last year of high school together. Later, Fabiola surprises everyone by admitting she had sex with Addison, and Devi points out that she’s now the only virgin left in the trio. 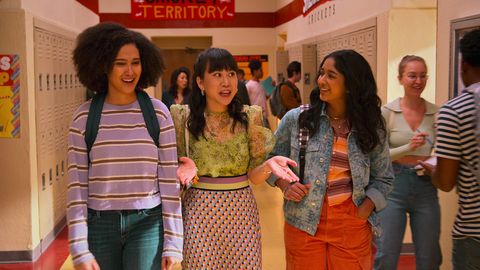 They all get together with Aneesa, Trent, and Paxton to talk about Paxton and Trent graduating. Trent, seemingly nervous about something, immediately gets up and walks away. Eleanor says he’s in denial of everything changing, especially knowing that Paxton will be attending college in Arizona. Aneesa congratulates Paxton on being voted the class speaker but he gets upset when he realizes the only reason they voted for him is because he’s hot.

How does Devi tell her mom the big news?

The Vishwakumars get together for dinner, and Nalini reveals she got a phone call about Devi getting into the Shrubland School. Mr. Kulkarni is also there and points out it’s super hard to get into the program. Devi says she’s made up her mind not to go and Nalini says she’s not ready to let Devi go off on her own yet. After dinner, Kamala talks with Nalini and asks her to reconsider Shrubland because it could be a big opportunity for Devi. Nalini has a flashback to when Mohan wanted her to have the best academic opportunities, and she immediately tells Devi that she booked them plane tickets to go visit Shrubland.

Devi talks with Dr. Ryan and says she doesn’t want to be away from her friends during senior year. Dr. Ryan encourages her to give Shrubland a chance during her visit and notes that she has outgrown her freshman year dream of dating Paxton and being popular, so it might be time to move on to something bigger.

Over at Paxton’s garage, Eleanor questions Trent after finding out that hasn’t picked up his cap and gown, but Trent doesn’t respond. Paxton works on his graduation speech and Eleanor asks if he wants help with it. He declines saying that for once, he knows exactly what he wants to say. 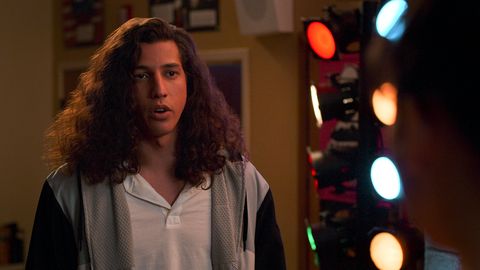 During her Shrubland School visit, Devi is surprised that she seems to like it. She admits to Nalini that she feels like she would fit in at the school and decides to go, which excites her mom. Meanwhile, Ben bumps into Margot in the art room and she says that she’s single. He says he would go on a date with her, so they make plans to go out.

How does Devi tell her friends she’s leaving?

Before graduation, Devi tells Fabiola and Eleanor about her decision. While they’re sad they won’t spend senior year together, Fabiola points out that they still have the summer.

As the class of 2022 starts walking in for their graduation ceremony, Eleanor confronts Trent and tells him that he’s missing his own graduation. Trent finally reveals that he actually failed and has to repeat his senior year. He tells Eleanor that he hid it from her because he was afraid she would be disappointed. But Eleanor smiles and says she’s actually excited over the news because it means they’ll get to spend another year together at Sherman Oaks.

Paxton takes the stage to make his big speech and immediately tells his class that despite the fact they hoped he would do something fun and sexy, he actually wants to talk about hard work and all he’s done to make it to graduation thanks to Devi. He encourages his class to push against labels and also invites the valedictorian of his class to say a few words as well. After he steps away from the podium, Devi realizes she no longer has feelings for Paxton. 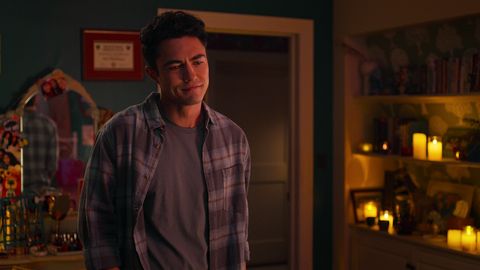 Out in the hallway, Ben overhears Eleanor talking about Devi leaving for the Shrubland School. He tells Devi that he actually doesn’t want her to go and he’ll miss her a lot. She starts to have feelings for him again, but Paxton interrupts their moment together. They both congratulate Paxton on his graduation and speech, and Paxton personally thanks Devi for everything. She thanks him back for everything she learned during their relationship and for helping her cope with the death of her dad. Paxton’s parents come over and congratulate him, which causes Devi to realize that she always lived thinking about the future, and she wants to start living in the moment.

What does Devi do next?!

Devi walks home and sees Nalini outside. She gets emotional thinking about everything they’ve been through and tells Nalini that she doesn’t want to go to Shrubland after all. Nalini says it was what her dad would have wanted, but Devi says he would have wanted them to be together for as long as they could. Devi says she wants to spend more time with her, and Nalini (jokingly) tells her she gets one more year. 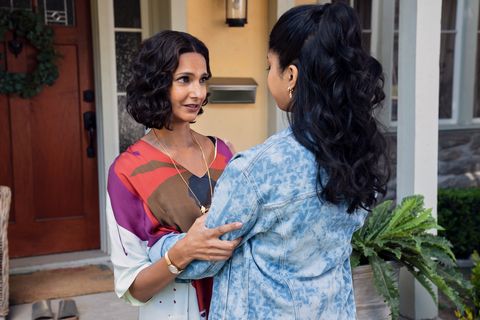 While Devi feels like she has moved on from her previous hangups and is now ready to follow a new path, she finds something in her pocket that reminds her of her past. The scene shifts to Ben’s house, where Devi knocks on his door and hands him the old note he gave her for “One Free Boink.” He’s surprised but lets her in his room and the two kiss before the door closes and the season ends.

What does this mean for season 4 of Never Have I Ever??

The good news is we already know the show will be back for a fourth season. The bad news is that season 4 will be the show’s last. This means fans will get to see the fallout of Devi’s decision to sleep with Ben, who *also* seems to have a date with Margot that he may or may not have forgotten about. Does this mean we have a new love triangle on our hands? Something else to keep in mind: These Sherman Oaks seniors will have to make big decisions about where they want to go to college soon and how they want to spend their last year together. So get ready, because a lot is definitely going to happen in the show’s fourth and final season.