As all parents know, there are three tiers of children’s TV. At the bottom, there is the “Please, just please, give me 20 minutes to finish this” tier — shows you throw on in the hope they’ll anesthetize your child into silence for the amount of time it takes to just make this goddamned call to the pharmacy, please.

The middle tier is the “Huh, this is pretty cute” level — shows with a little sass and verve that you don’t regret displaying to your child’s still-developing sense of self: the “Octonauts” and the “Storybots” and “The Muppets.”

The top tier, inarguably, is “Sesame Street.” Sweet, kind, watchable even for adults, full of smarts and in-jokes and characters that make mistakes but learn from them in a way that isn’t cloying.

And now “Sesame Street” has a companion in that top tier. Netflix, Higher Ground Productions, and creators Erika Thormahlen and Jeremy Konner have done something truly special with “Waffles + Mochi.” It’s the ethos of Michelle Obama’s work as a first lady on childhood health transformed into a show that’s part “Chef’s Table” food travelogue and part totally unhinged “Drunk History” homage — and one that’s all wrapped in a big, diverse, inclusive hug from “Sesame Street.”

The set-up: Waffles, a half yeti, half frozen waffle — go with it, haters, it works — and Mochi, a… mochi, strawberry to be exact, travel from the Land of Frozen Food to learn how to become chefs while using fresh ingredients. They are hired by Mrs. O at her supermarket, and each episode, the duo are sent off in their flying shopping cart to source ingredients from around the world and meet chefs who use them. During their travels they also hang out with local schoolchildren who talk about their relationship to food, and how it is influenced by their families and peers. The rest of the half hour is packed with exuberant animated interstitials, sly guest stars, and Maya Rudolph doing her best Maya Rudolph on the theme song.

The puppetry, led by Michelle Zamora on Waffles, is, not to put too fine a point on it — and cover your child’s eyes here — fucking tremendous. Konner was co-creator of “Drunk History,” and the dynamic (drunknamic?) storytelling ethos of that show is very evident here: Can a puppet ride a llama? I mean, why the hell not? Should a puppet crack an egg, and would the resulting dry cleaning bills decimate Netflix’s quarterly earnings? Yes, and maybe? Will they just shove all kinds of delicious street food, restaurant food, and home-cooked food into Waffles’ mouth? They do, and according to the press notes they fed Zamora the dishes at the same time so it would influence her performance. 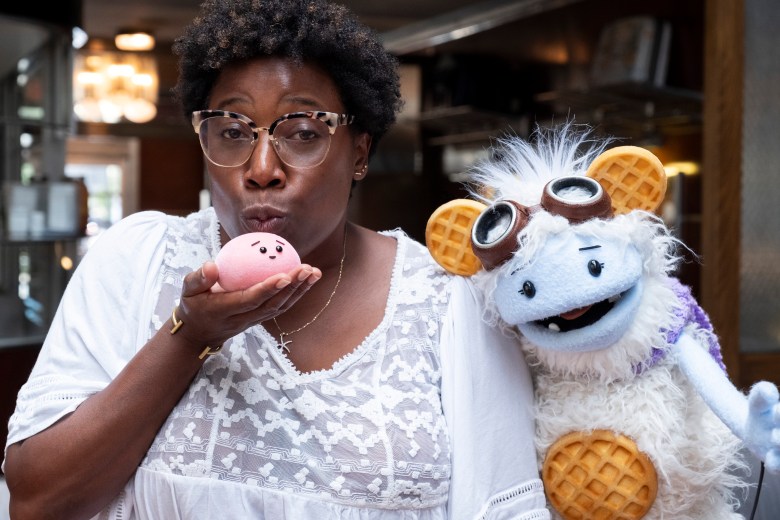 This is all captivating for both adults and kids. My six-year-old son, with literally zero cajoling, agreed to serve as co-critic with me in watching all 10 episodes. He loved it. LOVED IT. Won’t stop talking about it. Every time we try to, God forbid, gently introduce a leafy green down his gullet, he now resentfully stares at his plate and mutters the show’s tagline: “Listen to your vegetables, and eat your parents.”

His four-star review is tempered a bit with a few concerns: Waffles and Mochi appear in a scene to have earned the mushroom badge before Mrs. Obama gave it to them. (This was an excellent opportunity to try to explain continuity errors to a child and watch him wander out of the room, bored.) And, overall, the mushroom episode itself was a little scary. (It’s an ode to “Stranger Things,” because mushrooms are from the upside down. Get it? Get it?) He also would like more of Chef José Andrés doing the blender dance.

What I thought remarkable was that my son didn’t have any idea who Obama was as he watched. To him, she just seemed like another genial children’s television host, cracking jokes with a high-strung bee puppet and encouraging Waffles and Mochi in their adventures. Congratulations to you, former First Lady Michelle Obama, bestselling author, Grammy and Oscar winner, Princeton and Harvard Law alum, fashion and hair icon, your list of talents now includes the capacity to hold a sightline with a puppet.

I kid, but only a little. One of the most incisive comments made about “Sesame Street” is that when the big lesson of the episode is delivered, it’s important to remember that for some of the children watching, it may be the only time in their lives that they hear that message from a sympathetic and empathetic adult. You are special, you are loved, you are worthy. It’s better to receive it in two-dimensional form than not at all.

At the end of the egg episode, Obama explains that you can use cracked egg shells as tiny vases for seed-starting “because you can make use of old things, even when they’re broken.” Coming at the (hopeful) ebb of a pandemic that devastated the country’s most vulnerable communities, and coming from a woman who, at times over the past four years, seemed like a rare vestige of sanity from the time before things fell apart, before the center could not hold — this hit hard.

When my son asked me why I was crying, I said it was because Mochi was so cute.

“Waffles + Mochi” is now available to stream on Netflix.