WandaVision’s first two episodes’ premiered on Disney+ on Jan. 15 to a lot of praise. It didn’t really explain much, but rather started right from the beginning of Wanda Maximoff and Vision’s fictional American sitcom.

Regardless of the fact that fans don’t know how they got there or why they’re there, yet, it’s a lot of fun. And these first episodes were filmed in front of an audience, which is something that Paul Bettany (Vision) wasn’t too sure about at the beginning. [Spoiler alert: Spoilers ahead for WandaVision Episodes 1 and 2]. 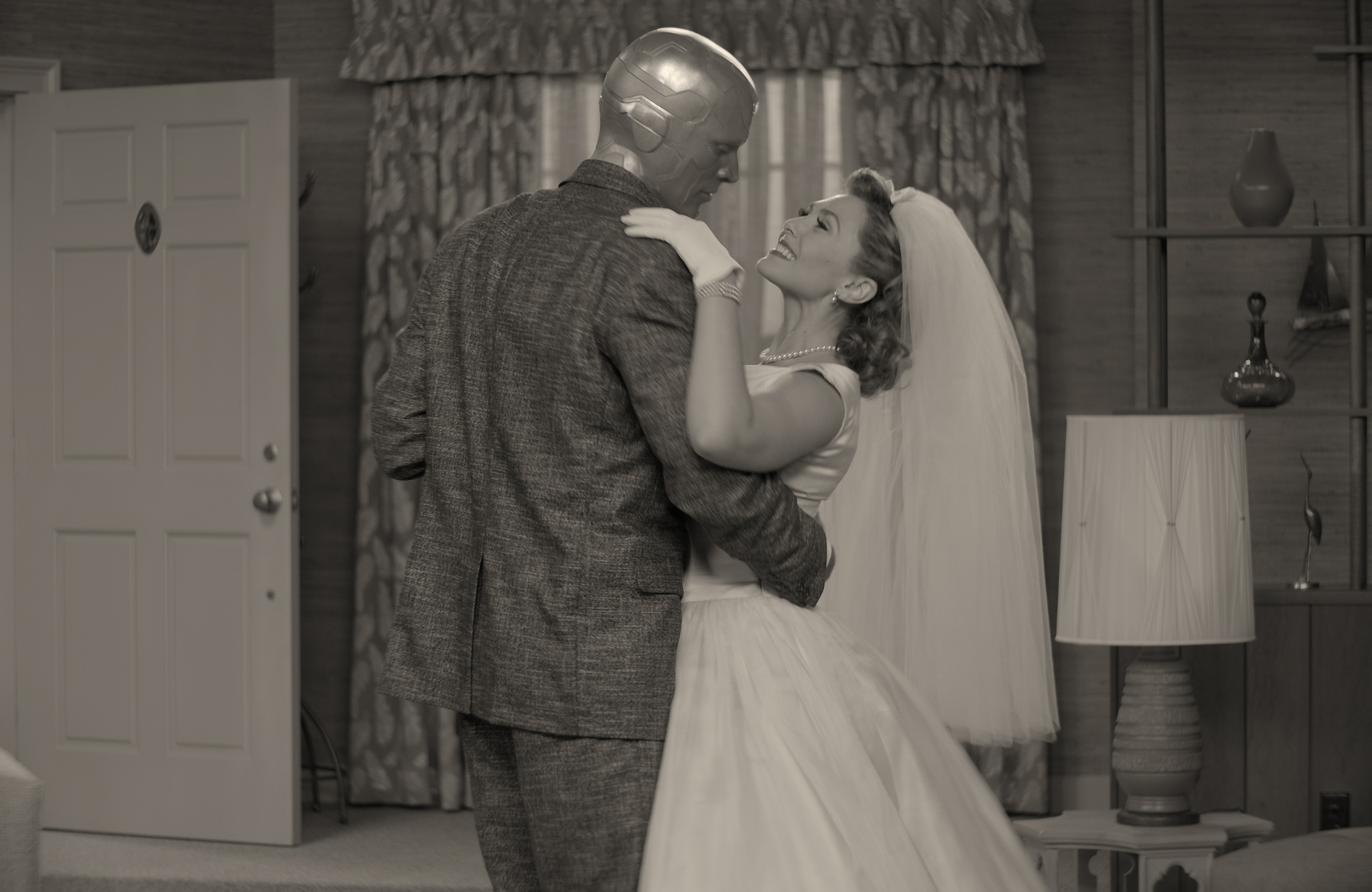 So the viewers at home all know they’re watching WandaVision the Disney+ show, but Wanda and Vision themselves are in a show of the same name. The sitcom is a play on sitcoms in the ‘50s and ‘60s, with the theme song and opening credits referencing Bewitched.

It leans into the heightened comedy of the time, the stereotypical male and female roles of the household, and the show also has the laugh-track that was very common on those comedic shows. But instead of just using a track, WandaVision was actually filmed in front of a live, studio audience.

In a featurette about the making of the series, Bettany states that it was nerve-wracking and a couple of clips show the audience’s interaction. But, just as Kevin Feige said in the video, nothing is as it appears in the Marvel Cinematic Universe, so what is really going on within the sitcom versions of Wanda and Vision? Only time will tell.

All of the times Bettany and Elizabeth Olsen have played their MCU characters have been on the big screen and not to an audience. Essentially acting in front of this crowd and for a show would be like putting on a play rather than filming a big-budget movie; a totally different experience.

So it’s not a surprise that Bettany was a bit hesitant at first to do such a thing even for his character of Vision.

“I was really resistant to the idea. I really dug my heels in,” Bettany recalled in an interview with BuzzFeed on Jan. 15, stating how nervous he was. “And finally, I just yielded and we were doing it. And just running around like idiots and bumping into Kathryn Hahn at the prop table and then… I felt like we were all in school doing a school play…”

But, “running around backstage” did end up being his favorite memory of shooting, and he (of course) went through with the project. He said that it “just felt really great” in the end.

As for Olsen’s favorite memory, she loved seeing the special effects team figure out how to make the “practical gags” work out, mostly because it was so different from typical “Avengers” stuff.

“Our special effects teams were used to blowing things up and setting fire to things and creating fog and wind, and watching them become puppeteers of just the kitchen items that were floating in the air,” Olsen said, was the best part. She especially liked when they had to figure out how to get a dishrag to “realistically” dry a cup on its own.

Olsen was also ‘terrified’ of performing in front of an audience

It’s true; the sitcom energy of WandaVision is such a different dynamic than a full-on, grueling, and grim action movie like Avengers: Endgame. But the comedic content didn’t cushion the live audience aspect for Olsen either, who had a similar mindset to Bettany.

“I thought it was terrifying. I was like completely freaked out,” she said. “I had so much adrenaline and so much first-day nerves going. And the only thing that was getting me through was knowing that I trusted [director] Matt Shakman, and that if I was a failure, he would let me reshoot it the next day.”

But, of course, it went well. Bettany described the filming “fast-paced” and between the show format and doing it in front of an audience, they had to “find their footing” pretty quickly. But it was a “freeing feeling” more than anything for the actor.

And while it is a really funny show (so far, although, things look like they could get disturbing really quickly), the two actors couldn’t “induldge” in giggles between takes. They had to film a lot, so quickly. However, they do have a lot of great moments and memories. And the fun parts did make it on camera, too, so fans can get that as the mysteries all reveal themselves.