A vampire’s birthday party had us feeling festive this week on What We Do in the Shadows… but then a shocking exit spoiled all the fun.

Thursday’s episode begins with Nandor held captive in the vampires’ subterranean prison cell after his fitness-inspired escape last week. Nadja says he’s “brainwashed,” but an exhausted Nandor lists off all of his roommates’ many shortcomings before declaring: He’s taking a “super slumber.” That’s a sort of vampire hibernation where they sleep for up to 300 years, waking up to a (hopefully) completely different world. As Nandor says his farewells, Nadja weeps, and Colin is upset, too — but only because it’s his 100th birthday and no one remembered. 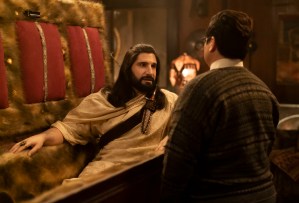 Guillermo is reluctant, but he does Nandor’s bidding and closes him up in his coffin, boarding up his room to seal him in. The others get a bit of good news, though: A delegation from the Supreme Worldwide Vampiric Council will visit tonight to check on their progress. (“This is a huge honor for us,” Laszlo admits, “but like all huge honors, it’s a pain in the nut sack.”) They can even combine the visit with a birthday party for Colin, so it’s a win-win. The vampire delegation will want to see Nandor, though, so they wake him up from his super slumber, but he’s grumpy and tells them to just say they murdered him before heading back to sleep in his coffin.

That night, the vampire delegation arrives, including Khandi Alexander as the red-clad Contessa, David Cross as Dominicas the Dreadful (with a “human lady friend” in tow) and Donal Logue as… Donal Logue. (He became an actual vampire after filming Blade, you see: “I sort of fell in love with the lifestyle.”) A grand blood banquet ensues, and Nadja tells the vampires she had to kill Nandor to maintain control over the Vampiric Council — and they approve! They want to see his dead body, though, so Guillermo has to bust open his coffin again, and Nandor pretends to be dead while the vamps examine his corpse… and his, um, “member.” (They’ve heard stories.) 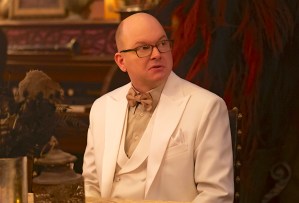 But hey, it’s Colin’s birthday, too, you guys! Laszlo makes a toast to his friend — a surprisingly soppy one, in fact. Later, he explains to Nadja: “Colin Robinson will be dead by sunrise.” In their research on energy vampires, Laszlo discovered that they have a life span of exactly one hundred years, and he kept the truth from him while making sure Colin had a lot of fun adventures in his final days. Colin falls ill and retires to his bedroom, and the other vampires gather around his bedside — despite the fact that he’s getting quite flatulent.

Guillermo wakes up Nandor one more time to say his final goodbyes to Colin, but it’s too late: He’s already dead. Nandor, grumpier than ever, thinks he’s not really dead, but when he tries to wake Colin up, he ends up caving the guy’s skull in, leaving his hand covered in goo. “Guess he wasn’t faking it,” Nandor says, adding: “This is very sad.” We agree! Is Colin Robinson no more? Is this the last we’ll see of Mark Proksch’s sublime work as the lovably dull energy vampire? (TVLine has reached out to FX for comment.)

Already mourning the loss of Colin Robinson? Drop your thoughts in a comment below.