It took six years for America to crown its first-ever Ninja Warrior.

On Monday night, Australians will find out if one of their own has finally conquered Mount Midoriyama after three gripping seasons. 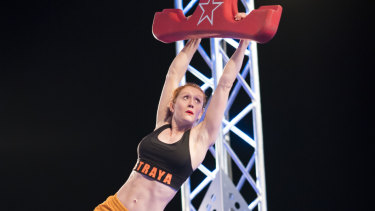 Australian Ninja Warrior isn't alone in not having an overall winner. Both the French and Swedish versions of the show haven't found a contestant able to complete every obstacle. The original format, Japan's highly-successful Sasuke series, went through four seasons before a competitor achieved total victory (and 13 more before someone was able to follow in his footsteps).

Olivia Vivian, a Perth-based cafe owner and former gymnast, is so far the only woman to make it into the Ninja Warrior grand final. This year marks her second shot at the top prize. She said the final course is incredibly hard, but not impossible.

"I think people forget I trained for fifteen years for gymnastics," she said. "But when it comes down to the course, we don't get to practice it. Our first run is our first run. There's no other chances."

So who has the best shot at becoming Australia's first-ever Ninja Warrior? So far, only two people have been able to complete American Ninja Warrior's final course: Geoff Britten and Isaac Caldiero. Both men are rock-climbers. In Japan, the first two winners were commercial fishermen. Both pastimes require above-average grip strength.

"Rock climbing is a fantastic attribute," Vivian said. "If your mind is set on winning Ninja Warrior, you absolutely need that upper body strength and that grip strength. Mental training is another attribute that's going to come in handy. In my personal opinion, training your mind is a lot harder than training your biceps."

Vivian said sprinters also have a natural advantage on the Ninja course due to their precision and strong legs.

"It took me six months to train to get up the warped wall because I have such little chicken legs," she joked.

Clem Vertigan, a personal trainer at The Compound, has helped top-ranking Ninja Warrior contestants prepare for the show.  Like Vivian, he believes a contestant needs a wide range of skills to succeed.

"Rock climbing is handy because you've got the grip strength, but you need to learn how to swing your body," he said.

"So ideally you're a rock climber with a gymnast background, or a gymnast with a rock climbing background. Carpenters seem to be pretty good because if they're swinging their hammers a lot they have pretty good grip strength. Some of our best ninjas have been carpenters.

"AFL footballers aren't too bad because they are reasonably lean but strong. A bit of cardio doesn't hurt. If you look at the guys who do well in Ninja Warrior, they tend to be between five-foot-six to about five-foot-ten. I don't think height's an issue – as long as you've got the power."

Vivian said she'll be back next year regardless of Monday night's outcome.

"I want to be the first female Ninja Warrior ever," she said. "That's where my mental game is. Australia, being only three years into this show, has done extremely well so far. I truly believe we're going to get someone up that rope."

The final episode of Australian Ninja Warrior's third season will air at 7.30pm on Nine on Monday, July 29.