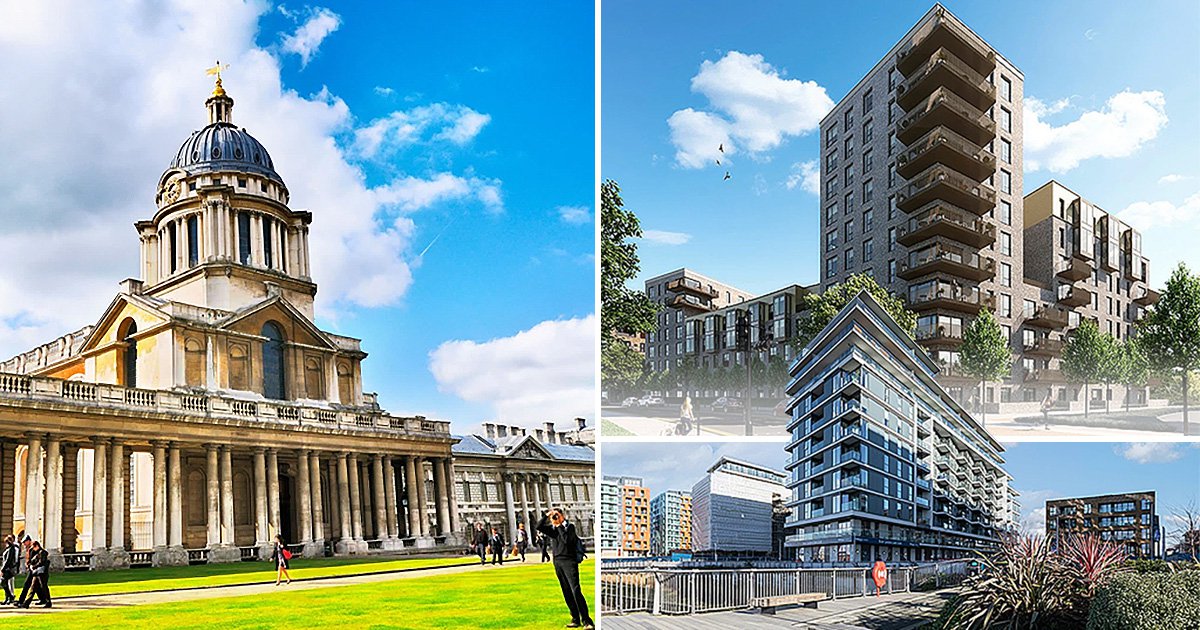 As home to Maritime Greenwich — one of only four UNESCO World Heritage sites in London, consisting of the old town centre, Royal Park and assortment of historically significant buildings — Greenwich has a head start over most other areas.

But its appeal doesn’t stop there. It hugs the Thames, has a brilliant market, eclectic shops and bars, museums and galleries and tons of open space where kids and dogs can let off steam.

Schools are good, the commute is quick and in 2017 it was crowned the capital’s friendliest place to live — and there’s no reason to suggest that’s changed.

Ever since Inigo Jones was commissioned to design Queen’s House in 1616, Greenwich’s striking and elegant architecture has been a talking point.

‘West Greenwich is the most expensive part, with lovely, mainly Georgian and Victorian, period homes, and Crooms Hill is widely regarded as the best road,’ says Guy Epps of Winkworth estate agents.

‘There’s been a shortage in supply of larger period houses coming to the market, which could be down to people deciding to stay put while there is a degree of uncertainty with the pandemic and the end of furlough.

Elsewhere, areas such as Greenwich Peninsula attract different buyers, mainly younger and wanting to live in contemporary flats rather than houses, and it tends to be cheaper than West Greenwich.’

What’s on offer in Greenwich?

Greenwich Peninsula is Europe’s largest regeneration scheme, where 15,000 new homes are being created alongside shops, restaurants and other amenities.

Studio, one, two and three-bed apartments are available at Upper Riverside, a neighbourhood boasting five prism-shaped towers with facilities including a gym, pool, sauna, cinema room and sun terraces, from £487,500.

67 Park Central, the latest phase at Greenwich Millennium Village, consists of 115 one to three-bed apartments, all with private outdoor space and many overlooking parkland or the Thames, from £447,495.

London Square Greenwich has 46 one, two and three-bed apartments in a striking Modernist-style building. Each has a balcony or terrace and space to WFH, from £520,000.

One, two and three-bedroom apartments are on offer at The Courtyard at Greenwich Square, with either a balcony or terrace and set around a landscaped garden square. They start from £450,000, via Savills.

More than half the homes in Maritime Apartments, the second and final phase of Bellway London’s The River Gardens, have now sold and the remaining one, two and three-beds start from £485,000, with London Help to Buy’s available.

And Hamptons is marketing two and three-bed modern townhouses at Hyde Vale, in the heart of West Greenwich which blend in with the surrounding period architecture, from £825,000.

What can I afford on the property ladder in Greenwich?

This very central one-bed first and second floor conversion has a sunny living room, separate kitchen and useful office space in the attic.

An extended and renovated, Tardis-like Victorian terrace in the catchment of Halstow Primary school. Has four beds and open-plan kitchen/diner.

Commuting time to Zone 1: 8 mins to London Bridge by train from Greenwich or Tube from North Greenwich station

How to get your Metro newspaper fix

Metro newspaper is still available for you to pick up every weekday morning or you can download our app for all your favourite news, features, puzzles… and the exclusive evening edition!