Why Is 'Insecure' Season 6 Not Happening? Issa Rae Is Low-Key Ready to Say Goodbye

Are you ready for the Insecure series finale? In January 2021, the team behind Insecure announced that season 5 is the final season of the HBO series. At the time of the announcement, series creator and star Issa Rae said they “always planned to tell this story through five seasons” and are “grateful that HBO believed in our show from the beginning and kept faith in us to see our vision through the end.” It’s over, guys. Who is Issa going to end up with?!

“It’s done now so nothing I can do about it,” Rae remarked to The Hollywood Reporter ahead of the season 5 premiere, promising fans that the ending would be “more sweet than bitter.” “We always talked about this journey that we wanted to follow from being insecure to being comfortable in your insecurities to being securely insecure.” 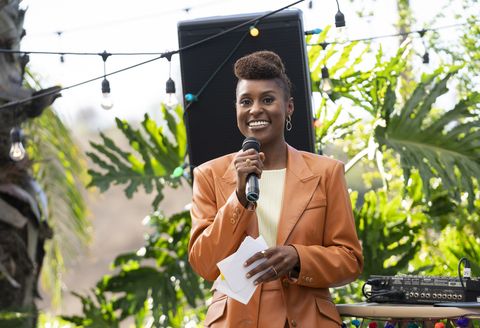 Insecure‘s showrunner Prentice Penny told THR that “It isn’t a show you can just churn out mass things. It’s like a shoe cobbler that makes eight shoes. It’s like these are the only shoes I make, and this is all I can make this year. That’s just our DNA. We never wanted to overstay our welcome.”

The silver lining, besides Rae and Penny giving Insecure the ending they always imagined, is that neither is going anywhere any time soon. In March 2021, Rae signed an eight-figure film and television deal (basically a five-year contract) with WarnerMedia, which is major major major. She already has a new series called Rap Sh*t coming to HBO Max sometime in the near future (it started filming in late 2021)… and did you know she’s gonna be the voice of Jessica Drew, a.k.a. Spider-Woman, in the sequel to the animated film Spider-Man: Into The Spider-Verse?! Rae is also set to star in a film made by the guy who wrote Luca and Me and Earl and the Dying Girl called Empress of Serenity alongside Bill Hader.

Meanwhile, Penny is the executive producer of the weekly late-night talk show Pause With Sam Jay on HBO Max—which was recently renewed for a second season. Also, if you love Insecure and haven’t yet checked out Penny’s 2020 comedy Uncorked on Netflix, you gotta.

Last, but obviously not least, we still have the final season of Insecure to devour. The fact that the show is officially ending is sad, but great things are to come and the show will probably (hopefully!) stick that landing in a way that’s super satisfying like only Issa can.