As charming and lovable as our girl Alabama Hannah is, one of the four families from tonight’s hometown dates episode was NOT having it with her visit, and that family belonged to none other than aspiring musician Jed Wyatt.

It’s possible that Jed’s family was a little uneasy with Hannah because they knew about Haley Stevens, aka the girlfriend who Jed was STILL DATING when he went on the show, or it could be that they didn’t like being on reality TV (fair). Or maybe they just didn’t like Hannah! Either way, these were their very unimpressed faces when Hannah tried to toast Jed’s family at the end of her date: 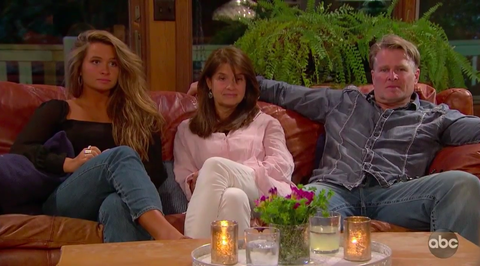 During the date, when Hannah asked Jed’s sister Lily how she felt about Jed dating her, Lily did not mince words and responded, “Him falling in love with you…I’m not sure that it’s a good thing.”

And when Jed was talking to his mom Gina about potentially getting engaged to Hannah, she told him, “It doesn’t all feel very realistic to me but you’re the one living it.” Jed tried to convince her that it is real (sure, buddy) by telling his mom that he’s fallen in love with Hannah, and she replied, “Really? I’m surprised to be honest…I think this is crazy.” Not to mention that in Gina’s toast at the beginning of the date she said, “when you stick to your truth, it’s beneficial to everybody,” which can totally be read as shading Jed, who is maybe not sticking to his #truth at the moment!

And that other less-than-thrilled face in the above photo, aka Jed’s dad Jerry? He was a lot more concerned with Jed’s music career than his reality TV love interest (it’s almost like he didn’t get the memo that Jed went on the show for his career??), and said, “It’s a little surprising. I still don’t have my head around all this.”